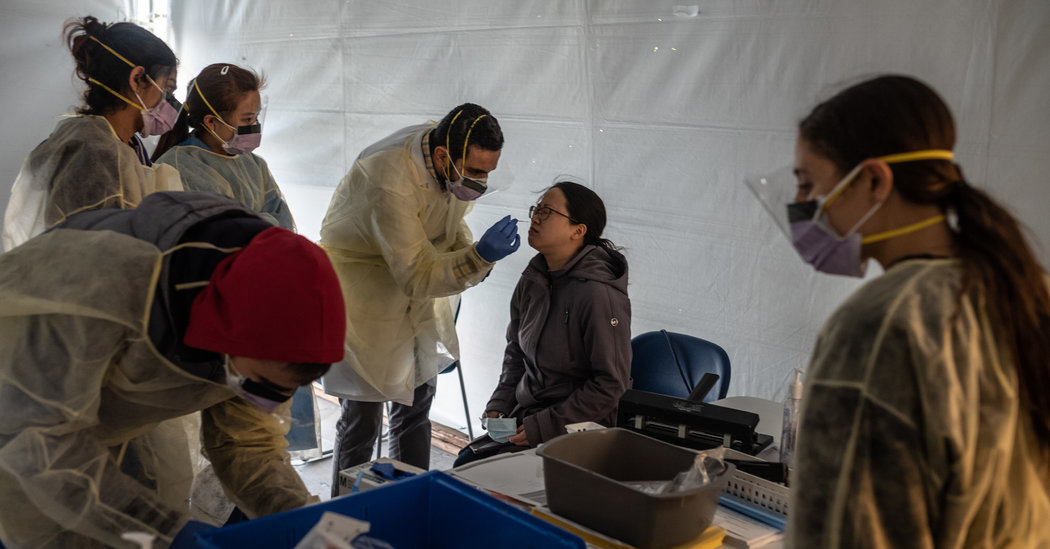 With so much still uncertain about how widespread hospitalizations for coronavirus patients will be around the United States, a new analysis says premiums could increase as much as 40 percent next year if the pandemic results in millions of Americans needing hospital stays.

“Health plans went into 2020 with no hint of coronavirus on the horizon,” said Peter V. Lee, the executive director of Covered California, the state insurance marketplace created under the Affordable Care Act, which conducted the analysis. To protect businesses and individuals from sharply higher rates, he supports a temporary federal program that would cover some of these costs.

“No insurer, no state, planned and put money away for something of this significance,” Mr. Lee said.

So far, some 94,000 people have become infected in the United States, according to official counts, and at least 1,400 have died. In New York state alone, nearly 1,600 patients were in intensive-care units as of Friday morning and the numbers have been rising all week.

Mr. Lee’s organization estimated the total cost to the commercial insurance market, which represents the coverage currently offered to 170 million workers and individuals through private health plans. The analysis does not include costs for people enrolled in government programs like Medicare and Medicaid.

Depending on how many people need care, insurers, employers and individuals could face anywhere from $34 billion to $251 billion in additional expenses from the testing and treatment of Covid-19. according to the analysis. At the high end, the virus would add 20 percent or more to current costs of roughly $1.2 trillion a year.

While the bill before Congress would provide hospitals some financial relief, it may not result in any change to how much hospitals charge private insurers and employers for care, he said.

Insurers and employers are already prodding Congress to consider helping them pay for the crisis by setting up a special reinsurance program that would cover the most expensive medical claims. The federal government would fund the program to lower the amount being paid by employers and insurers.

While insurers have enjoyed strong profits in recent years, they say the cost of the pandemic could be overwhelming, especially to employers and workers already struggling to pay for coverage.

“As more people seek coverage and care due to this pandemic, this temporary, emergency program would protect Americans from the consequences of potential catastrophic costs,” the executives of the two major health insurance trade groups wrote Congress earlier this month.

Employers and others have launched a new group, the Alliance to Fight for Health Care, that includes many of the same parties that worked together to defeat the enactment of the so-called Cadillac tax on high-cost employer plans. They, too, recently told lawmakers they think a federal reinsurance program might make sense.

Without help lowering their costs by having the government pay for the most expensive hospital stays, Mr. Lee warned that insurers are likely to seek rates that are double their additional costs from the virus. If their costs go up 20 percent, Mr. Lee says rates could jump as much as 40 percent in 2021.

“These increased costs could mean that many of the 170 million Americans in the commercial market may lose their coverage and go without needed care as we battle a global health crisis,” Lee said in a statement, outlining his group’s proposals.

While state government insurance officials may push back, they may be inclined to allow the increases if they believe companies would need the additional revenue to pay medical claims. “Regulators would take a sharp eye to big premium increases,” said John Bertko, Covered California’s chief actuary, but if insurers “chew up half or more of their solvency reserves, regulators will say they need to build them up.” The group warned that smaller insurers could be especially at risk.

Rate increase requests still might be difficult for some states and consumers to swallow. The nation’s largest insurers, which include giant for-profit companies like Anthem, CVS Health and UnitedHealth, reported billions of dollars in profits last year, and analysts say these companies have abundant capital to absorb any losses because of the pandemic. Since the enactment of the Affordable Care Act, health care inflation has remained in the single digits.

Increases in medical costs of 3 to 4 percent “would be manageable by most insurers,” concluded a recent analysts at S&P Global Ratings. If costs were to go up by 10 to 12 percent, the analysts say the stress on the companies would be greater, with insurers reporting losses and forced to use their capital reserves to pay claims.

But some actuaries are predicting costs are likely to be much lower. One actuary said insurers have told him that they have no plans to raise rates sharply because the do not think the pandemic will change their predictions about ongoing medical expenses once it has run its course.

And other actuaries are coming up with estimates that are lower because they have different assumptions about how many people might be hospitalized and whether that would be offset by the declines in medical care for other illnesses or surgeries as people stay home and elective procedures are postponed indefinitely. The cost of the epidemic could be tempered if people don’t seek other kinds of care, like a routine check up or hip replacement. That also happened during the 2008 recession, when people postponed any type of care and procedures.

“We think claims are really going to drop off over the next month or two,” said Edward Kaplan, a senior vice president at Segal, which advises clients on their health benefits. He thinks his clients in New York, which is being particularly hard hit by the virus, could see additional costs of 4 to 5 percent. In other areas, if there are many fewer cases, costs could be less.

Another big unknown is whether people will be able to get treatment for Covid-19 or other illnesses, in spite of needing care. Depending on the course of the pandemic, health systems could become so overwhelmed that they have no available hospital beds or staff to treat patients who would otherwise receive care.

If patients can’t get care, overall costs could be much lower than they would otherwise be, said Trevis Parson, chief actuary for Willis Towers Watson, which advises companies on benefits. His group is estimating costs could increase by as much as 7 percent because of the pandemic.

Even then, how much the private sector will pay is unclear, especially if the government starts setting up hospital beds and temporary hospitals in various regions, and supplying staff to treat patients.

Another unknown factor is how much it will cost to treat those coronavirus patients who are hospitalized. “Everybody is still guessing what a coronavirus hospitalization stay looks like,” said Mr. Lee of Covered California.

While there are some estimates hovering around $20,000 for a hospital stay based on a typical pneumonia case, his group is estimating that the average could be closer to $72,000 for severe cases. New York State is already reporting that patients with severe cases are staying on ventilators much longer than those with pneumonia might.

How employers and insurers will ultimately react to any spike in costs is also unclear. While health care costs have historically risen by double digits in any given year, companies have been caught off guard by the dramatic change in circumstances. “It’s hard to think of anything that rivals this,” Mr. Parson said.