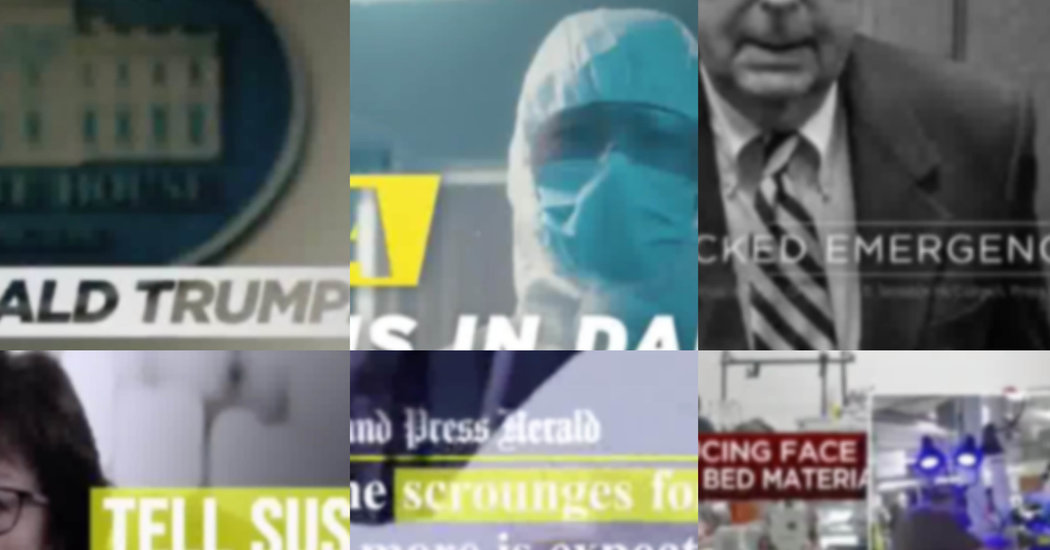 For much of the past six weeks, political campaigns were reluctant to focus too heavily on the coronavirus outbreak. Though some outside groups started to criticize President Trump’s handling of the crisis, the virus was largely considered off-limits to many campaigns, which worried about politicizing the unending tragedy.

That, however, has changed.

Now, more than 50 percent of all political ads on TV are about the coronavirus, the first time that a majority of ads were focused on the outbreak, according to Advertising Analytics, an ad tracking firm. There were 33 unique ads centering on the virus that aired last week, spanning the presidential, Senate and congressional elections.

Of course, some groups have been advertising about the pandemic for weeks. But five weeks ago, as states like New York, New Jersey and California shuttered schools and announced stay-at-home orders, less than 2 percent of ads touched on the coronavirus. Now, 54 percent are about the coronavirus.

For Democratic candidates and liberal-leaning groups, one issue has dominated recent ads: the lack of personal protective equipment — commonly referred to as P.P.E. — for front-line medical workers. Those ads have characterized the shortage as a failure of the Trump administration.

Priorities USA, a Democratic super PAC, spent roughly $380,000 last week on an ad that spliced Mr. Trump’s past statements dismissing the need for more personal protective equipment with pleas from medical professionals begging for masks, gowns and other supplies.

The ad, which aired in Michigan, Pennsylvania and Wisconsin, is part of a $7.6 million campaign by the group to “continue to air the facts and the truth and hold the president accountable,” as Guy Cecil, the chairman of the group, said when the ads were released. Priorities USA has also pledged $65 million in initial buys through November.

Majority Forward, one of the leading outside Democratic groups focused on the battle for the Maine Senate race, spent $150,000 last week on ads highlighting equipment shortages in the state’s hospitals, with a narrator referring to Maine’s Republican senator and lamenting that “once again, Susan Collins defends the president.”

Republicans are also fighting to claim the mantle of protecting health care workers. In North Carolina, a group called the Taxpayers Protection Alliance began airing an ad supporting Senator Thom Tillis that thanks him for “caring for the doctors that care for us.”

And Ms. Collins, who has aired six different ads on the coronavirus, has one ad dedicated entirely to thanking the “real heroes of the coronavirus crisis,” which makes absolutely no mention of her campaign or political efforts.

Larry McCarthy, a Republican ad maker who is running the ad campaign for Ms. Collins, said that the lag in coronavirus-related advertising could partly be attributed to simple production times.

“Usually, the ads that viewers are seeing this week on their TV sets were made a week or two or four weeks ago,” Mr. McCarthy said. “Now, because of all the stay-at-home restrictions, you’re seeing ads shot on iPhones and Zoom and everything else because you really can’t go out and take a big crew around a given state.”

Ms. Collins’s Democratic opponent in Maine, Sara Gideon, is airing a 60-second ad that features highlights from a recent forum, conducted over Zoom. The grainy desktop camera resolution and awkward angles have come to define so many meetings happening these days.

While many campaigns have focused on the front-line workers, the groups working to re-elect Mr. Trump have a different focus: Joe Biden.

The Trump-aligned super PAC America First Action made its first foray into the election this month by announcing a $10 million buy, and spent just under $350,000 on two ads that seek to paint the former vice president’s past statements on China as problematic, with shaky allusions to the virus’s origins.

There is, however, a brief defense of Mr. Trump in one ad, praising his decision to close travel from China in January, when a narrator proclaims, “President Trump took action.”

Ad of the week: One photo, 30-seconds

It’s a relatively candid shot of Senator Mitch McConnell, a black-and-white image of the Republican majority leader emerging from behind a door, likely somewhere amid the Capitol complex. For 30 seconds, it is the only image the viewer sees. A very slow zoom crawls forward, as dramatic, ominous music tracks a narrator in the background.

With many Democrats focusing their criticism squarely on the White House, Mr. McConnell is also up for re-election. And his Democratic opponent, Amy McGrath, is attacking the majority leader for the federal government’s response to the pandemic.

The message: Being majority leader is an immensely powerful position, and Ms. McGrath is making the argument that Mr. McConnell has squandered his power in response to the coronavirus outbreak. As a narrator infers that Mr. McConnell is taking a “victory lap” on the response to the outbreak, the estimated death tolls and job losses scroll across the bottom of the screen.

The takeaway: The single photo and black-and-white tone evoke an aura of the Washington “back room deal” and infer that it wasn’t one made with the goal of combating the coronavirus. And in a media environment where continually scrolling doomsday headlines flash across the screen in a constant loop, pausing to focus on just a single picture could actually break through.

Were you forwarded this newsletter? Sign up here to get it delivered to your inbox.