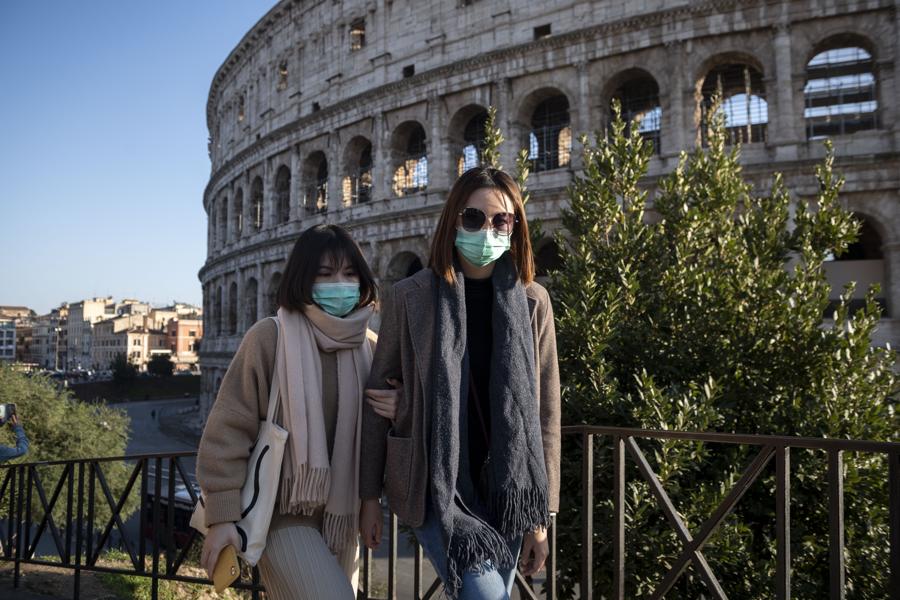 Italy is now the “epicenter” of the nasty Covid-19 virus in Europe. (Photo by Antonio Masiello/Getty … [+] Images)

You have to trust someone on the coronavirus outbreak. And very few are comfortable with China’s official numbers, now approaching 80,000 in China. Official word is that China is doing all it can, and is doing a good job. It’s not yet a pandemic, the World Health Organization (WHO) has said. Outside of China, there is really no other authority on this. If the coronavirus is to be stopped, it’s all on China to get it done.

Italy’s surprise blowout of the new coronavirus, dubbed Covid-19 by the WHO, shows that — despite the country bursting onto the scene over the last few days — their mortality rate is similar to China’s. This is actually good news.

If this turns out to be true in other countries where public health data is more trustworthy, then one can assume that China is not entirely underestimating the mortality rate.

The main question therefore becomes whether they are underestimating the number of cases, which may have led to unreported deaths. This is something markets will have to come to terms with being unable to know for sure.

In the meantime, we only know what we know.

What we know is that some 229 people have contracted the respiratory infection in Italy as of Monday night. Italy is now the European “epicenter” of Covid-19 with a reported seven deaths as of Monday evening. That’s the third highest death toll outside of China. Iran has reported 12 deaths. South Korea has reported 8 deaths out of 833 cases.

In Italy, roughly 3% of the confirmed number of cases ended in death as of Monday. But the number of new cases jumped early Tuesday to 270, so that has the mortality rate now at 2.6%.

In South Korea, it’s 0.9%. In Iran, it’s a whopping 19% though information out of Iran is harder to come by than it is in China.

Assuming Iran is an outlier, Italy’s mortality rate not far from the current rate in China of 3.4% based on mainland China’s confirmed cases of 77,660 and a national death toll of 2,663 as of Tuesday evening. 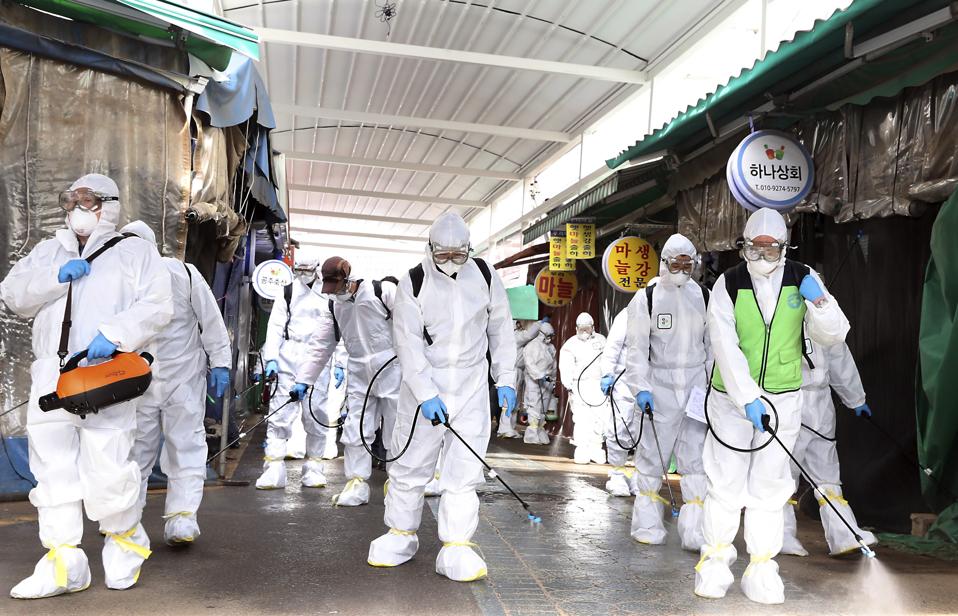 Workers wearing protective suits spray disinfectant as a precaution against the coronavirus at a … [+] market in Bupyeong, South Korea on Monday. South Korea has the second highest number of coronavirus deaths, after China. (Lee Jong-chul/Newsis via AP)

The death toll in Hubei province, the epicenter of the outbreak first spotted in December 2019, is 3.95% based on 64,786 cases and 2,563 reported deaths, according to data compiled by Johns Hopkins University

Is China getting this right?

At least 19 people, mostly seniors, died in a senior center in Wuhan. As of last Thursday, 11 seniors died from respiratory failure after recurrent fevers, a nurse at Wuhan Social Welfare Institute told Caixin Global, a Chinese business newswire. She said the facility didn’t have Covid-19 testing capability and many medical workers have had fever symptoms. Other symptoms include a dry cough and gasping for breath. If not tested, then the person is not counted by Chinese public health leaders as being a coronavirus patient.

The big fear is that the usual anti-viral medication does not work as well as it does in fighting other severe colds and respiratory illnesses like the influenza or pneumonia. No one wants to catch it. Around 200,000 Americans are hospitalized each year because of the flu, with the mortality rate between 4.2% and 10% of those hospitalized, based on the Center for Disease Control numbers.

Tell someone that 100,000 people in Beijing have the flu and factories wouldn’t close because of it. Subways would be filled to capacity now that the Lunar New Year holiday is over.

Tell them a few hundred people in their city have the new coronavirus and they will self-quarantine, or are forced to stay home by authorities still learning how best to cure people with the infection.

Beijing, a city of more than 20 million inhabitants, currently has only 181 open Covid-19 cases. Some 215 people have already recovered from it.

Markets panicked following news out of Italy this weekend. The Dow fell nearly 900 points at one point on Monday. The S&P 500 and the Dow will open higher this morning.

China’s Center for Disease Control warned that a resurgence in new infections could appear as the country gradually resumes social and business activities after a month-long suspension. Zeng Guang, the China CDC’s chief epidemiologist, warned on Sunday that the most vulnerable places to new outbreaks were at work and in schools. “I don’t dare to be too optimistic,” he said. 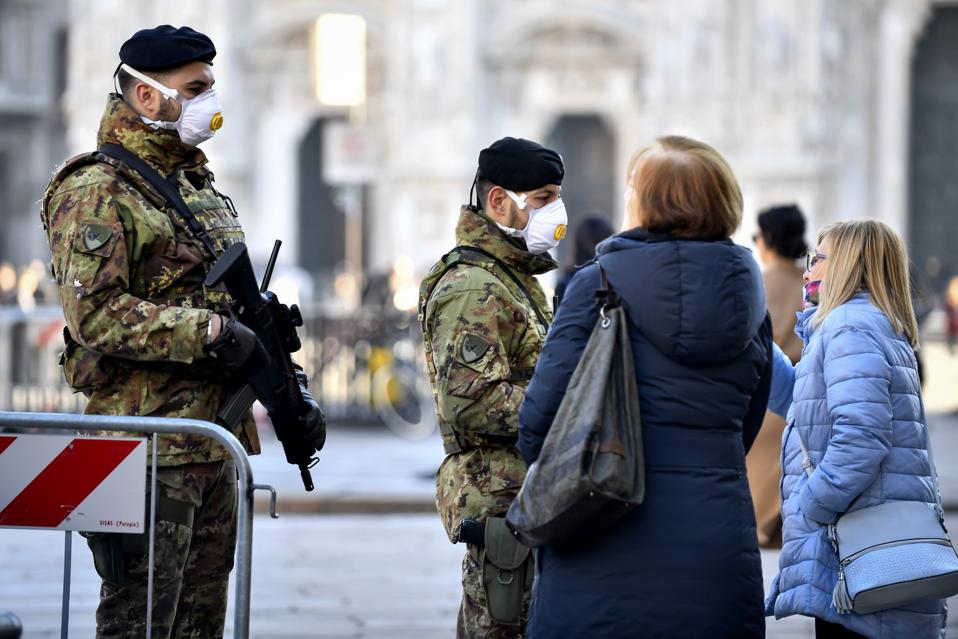 Italian soldiers wearing sanitary masks patrol Duomo square in downtown Milan on February 24, 2020. … [+] Over 200 people in Italy’s north have tested positive for the Covid-19 virus and seven of them have died. (Claudio Furlan/Lapresse via AP)

Bruce Aylward, an assistant director-general for the WHO reiterated Guang’s warning on Monday from Beijing that no one should be shocked if the case load rises as more people return to work and school.

“It’s important to keep in mind that these (infection) numbers remain low,” says Salman Baig, a fund manager for Unigestion, an asset manager not far from Geneva, Switzerland. “We are following the spread of the virus outside China closely, especially in countries with a high population density and less developed healthcare systems. Measuring the impact of the virus on economic growth is difficult at this stage. The lack of alarming headlines about supply chain disruptions as Chinese factories partially reopen is certainly a positive, but the fall in U.S. PMIs last Friday is concerning,” he says.

China’s central bank has pumped liquidity into the markets, and will continue to provide easy monetary policy to counter economic hardship caused by the epidemic.

“At some point, we will get past this and growth will re-accelerate,” says Kevin Philip, managing director at Bel Air Investment Advisors about investing abroad in this climate. “I feel like the next few weeks will be very telling. I may even increase non-U.S. exposure if those markets move down considerably out of fear,” he says.