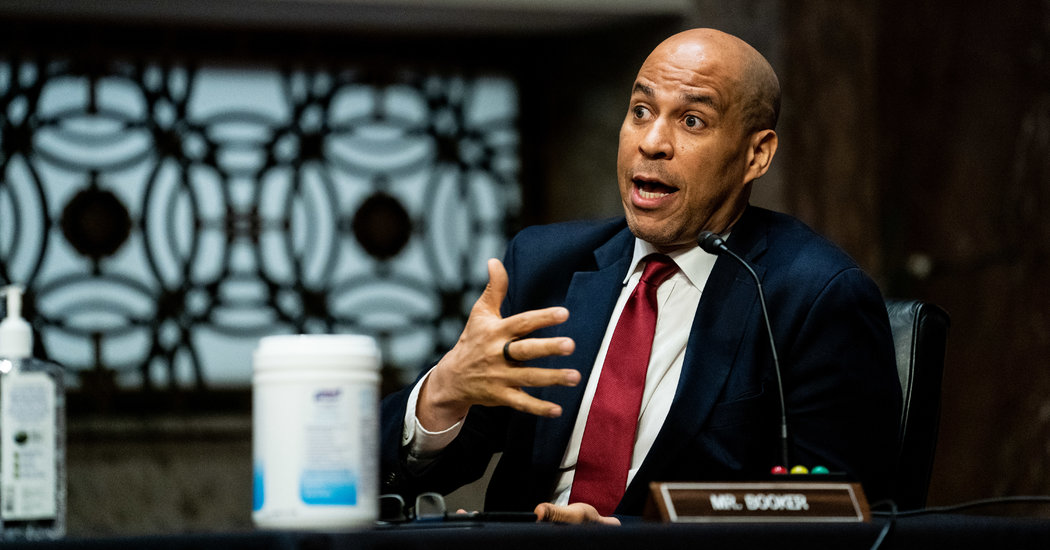 Senator Cory Booker of New Jersey has long made criminal justice core to his politics, a focus that began during his days at Stanford, continued through his two terms as mayor of Newark and eventually formed the backbone of his presidential campaign.

Now, amid a groundswell of protests against racism and police brutality, Mr. Booker, the longest tenured black Democrat currently in the Senate, finds himself at the center of a defining national moment. He also became a voice of outrage earlier this month when a bill making lynching a federal crime, which he helped write, was held up over the objections of one senator, Rand Paul, Republican of Kentucky.

We spoke to Mr. Booker about the shifting politics of race, his own experiences, and where this movement can go in the future. These are lightly edited excerpts from the conversation.

Far more than ever, in a very short period of time, millions of Americans are starting to say black lives matter. What do you make of that?

Do you worry that this might just be a moment that will pass?

I’m certainly hopeful that it won’t pass. There are signs of hope in America right now, to see in all 50 states, millions of people being involved in some kind of activism or protests, virtually or in the streets. You’re seeing diversity, a coalition of people from all ethnic backgrounds, ages, religious backgrounds. You’re seeing major organizations come out and speak not only to the issues of racism but to their own complicity or culpability in that. From NASCAR to the N.F.L., from major companies to colleges.

But we are only in the foothills of the mountain we have to climb and the work that we have to do. And the question ultimately is, How will systems from health care to education to criminal justice — the systems that have so disparately impacted Americans along race — how will they actually fundamentally change?

Are issues like health care and education getting attention during this moment?

They’re not getting enough attention. And the violence against black people is not just what we witness with George Floyd. It’s that race is still the biggest indicator of whether or not you are going to live near a toxic site, breathe dirty air, drink dirty water. Racism is the most profound indicator of what kind of education you get, about how economically fragile your family might be, about whether you’re food insecure. These are issues that are combined to create this distraught present.

I remember the column you wrote in The Stanford Daily in 1992 about being stopped by police officers as you drove over the George Washington Bridge. How often do you think about that experience?

Often. Often. I mean, look, I’m still very conscious when I’m not dressed like a senator, and even when I am, that I still could be one misunderstanding away from a very bad incident. But I also realize that I’m in a position of power to do something about these issues.

And, you know, my Newark experiences have profoundly shaped my perspective on these issues. We came in as reformers, and we really believed in good faith, with a majority black City Council and black mayor, that we were doing a real good job when it came to changing our police practices.

But we were confronted by a Department of Justice investigation. And it dredged up the data that we were not moving fast enough. And it is a testimony to these issues — they can’t be gotten rid of with good intentions. So, this has been a life’s work for me from the time I was in college writing about policing issues to the time I was a reformer as a mayor to the time I’ve been a United States senator.

And I almost feel, and it’s not the best word, but I almost feel a sense of shame that here I am, 30 years of adulthood since Rodney King, and the lessons that I got in my teenage years from African-American adults who wanted to make me afraid of police for my own safety, who wanted to teach me coping mechanisms, I feel just a sense of profound regret that I’m having to have those conversations with young black men in my life, my mentees or my nephews. And that is really hurtful to me that we’ve had three decades since that horrific beating of a black man who was so demonized, so stripped of his humanity, like so many black Americans have been in policing practices.

The history of policing in this country, and its treatment of African-Americans, is thoroughly documented for every generation of being so far short of the highest ideals of this country. It’s been an affront to the very dignity of the nation as a whole. You can’t be comfortable with this. And it’s our comfort with it that has allowed it to fester.

On the campaign trail you told people to come see your city of Newark. Its peaceful protests have made national news. Why do you think the city has responded this way?

I’m proud that I can go jogging in Newark and feel sometimes safer there with no security or anything like that — in my own community that many people are still afraid of — than I can in many other communities where people might not recognize a black man jogging, or follow them like we saw with Ahmaud Arbery. So, I love my community. I feel this deep loyalty to them.

Why do you think Rand Paul held up your anti-lynching bill?

I don’t know what he was thinking. Remember, Kamala [Harris] and I didn’t precipitate that conflict. He brought the bill up. And on that day that George Floyd was being memorialized.

I was very angry going down to the floor, that on this day in particular, he was choosing to have this confrontation. And it was a confrontation, and his willingness to stymie the passing of this legislation was deeply hurtful to so many Americans.

During the Democratic primary campaign, you had some critical words for former Vice President Joe Biden about his record on criminal justice. Are you at all worried that he’s the face of the party right now in this moment?

Well, I actually have been quite excited about Joe Biden in this last month. There’s something that he’s showing to me, that is so profoundly needed in our leadership in this country, which is humility and vulnerability. He’s showing vulnerability by saying, I don’t have all the answers. It is so counter to the toxic masculinity and weakness that this president is showing, who says he has all the answers and never apologizes.

Joe Biden is showing this extraordinary strength and he is humbling himself to talk about the kinds of teams he wants to build, and how inclusive and diverse it will be. I really think he sees himself as a bridge to the next generation of American leaders, and for him to talk openly about a woman vice president, a black woman Supreme Court justice.

Do you think he needs to pick a black woman as his running mate?

I trust him. I know he will weigh all of the competing issues of the day to come up with a person that can help lead us in this tumultuous time, so I trust that he will make the right decision.

You have introduced multiple criminal justice bills in the last couple of years, like legalizing marijuana, reconsidering long sentences and supporting incarcerated women. What gives you hope that these bills can pass?

The bill that I have authored [on police misconduct] this past week — it would not have been possible to get the majorities of the Democrats in Congress on it a month ago. But because of the activism of millions of Americans, it moved the needle of the possible. Well, we have to move it a lot more.