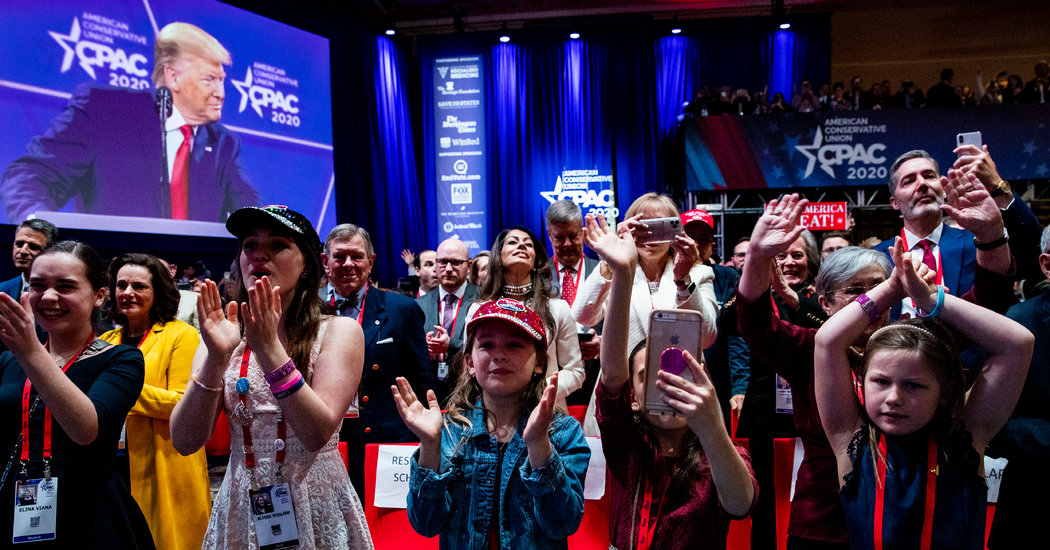 An attendee of a conservative conference where President Trump and Vice President Mike Pence spoke last week has tested positive for the coronavirus, according to the event’s organizer.

The organizer, the American Conservative Union, which hosts the annual Conservative Political Action Conference outside Washington, D.C., said the attendee was exposed to the virus before the four-day event and tested positive for it on Saturday.

“This attendee had no interaction with the president or the vice president and never attended the events in the main hall,” the group said in a statement. “The Trump administration is aware of the situation, and we will continue regular communication with all appropriate government officials.”

The attendee has been quarantined in New Jersey, the statement said.

Mr. Trump said on Saturday that he was not worried that the infections seemed to be getting closer to the White House.

“No, I’m not concerned at all, no,” he told reporters at his Mar-a-Lago estate in Florida, where he was spending the weekend.

He said he had no plans to curtail his campaign rallies even though other large gatherings of people were being canceled across the country.

“We’re going to have tremendous rallies,” he said.

Praising health officials for a “fantastic job,” he added, “We’ve had tremendous cooperation with other countries and all over the world and we’ve made it very, very tough, very strong, stringent borders.”

Stephanie Grisham, the White House press secretary, said in a statement that there was “no indication that either President Trump or Vice President Pence met with or were in close proximity to the attendee.”

“The president’s physician and United States Secret Service have been working closely with White House staff and various agencies to ensure every precaution is taken to keep the first family and the entire White House complex safe and healthy,” Ms. Grisham said.

Others who spoke at the conference included Secretary of State Mike Pompeo, Transportation Secretary Elaine Chao and Labor Secretary Eugene Scalia. Also in attendance were Jared Kushner, the president’s son-in-law and adviser, and Donald Trump Jr., the president’s eldest son.

Gov. Larry Hogan of Maryland said in a statement that state health officials were informed by the New Jersey Department of Health that the person who tested positive for the virus was in Maryland from Feb. 27 to March 1, attending the conference in National Harbor.

The statement said those who attended or worked at the conference “may be at some risk” for contracting the virus.

“Due to the scale of this conference, we are urging attendees who are experiencing flulike symptoms to immediately reach out to their health care provider,” Mr. Hogan said.

The group’s chairman, Matt Schlapp, said he had had “incidental interaction with the person,” and added, “I feel bad for my friend who is in the hospital.”

At the conference, Mr. Trump gave his administration good grades for its handling of the coronavirus outbreak, while his acting chief of staff at the time, Mick Mulvaney, said in a separate speech that journalists were hyping the coronavirus because “they think this will bring down the president.”

“The flu kills people,” he said. “This is not Ebola. It’s not SARS, it’s not MERS. It’s not a death sentence; it’s not the same as the Ebola crisis.”

Founded in 1974, CPAC was for years a major gathering where libertarians and establishment Republicans mingled with fringe conservative activists. This year, the theme of the conference was “America vs. Socialism,” and it turned into a stage for Mr. Trump and his top advisers and allies to fire up his base and market-test messages for the 2020 presidential election.

Republicans who have broken with the president and his agenda, like Senator Mitt Romney of Utah, were disinvited from the conference, and the mention of Mr. Romney’s name by one conservative speaker elicited boos from the audience.