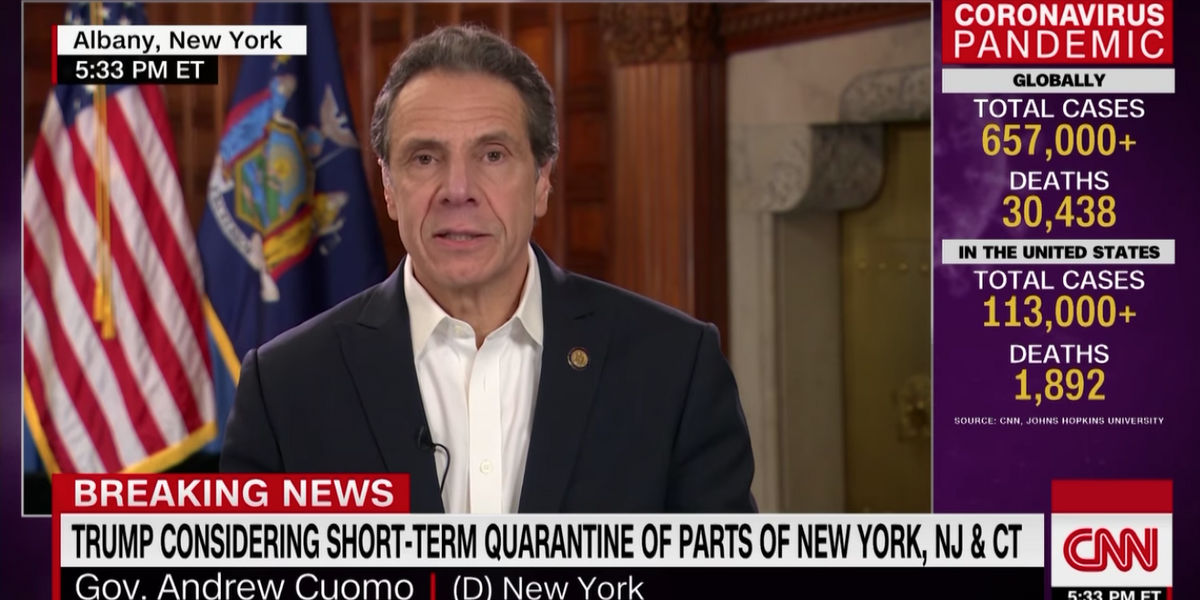 New York Gov. Andrew Cuomo (D) said on Saturday that if the federal government were to enforce a quarantine of his state and the surrounding region it would amount to a “federal declaration of war.”

Cuomo made the comments on CNN as President Donald Trump said earlier in the morning that he was considering a quarantine of “developing ‘hot spots,'” including New York, New Jersey, and Connecticut. The president said “a decision will be made, one way or another, shortly.”

The New York governor blasted the proposal as illegal.

“If you start walling off areas all across the country it would just be totally bizarre, counter-productive, anti-American, anti-social,” he said.

“It makes absolutely no sense and I don’t think any serious governmental personality or professional would support it,” he added.

Trump briefly addressed the possible quarantine before departing the White House to bid farewell to the USNS Comfort in Norfolk, Virginia.

“Some people would like to see New York quarantined because it’s a hotspot — New York, New Jersey maybe one or two other places, certain parts of Connecticut quarantined. I’m thinking about that right now,” the president said on Saturday morning.

Trump added the measure would be temporary. “We might not have to do it but there’s a possibility that sometime today we’ll do a quarantine – short term – two weeks for New York, probably New Jersey, certain parts of Connecticut,” he said

According to the Daily Mail, Trump is considering the possibility given that New York now has nearly half of the country’s 113,000 confirmed coronavirus cases. In New York City’s five boroughs, there are 29,766 known cases and 450 deaths related to the deadly outbreak.

However, Cuomo said the measure would be unwarranted.

“This is a civil war kind of discussion,” he said of the proposal while doubting that Trump was seriously considering it as an option. “I don’t believe that any administration could be serious about physical lockdowns of states.”

Several states have already imposed restrictions on travelers from New York. For instance, the governors of Rhode Island and Florida have declared a mandatory 14-day quarantine for any traveler from the Empire State. Additionally, state police officers have set-up checkpoints on I-95 in both states screening drivers with New York license plates.

“I want to be crystal clear about this: If you’re coming to Rhode Island from New York you are ordered into quarantine. The reason for that is because more than half of the cases of coronavirus in America are in New York,” Rhode Island Gov. Gina Raimondo said