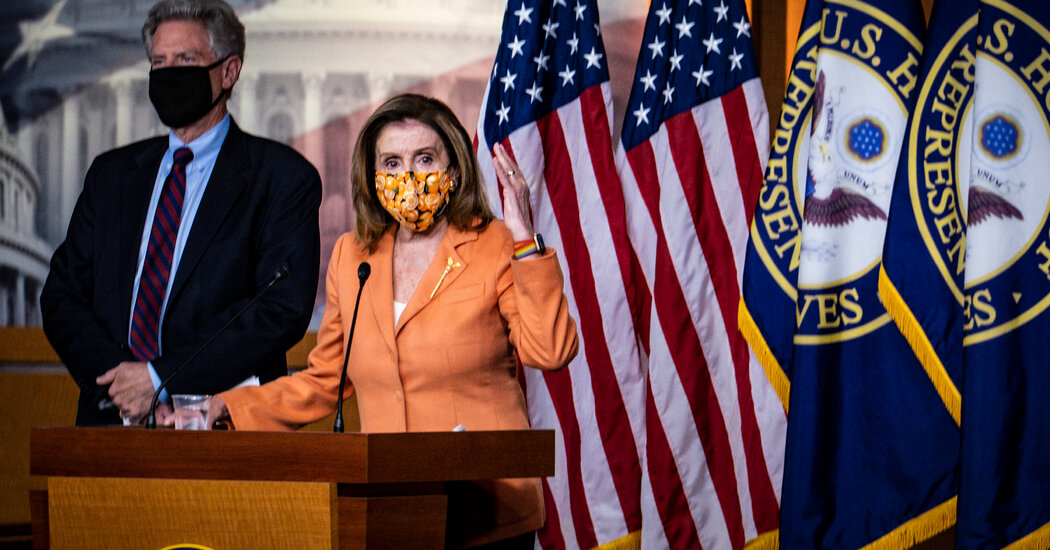 WASHINGTON — On Tuesday, the bipartisan stimulus talks were off, abruptly ended by a series of indignant tweets by President Trump. On Wednesday, there was a glimmer of hope when he suggested he might reconsider, and top negotiators haggled privately by phone over possible legislation.

By Thursday, the president performed a complete about-face and suggested that a deal could be at hand — then turned around and derided Speaker Nancy Pelosi of California, the top Democrat in the discussions, as “Crazy Nancy.” Ms. Pelosi, for her part, teased the announcement on Friday of legislation establishing a commission to advise Congress on whether the president should be forcibly removed from office for mental or physical impairments.

As tens of millions of Americans, schools and businesses watched the flurry of developments that could determine whether they would receive another infusion of desperately needed pandemic relief, confusion reigned in Washington about whether an elusive stimulus compromise was dead, alive, on life support or somewhere in between.

What remained clear was that the political stakes, which have long imperiled a bipartisan bargain, have only heightened. And the collateral damage across the country has continued to mount in the absence of federal funding, with more than 800,000 Americans filing new applications for state benefits, before adjusting for seasonal variations.

“The discussion from day to day can be confusing for all of us to follow,” Senator Mitch McConnell of Kentucky, the majority leader and the top Republican on Capitol Hill, told reporters at an event in Kentucky. “But we’re still engaging and hoping we can find a way forward.”

Days earlier, Mr. McConnell had privately suggested to the president that Ms. Pelosi was demanding too much in the talks and warned that her demands for a compromise would by definition be too costly for many Republicans to embrace. The Washington Post reported the conversation earlier.

A number of moderate Republicans in both chambers have criticized the end of negotiations and urged leaders to reach a compromise.

In separate appearances on Thursday, Mr. Trump and Ms. Pelosi insisted that talks were continuing, with the president suggesting that negotiators were now discussing $1,200 stimulus checks in addition to a potential aid measure for airlines to prevent tens of thousands of workers from being furloughed or laid off.

“I shut down talks two days ago because they weren’t working out — now they’re starting to work out,” Mr. Trump told Fox Business. Ms. Pelosi, he said, “wants it to happen, because it’s so good for our country, we really need it.”

The speaker, for her part, ruled out the prospect of voting on a stand-alone aid package for airlines without a commitment that the Trump administration would agree to a broader pandemic relief plan to help struggling Americans, declaring that “there is no stand-alone bill without a bigger bill.”

It was also unclear whether a stand-alone bill addressing the airline relief would secure enough support in either chamber to reach the president’s desk. Two Republican senators, Mike Lee of Utah and Patrick J. Toomey of Pennsylvania, raised concerns about the prospect of voting on such legislation without debate or “adequate protections for taxpayers.”

“No one wants to see layoffs, but we have a responsibility to ensure that taxpayer resources are used in an appropriate and equitable manner,” the senators said in a statement.

Behind the scenes, private talks between Ms. Pelosi, top Democrats and Treasury Secretary Steven Mnuchin continued to hold out the tantalizing prospect that an agreement could be reached. But the speaker, her position bolstered by the president publicly taking credit on Tuesday for torpedoing the talks, made it clear to the administration that any deal would be on her terms. She said she had told Mr. Mnuchin that her willingness to consider an airline rescue measure was contingent on the administration’s agreement to a broader stimulus plan.

With Mr. Trump largely disengaged from negotiations, Mr. Mnuchin, according to aides in both parties, has long been seen as increasingly eager to reach an agreement.

But Republicans, particularly in the Senate, are wary of how much Mr. Mnuchin has been willing to concede to Ms. Pelosi and Democrats in previous negotiations and what they have been forced to accept in coronavirus legislation. Mr. Trump’s decision to abruptly halt negotiations with a series of Twitter posts did little to bolster Mr. Mnuchin’s credibility, though Ms. Pelosi said the Treasury secretary claimed he had known in advance what the president was going to do.

“We’re happy to review what that stand-alone bill would look like, as part of a bigger bill, if there’s a bigger bill,” Ms. Pelosi said. “We’re at the table; we want to continue the conversation.”

“The Speaker trusts that the secretary speaks for the president,” Mr. Hammill tweeted.