For Donald Trump, it was the strangest and most news-making thing he could have done: instead of taking questions from journalists, dominating the nation’s airwaves yet again, the US president gave a short pre-written statement and then stalked off the stage.

Three months and 50,000 deaths: the defining Covid-19 moments in the US – timeline

The abrupt end of Friday night’s daily press conference, which has become a ribald, unruly and often shocking ritual in America during the coronavirus pandemic, was probably the clearest sign yet of how badly Trump’s bizarre statements over disinfectant have shaken his administration.

Instead of going on the offensive after the world reacted with shock and horror to his Thursday night suggestion that the coronavirus might be treated by injecting disinfectant into a human body, Trump claimed he was being “sarcastic” and then retreated from public view.

But it was Trump’s silence on Friday night that spoke volumes.

White House coronavirus taskforce briefings are often two-hour primetime marathons but on Friday Trump turned on his heel as reporters shouted questions in vain. Perhaps it was a fit of pique, or perhaps revenge on the reporters that he sees as persecutors. He may also have reached a tipping point with his own advisers warning that the televised briefings are hurting him far more than they help.

Right on cue, minutes later, the Axios website reported that Trump plans to “pare back” his coronavirus press conferences, according to four of its sources. Next week, it said, “he may stop appearing daily and make shorter appearances when he does”.

If he does that then Trump’s remarks over disinfectant will have been the straw that broke the camel’s back over the nightly ritual of the virus briefings. For weeks they have dominated the US headlines as the nation struggles to come to terms with a pandemic that has cost 50,000 American lives. They have provided a canvas for Trump’s rage, a platform from which he can attack his enemies and – only occasionally – a place where an American president can seek to reassure a scared and besieged public enduring stay-at-home orders to curb the virus.

But Trump’s remarks over disinfectant changed all that.

On Thursday, Trump had suggested that doctors study the idea of people receiving injections of disinfectant to combat the virus. He also extolled the potential and unproven benefits of ultraviolet light. Medical experts, politicians and even disinfectant makers denounced the suggestion and warned the public against consuming the product. Trump’s comments generated internet memes and headlines around the world.

His old nemesis from 2016, Hillary Clinton, chimed in with a quick jab on Twitter. “Please don’t poison yourself because Donald Trump thinks it could be a good idea,” she said. His new nemesis for the 2020 election, former vice-president Joe Biden, also pitched in. “I can’t believe I have to say this, but please don’t drink bleach,” he said, mixing mockery with a public service announcement.

From almost the moment the words left Trump’s mouth it was clear some sort of damage limitation was needed.

But, as shock and amazement traversed the globe, it was slow in coming. When it did arrive, on Friday lunchtime, it was a clean-up attempt that clearly could have gone better. At a White House event Trump tried on Friday to justify his dangerous comments, falsely claiming that he was “asking a question sarcastically to reporters”.

On Friday, even as the US death toll topped 50,000 and the grim milestone of 1 million coronavirus cases grows nearer, Trump tried to make what critics saw as a desperate and dishonest U-turn.

“I was asking a question sarcastically to reporters like you just to see what would happen,” the president, sitting at the Resolute desk in the Oval Office, told reporters as he signed emergency funding legislation.

But video of the briefings clearly demonstrated otherwise. There was no hint of sarcasm and Trump’s attempts to rewrite the immediate past were undermined by the evidence just a simple Google search away.

When Trump posed the question about the efficacy of disinfectant injections, he had turned to his right and was looking in the direction of Bill Bryan, the acting homeland security undersecretary for science and technology, and Deborah Birx, the coronavirus taskforce coordinator. 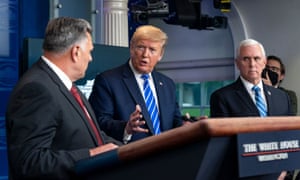 Donald Trump turns to the DHS official William Bryan during the briefing at which the president extolled the virtues of ingesting disinfectant. Photograph: White House/Zuma Wire/Rex/Shutterstock

But Trump – in his attempt at damage limitation – gamely pressed on. The Reuters reporter Jeff Mason asked if Trump wanted to clarify that he was being sarcastic and ensure no one misunderstood him.

He replied: “Yes. I do think that disinfectant on the hands could have a very good effect. Now, Bill is going back to check that in the laboratory. You know, it’s an amazing laboratory, by the way. It’s amazing the work they do.”

Trump: “No. Of course not. Interior-wise, it was said sarcastically. It was put in the form of a question to a group of extraordinarily hostile people, namely the fake news media.”

But Trump’s familiar turf of attacking the media was not working any more. In the middle of a pandemic, with Americans dying in their hundreds every day, the leader of the administration trying to guide the nation back to safety and normality had put even more lives at risk. His jumbled, inaccurate assertions only deepened concerns about Trump’s embrace of flawed science that could endanger public health.

Scott Gottlieb, Trump’s own former Food and Drug Administration director, was among those many people now forced to warn Americans not to follow their own president’s advice. He told a CNBC interviewer: “I think we need to speak very clearly. There’s no circumstance under which you should take a disinfectant or inject a disinfectant for the treatment of anything, and certainly not the treatment of coronavirus.”

The scandal exploded just a day after a New York Times report that detailed how Trump is coping with the pressures and isolation caused by the coronavirus pandemic. In a lengthy piece it portrayed a US president who has become cut off from many of his former friends and associates as he lives and works in the White House, unable to leave and travel and hold the campaign rallies that he appears to crave.

It portrayed a president who binges on cable news for many hours each morning and often late into the night, surveying the wreckage of a once-booming economy that he had planned on being the main plank of his re-election strategy.