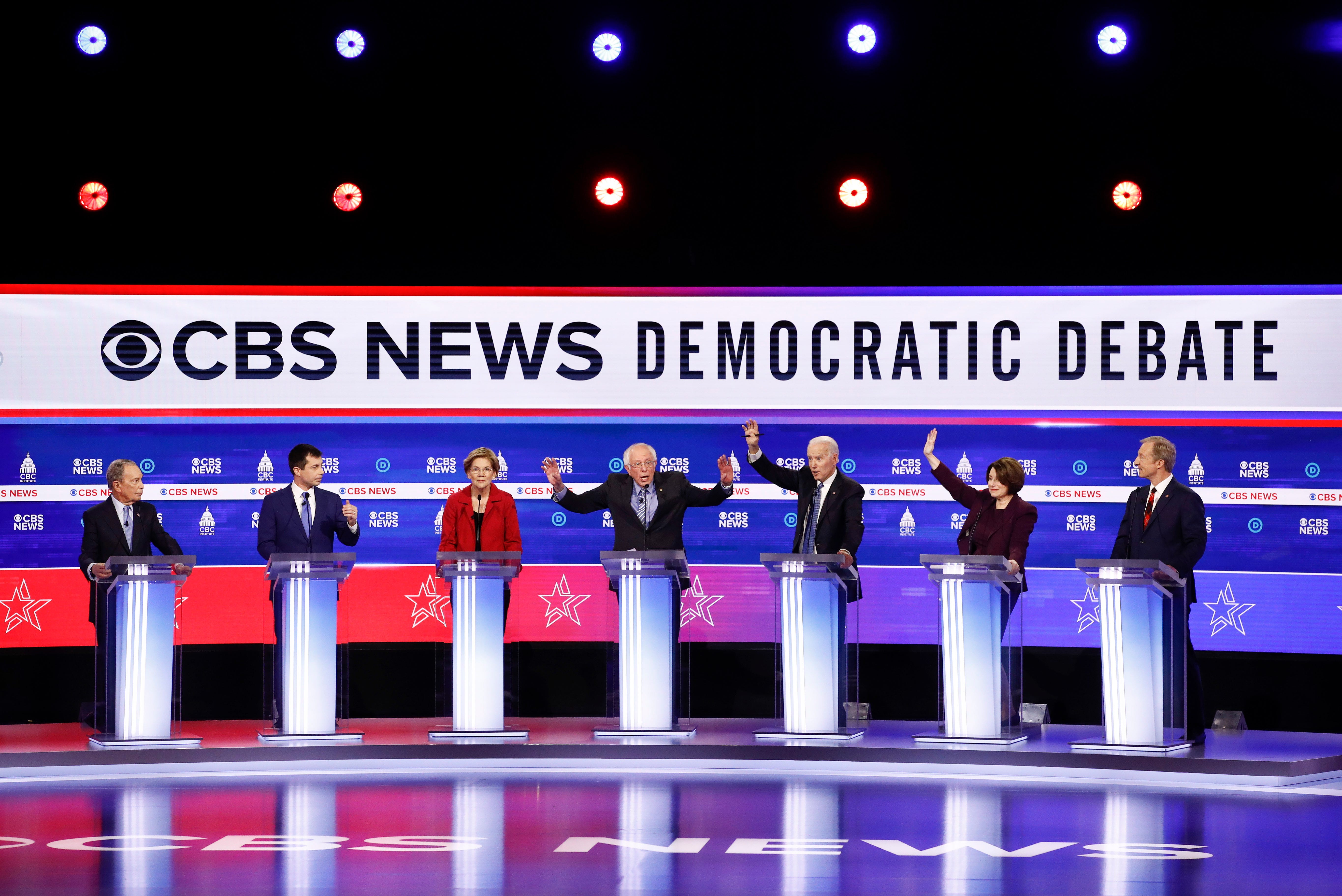 Jill: If last week was fight club, this week was food fight. The Democrats interrupted, cross-talked and attacked each other with such intensity that it seemed like 2016 again, with Donald Trump hurling insults and Carly Fiorina shaming the Republicans into letting her onto the debate stage. The best you can say about the Democrats’ shoutfest was that, unlike the Republicans four years ago, they stopped short of debating who has the biggest, ah, hands. The level of desperation in Charleston was palpable and regrettable, but understandable. The end game is near. This field will shrink after the South Carolina primary on Saturday and Super Tuesday three days later.

David: The Democrats of 2020 are replaying the Republicans’ disastrous 2016 dance with extremism. At least tonight, unlike previous debates, it looked like some of the candidates understood that Bernie Sanders was running away with the nomination. The desperation you detected came from the fact that this was their last chance to land some punches on the democratic socialist.

And now on to the grades:

David: B+. He’s finally awake, and his showing may have salvaged his position at the top of the heap in the South Carolina primary. If he put in this kind of performance consistently in the debates, there wouldn’t be any question who was the leading candidate to oppose Sanders.

Jill: B-. This was not the win he needed to reassure Democrats he is The One who will deliver them from Trump. Not that Biden didn’t have flashes of his trademark charming Biden moments — “Why am I stopping? No one else stops,” he said at one point after being told his time was up. But there was too much talk about the past, and too much digging in the weeds. It was smart to promise to put a black woman on the Supreme Court. But to argue with Amy Klobuchar about who was the true author of the “boyfriend loophole“? People, please. Remember the vision thing.

David: F. Wow, the guy sure isn’t spending his billions on debate prep. His answer on “stop and frisk” got marginally better, but he never seemed sure-footed. The most laughable moment of the night came when, in a clumsy attempt at self-deprecating humor, he claimed to be amazed that the other candidates showed up after he beat them so badly in the last debate. He must be smoking the weed that he wants to decriminalize.

Jill: C.This was a better debate for him, but the bar was low. It’s never good when you’re denying that you ever told a pregnant employee to “kill it” or evading questions about why you bankrolled Republican Senate races for people who hobbled the Obama presidency. Beyond that there were disturbing echoes of Trump’s “I alone can fix it” in Bloomberg’s insistence that ”I know what to do … I’m the one choice that makes some sense.” In fact, that’s not at all clear.

David: C. As the candidate running closest to Sanders in terms of delegates, the Indiana mayor had the most to gain tonight from a beat-on-Bernie pile-on. While he was as articulate as usual, I don’t think he capitalized on the opportunity. His best comment of the night was when he asked viewers to image how awful the rest of 2020 will be if it is a battle between Bernie Sanders’ 1960s radicalism and Donald Trump’s 1950s nostalgia. That’s my nightmare.

Jill: B+. For me Buttigieg’s best moment was when he talked about getting rid of the filibuster that requires a 60-vote supermajority to pass anything in the Senate. He tweaked Sanders for not being on board with that idea (“How are we going to deliver a revolution if you won’t even support a rule change?”) and noted, doubtless for the benefit of South Carolina’s majority black primary electorate, that the late Sen. Strom Thurmond had used the filibuster to block civil rights bills. His political smarts are always showing. That bothers some people. Not me.

David: B. She was really settled in. Her weird vibration and shaky voice were gone, and she made the most compelling case yet for her measured, middle-of-the-road approach to progressive politics.

Jill: C. She was missing from the first 17 minutes of the debate, which is way too long. When she got into the game, we heard a lot about her bills and her bills and her bills. This did not support her assertion that the biggest misconception about her is that she’s boring — “because I’m not.” Hmm. Passing bills is great. Living by the late Sen. Paul Wellstone’s motto that “politics is about improving people’s lives” is great. But the presidency is also about inspiration. See above, vision thing.

David: B+. He knew the knives were out for him tonight, and he was mostly his usual unflappable socialist self. The only time he seemed to give way was when the moderators and his Democratic competitors were all going after him over the cost of his plans. It seemed like he said that Medicare for All would only cost $45 billion. Surely that must have been a slip of the tongue as no one is that disconnected from reality.

Jill: B. His rivals finally gave him the full-on frontrunner treatment, and he responded in high decibel “get off my lawn” mode. But his bluntness can be appealing. Asked why he let the gun industry off the hook in a vote back when, he replied, “That was a bad vote.” He is right that health care for all is not a radical idea, but his Medicare for All plan is a different story and won’t be a winner in swing states and districts. Sanders rattled off all the poll numbers that show he can beat Trump, but a President Sanders with a GOP House and Senate would be no triumph.

Mastio & Lawrence:Grading Bloomberg, Sanders and other Democrats at the Las Vegas debate

David: W (for Who?) Did any of the other candidates engage with him or even act like he was there? South Carolina is his last chance to matter, and then it looks like he will be among the first to go.

Jill: C. Let’s stipulate that, like Bloomberg, Steyer has used a ton of his money for good on subjects near and dear to Democrats, from registering voters to agitating for impeachment to pressing for action on climate change. That doesn’t mean he should be president, or even on a debate stage.

David: C+. She was solid, but seemed like she was still in the last debate attacking newcomer Mikl Bloomberg. Weirdly, she seemed unaware that the former New York mayor had released three women from their non-disclosure agreements just as she had demanded in the last debate. Citing the words of Jesus as her motto was a nice touch.

Jill: A-. I’m coming around on her. She was the first to mention getting rid of the legislative filibuster and I cheered out loud. That is how she intends to accomplish what needs to be done, and it seems more realistic than Bloomberg’s notion that he’s a rich business guy so he will just … somehow … get it done. That’s his slogan and she deployed it against both him and Sanders (painting him as someone who doesn’t dig in and do the work to get things done). “For me, this is about how we treat other people and how we lift them up,” she said in closing. It was a rare and welcome departure from attack mode.