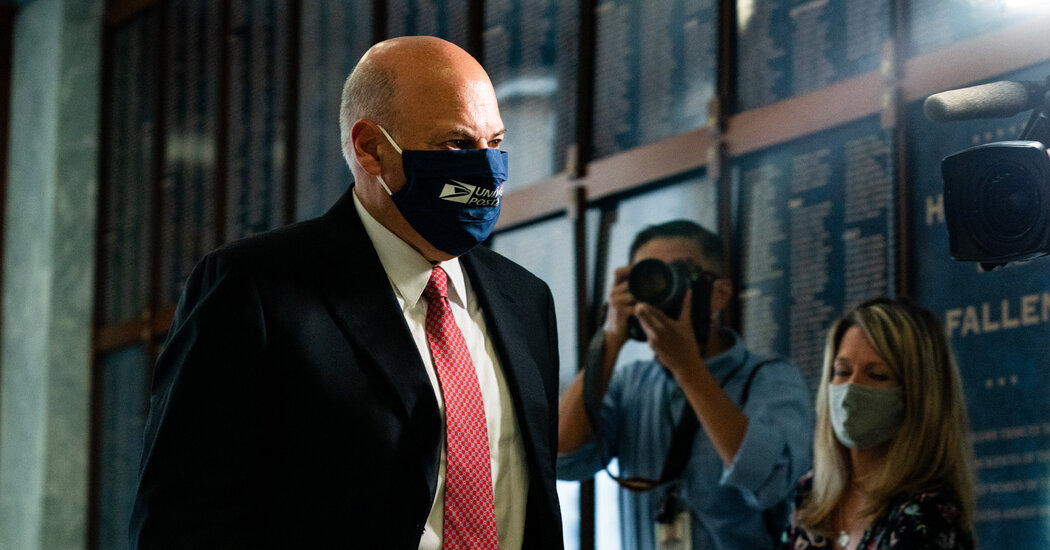 Postmaster General Louis DeJoy, a major donor to President Trump and fund-raiser for the Republican Party, cultivated an environment at his former company that left employees feeling pressured to make donations to Republican candidates, and rewarded them with bonuses for doing so, according to former employees.

The arrangement was described by three former employees at New Breed Logistics, Mr. DeJoy’s former company, who said that workers would receive bonuses if they donated to candidates he supported, and that it was expected that managers would participate. A fourth employee confirmed that managers at the company were routinely solicited to make donations. The four former employees spoke on the condition of anonymity for fear of professional retaliation.

The former employees did not say how explicit Mr. DeJoy was about linking the campaign contributions he was encouraging to the extra compensation, but three of them said it was widely believed that the bonuses were meant to reimburse the political donations, an allegation first reported by The Washington Post. Federal campaign finance law bars straw-donor schemes, in which an individual reimburses someone else to donate to a political campaign in order to skirt contribution limits. But it is legal to encourage employees to make donations, as Mr. DeJoy routinely did.

A review of campaign finance records shows that over a dozen management-level employees at New Breed would routinely donate to the same candidate on the same day, often writing checks for an identical amount of money. One day in October 2014, for example, 20 midlevel and senior officials at the company donated a total of $37,600 to the campaign of Senator Thom Tillis, Republican of North Carolina, who was running to unseat a Democratic incumbent. Each official wrote a check for either $2,600, the maximum allowable donation, or $1,000.

Similar patterns of donations — including to the Republican National Committee and every Republican presidential nominee from President George W. Bush to Mitt Romney — stretch back to 2003, campaign finance records show. Mr. DeJoy’s wife, Dr. Aldona Wos, was the vice chairwoman of Mr. Bush’s North Carolina fund-raising team, and Mr. Bush later appointed her to serve as the ambassador to Estonia. Mr. DeJoy, a Republican megadonor, served as the chief executive of New Breed from 1983 to 2014, until the company was sold to XPO Logistics.

Monty Hagler, a spokesman for Mr. DeJoy, said in a lengthy statement provided to The New York Times that the former New Breed executive “consistently provided family members and employees with various volunteer opportunities to get involved in activities that a family member or employee might feel was important or enjoyable to that individual.”

Mr. DeJoy “was never notified” of any pressure they might have felt to make a political contribution, Mr. Hagler said, and “regrets if any employee felt uncomfortable for any reason.”

Mr. Hagler added that Mr. DeJoy had consulted with the former general counsel of the Federal Election Commission on election laws “to ensure that he, New Breed Logistics and any person affiliated with New Breed fully complied with any and all laws.”

At a hearing last month, Mr. DeJoy angrily denied a suggestion by Representative Jim Cooper, Democrat of Tennessee, that he had reimbursed his employees’ political donations.

“That’s an outrageous claim, sir, and I resent it,” Mr. DeJoy responded. “What are you accusing me of?”

It is unclear how the arrangement was communicated to employees or how extensive it was. One former New Breed employee said he donated to a Republican candidate and never received a bonus, prompting him to never again make another donation. Two other employees, Dave Bell, a current vice president at XPO Logistics who started as a vice president at New Breed in 2010, and Edi Dirkes, a human resources manager at the company from 2007 to 2010, said they had never heard of the arrangement.

“No one ever approached me” to make any political contributions, Mr. Bell said in a brief interview.

Still, the revelations are likely to fuel further scrutiny of Mr. DeJoy, who is under fire for his continuing financial ties to a company that does business with the Postal Service and his previous work fund-raising for Republicans.

Josh Stein, North Carolina’s attorney general, said in a statement that “it is against the law to directly or indirectly reimburse someone for a political contribution” and that “any credible allegations of such actions merit investigation by the appropriate state and federal authorities.”

Scrutiny of Mr. DeJoy began shortly after he took the helm of the Postal Service in June and began carrying out a series of cost-cutting steps that have led to slower and less reliable delivery as Mr. Trump has stepped up his attacks on voting by mail before the election in November.

Mr. Trump has assailed the money-losing Postal Service in recent months while falsely warning that voting by mail will lead to fraud and lost or stolen ballots. He has also cautioned that the practice could lead to long delays in determining a winner.

Mr. DeJoy has characterized those comments as “not helpful” and condemned the “false narrative” that he said was being promoted about both his intentions and the changes at the agency, which he has argued are necessary to shore up its financial health.

“I am not engaged in sabotaging the election,” Mr. DeJoy told lawmakers last month, noting that he had committed to reversing many of the changes that have drawn the sharpest backlash.