WASHINGTON — As coronavirus cases surge around the country and epidemiologists urge caution, the federal government is heading back to work, jeopardizing pandemic progress in one of the few regions where confirmed infections continue to decline: the nation’s capital.

At the Energy Department’s headquarters, 20 percent of employees — possibly as many as 600 — have been authorized to return on a full- or part-time basis. The Interior Department said in a statement last month that it anticipated about 1,000 workers to soon return daily to its main office near the White House.

The Defense Department has authorized up to 80 percent of its work force to return to office spaces, which could result in as many as 18,000 employees inside the Pentagon building, according to a spokeswoman. Many of them are already there.

Private-sector employers remain hesitant to put workers back in their seats. Restaurant and bar owners around the country are shutting their doors anew. But agency chiefs at the nation’s largest employer, the 2.1 million-strong federal government, are taking their cues from an impatient President Trump and summoning employees to their desks.

“Federal employees have been working throughout the entire pandemic,” said Everett Kelley, the national president of the American Federation of Government Employees, the largest union representing federal workers in the District of Columbia. “To move them to a work site so the administration can say they reopened the government is irresponsible.”

And many private employers in the region, like Capital One, have closed their offices to nonessential workers until at least Labor Day.

But federal back-to-work orders are not changing. And that has local epidemiologists worried.

“You don’t want to negate all of the hard work that the D.C., Maryland, Virginia regions have done to reduce the number of cases of coronavirus in our region, by then returning everyone to work and potentially reversing the trends,” said Amanda Castel, an epidemiology professor at George Washington University.

Several agencies are still encouraging some telework while pressing supervisors and managers to identify employees to bring back to offices immediately.

The Energy Department began that process last week. According to a back-to-work order obtained by The New York Times, employees asked to report to the department’s offices will be questioned about flulike symptoms or contacts with coronavirus patients. The document did not say whether workers would undergo temperature screenings. It did say that while masks would be provided, employees would be encouraged, but not required, to wear them.

Employees with reservations but without heightened risk factors such as age or pre-existing conditions would still be required to return. Those tapped to come in could be given as little as a week’s notice to prepare. 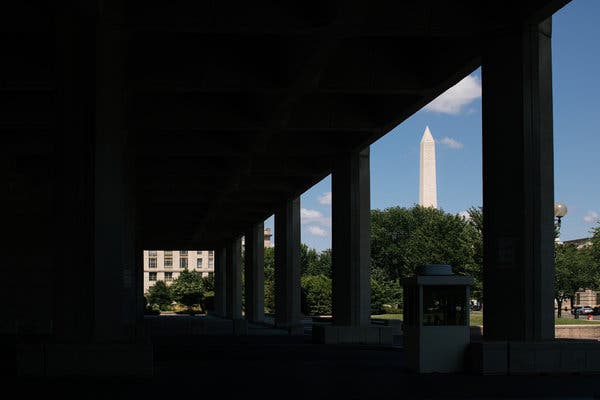 The Energy Department’s headquarters in Washington, where more than 2,000 employees have been authorized to come back on a full- or part-time basis.Credit…Alyssa Schukar for The New York Times

Beyond the Interior Department’s Washington headquarters, which are stirring back to life, department leaders said its “bureaus and offices should begin bringing employees back to office spaces to better satisfy operational needs,” according to agency work orders.

The department said it was working to provide face coverings but stopped short of requiring them. Employees were asked to voluntarily observe signs stating new occupancy limits in certain rooms and urged to wear masks in crowded spaces where social distancing could not be maintained.

“I think employees simply feel like the agency doesn’t care about them personally,” Mr. Reardon said. “It is taking a morale that was already low in the federal workplace and driving it even lower.”

In returning to normal operations, most federal agencies have chosen to follow the three-phase reopening plan for employers laid out under the Trump administration’s “Opening Up America Again” guidelines. The recommendations provide few details relative to those adopted by many states, which announced a four-phased approach with more surgical regulations for different business sectors resuming daily operations.

The White House plan advises employers to begin reopening in areas where coronavirus cases have fallen for 14 days and where hospitals have not been overwhelmed. In the Washington region, only the District of Columbia can claim continued progress.

“When you have an outbreak in one part of the country, even though in other parts of the country they are doing well, they are vulnerable,” Dr. Fauci told a Senate committee last Tuesday.

But the government appears undeterred. The Defense Department, which moved to a Phase 2 plan on June 29, could have up to 18,000 employees in their Pentagon seats, according to a spokeswoman. The department’s re-entry guide states that random temperature screenings will be given at entrances, all workers must wear a cloth face covering inside the Pentagon, and gatherings must be limited to 50 people or fewer.

In planning for workers to return, agencies are navigating sometimes conflicting guidance from the White House, the Centers for Disease Control and Prevention, the Office of Personnel Management and state and city leaders. The result is a patchwork of plans.

The Department of Homeland Security, for example, is still stressing telework; the United States Citizenship and Immigration Services has given employees the option to extend work from home as late as September.

“This is the fallout of not having a countrywide plan for how to go about this and having certain standards that everyone has to meet and adhere to,” Professor Castel said.

Many federal agencies operate field offices, bases and satellite centers across states and territories, forcing them to manage reopening in regions with widely differing conditions.

The State Department moved forward in June with Phase 1 guidelines, in part to resume passport processing in some offices outside Washington. But four of its foreign posts had already fully reopened. The department declined to say which missions were fully operational.

Dr. Anthony S. Fauci, the government’s top infectious diseases expert, warned that increasing cases across the South and West threatened other regions that were still relatively secure.Credit…Michael A. McCoy for The New York Times

For other agencies such as the Department of Veterans Affairs, which operates health centers and offices across all 50 states, a unified reopening strategy is all but impossible.

“A central planning solution for resuming regular operations makes no sense here because some areas of the country will take longer to recover, while other areas have seen minimal cases,” Robert L. Wilkie, the secretary of veterans affairs, said in a statement in May. “That’s why we’re letting local conditions dictate our next steps.”

Spokesmen for several agencies said they were closely monitoring the different postures taken by Virginia and Maryland, from which many federal employees commute.

On Wednesday, Virginia entered the final phase of its reopening plan, even allowing gatherings of up to 250 people. But a spokeswoman for the governor said the state “continues to strongly encourage office workers to telework.”

“We think this rush to reopen is very hazardous,” said Mr. Kelley, the union president. “Employees’ health should be the No. 1 priority of the agencies, not scoring political points for rushing employees back.”

Concerns about the risks facing federal employees have been brewing for months. On April 27, Democrats on the Senate governmental affairs committee sent a letter to the Office of Personnel Management, saying the office had not given federal employees clear advice on how and when to return to office work.

That is still true.

Environmental Protection Agency officials said their reopening plans were devised by local officials in each state, and all E.P.A. facilities and will be evaluated weekly by agency scientists using C.D.C. data. As of last week, the Washington office was still in Phase 1, and the agency’s New York-based office began the process of reopening on June 30.

But federal workers noted that since each phase lasts only 14 days, the third and final phase in which the agency will expect employees to return to their offices could occur in August if downward trends continue.

The inspector general for the E.P.A. announced on Wednesday an investigation into how the agency was carrying out the Trump administration’s reopening plan and the measures it had taken to protect employees.

“Without a vaccine, there are still a lot of scared employees,” Mr. Tseng said. “It’s making us feel like we are lab rats.”