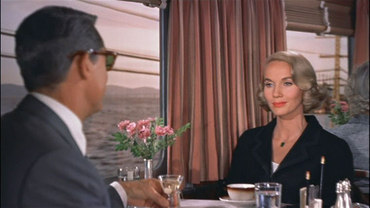 This year marks the 60th anniversary of the release of North by Northwest. Here’s what Mark had to say about this classic film a few years ago:

Alfred Hitchcock’s North by Northwest contains what I think of as the all-time great strangers-on-a-train scene, and one I always recall if I’m in the dining car of an at least potentially exotic choo-choo – the Eurostar, say – and a glamorous femme comes sashaying down the aisle, even if she does park herself at some other guy’s table. In a lifetime’s travel, everyone should have a North by Northwest moment: on a famous train, the Twentieth Century Limited to Chicago, Cary Grant walks into a crowded dining car and is seated opposite Eva Marie Saint, the coolest of cool blondes. The conversation starts out quietly smouldering and heats up from there:

He: The moment I meet an attractive woman, I have to start pretending I have no desire to make love to her.

She: What makes you think you have to conceal it?

He: Is that a proposition?

She: I never discuss love on an empty stomach.

She: But you haven’t…

It’s not just a pick-up scene. Grant is on the lam, wanted for a murder he didn’t commit, with his face splashed across the front page of every newspaper and disguising himself only with a pair of sunglasses that do not seem entirely natural on an evening train. So the scene doesn’t only sizzle, it also has an underlying tension. Miss Saint is a classic Hitchcock blonde; it’s not just the hair color, she seems blonde all over – eyes, cheeks, lips – and the playful unhurried evenly modulated voice with all the time in the world is the sort of thing you’d love to stick around for, if only the train hadn’t pulled to a halt in the middle of nowhere so that a carload of cops could climb aboard.

The man who wrote those words was Ernest Lehman, who was born on December 8th 1915 in New York. Eva Marie Saint was supposed to say “I never make love on an empty stomach”, which gives the “You’ve already eaten”/”But you haven’t…” exchange a sly visual image — the literal inversion of Larry Hart’s original lyric in “Bewitched, Bothered And Bewildered”:

Which the censors changed to “He can laugh”. Lehman’s particular censor insisted “make love” be changed to “discuss love”, which he thought ridiculous, even in 1959, but in no way diminishes the incendiary power of the scene. He set out to make “the Hitchcock picture to end all Hitchcock pictures”, and he succeeded.

The only screenwriter ever to be awarded an honorary Oscar, in the 2001 Academy Awards, Lehman in his acceptance speech urged movie critics to “bear in mind that a film production begins and ends with a screenplay”. Just so. If William Goldman is more frequently posited as the archetypal consummate screenwriter, Goldman himself in his most recent book on the trade acknowledges Lehman as the ultimate movie pro, an author so versatile there’s no signature or style other than superb skill across all the genres: of his big films, North by Northwest (1959) is a brilliant original screenplay; The Sweet Smell of Success (1957) an unforgettable shot of pure vitriol drawn from his own short story; The Sound of Music (1965) an efficient adaptation so spectacularly successful it came to dwarf the original stage version; and Who’s Afraid of Virginia Woolf? (1966) is a fabulous one-off in which Lehman demonstrated that his skills of adaptation could be applied just as effectively to new dramatists such as Edward Albee as to Rodgers and Hammerstein. He was the Hollywood musical’s last screenwriter (The King and I, West Side Story, Hello, Dolly!) and Philip Roth’s first (Portnoy’s Complaint). He did the glossiest romantic soufflés (Sabrina, with Humphrey Bogart and Audrey Hepburn) and a dark terrorist thriller (Black Sunday by Thomas Harris in pre-Silence of the Lambs days).

Lehman had his off-days. There’s one small change he made to The Sound of Music that always irks me: in the stage version, Hans the postboy — the guy who’s 17 going on 18 — is a loyal and enthusiastic Nazi but, at the crucial moment, he misleads the party bigshots and thus permits the Trapp family to escape; in the film version, the Trapps escape because the nuns swipe the spark plugs from the Nazis’ car. The first version is the classic Hammersteinian theme that everyone is capable of redemption, or at least doing what’s right in the moment, and it underlines that, whatever their political differences, in the end Hans has lived up to the love he claimed in his song; the second is just cute nun shtick. It’s a tiny shift that makes it a little easier to despise The Sound of Music – as many of Lehman’s friends did. As Burt Lancaster sneered, running into him in the commissary, “Jesus, you must really need the money.” Not after two-and-a-half per cent of the profit he didn’t.

Lancaster starred in Lehman’s The Sweet Smell of Success as the big, bespectacled, beetle-browed bully of a columnist JJ Hunsecker. It’s a marvelously physical performance, along with that of Tony Curtis as the craven, oleaginous press agent hanging at his elbow. But it’s the slightly stylized heightened dialogue Lehman provides that raises the film to the heights – as in Lancaster’s request for a light from and simultaneous taunt to Curtis: “Match me, Sidney.” To a senator’s query – “Why is it that everything you say sounds like a threat?” – Hunsecker replies that it’s merely a “mannerism”, and that’s the film’s arc: a mannered menace that curdles into the real thing. When Lehman co-produced a Broadway musical of the picture in 2002, he allowed himself to go along with shifts that softened and sentimentalized the characters and betrayed the film’s hard mean edge.

Still, he was pushing 87 by then and any work was better than what most writers are doing at that age. After his first wife died, he married his second in 1997 after meeting her in an “online” “chatroom” (two words he never had to use with Cary Grant and Eva Marie Saint) and telling her, “I like distant intimacy.” That’s a classic Lehman line — indeed, it sums up Miss Saint’s pitch in North by Northwest. After all, even as they’re kissing, what do she and Cary Grant know about each other?

She: This is ridiculous. You know that, don’t you?

She: I mean, we’ve hardly met.

She: How do I know you aren’t a murderer?

She: Maybe you’re planning to murder me right here, tonight.

Compare that with the plonking boilerplate accompanying the special effects at the multiplex this Christmas. Lehman was right: every great movie begins and ends with a screenplay.