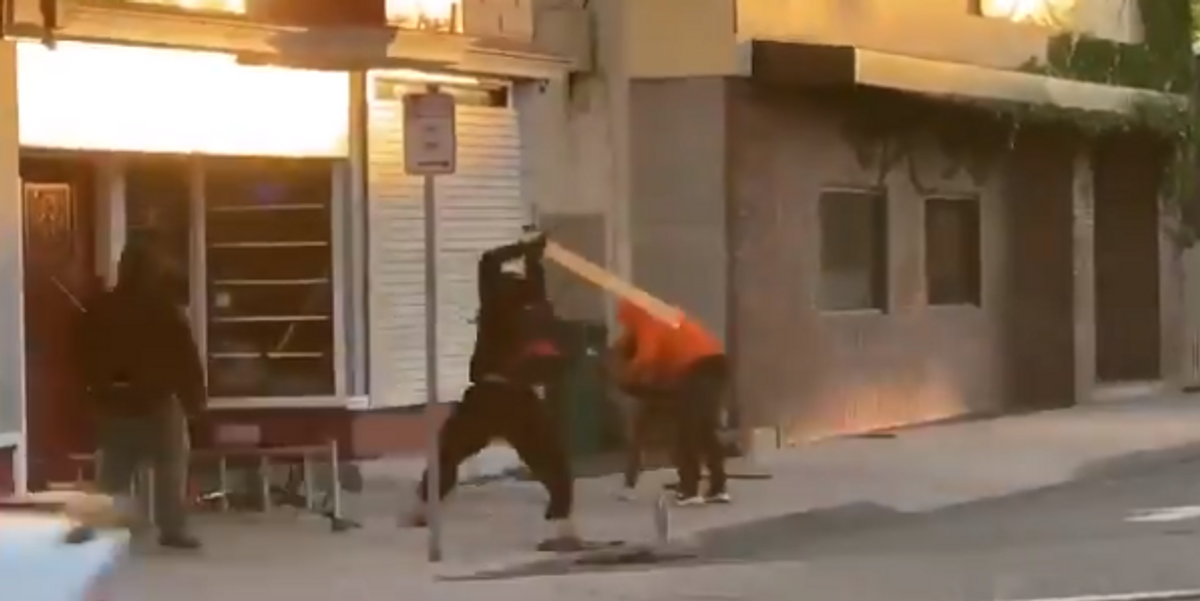 A graphic and disturbing video shows a group of men attacking a husband and wife after the couple attempted to stop the rioters from looting a business in Rochester, New York.

There were widespread looting and rioting in downtown Rochester Saturday evening, according to WHAM-TV. The Villa, a sportswear and sneaker store in Rochester, was one of the businesses looted on Saturday.

At the Rochester Fire Equipment Company, a group of men smashed the glass exterior, and were about to loot the jewelry store next door. The men were using 2x4s and a metal ladder to break the glass.

A woman told the men to stop destroying the business, and instead of dispersing, one of the men started punching the woman in the face. The woman covered her head as the rioter continued to pummel her.

The husband of the woman heard the commotion and came out of the store. The group then started hitting the husband and wife with the 2x4s. The husband used a golf club to attempt to fight off the men who were attacking his wife. The husband is struck several times with the 2x4s and screams in agony as he retreats back to the store.

Meanwhile, one of the attackers threw the woman head-first into a metal window covering. The husband returns and screams, “Get away from my wife!” The assailants then swing the 2x4s at the husband again.

The video ends abruptly as the husband and wife are still being assaulted.

Joe Painter, who took the video, said he was out grocery shopping when he saw the shocking scene. Painter, who says he is a veteran of the War in Afghanistan, told WHAM that the merciless beat-down was “one of the worst things he’s ever witnessed.”

Painter said he stopped recording because some of the attackers started running towards him.

As of Sunday morning, the woman is reportedly recovering.

There was another horrifying video from Saturday’s riots where over a dozen rioters brutally beat and stomped a man in Dallas so violently that he fell unconscious.

News DSMW - October 19, 2021
0
Scientists from the Department of Nuclear Medicine and Tracer Kinetics at Osaka University developed a novel system for targeted cancer radiation therapy that uses gold nanoparticles labeled with astatine-211. Owing to the limited range and half-life of the radiation, along with the localization of the nanoparticles, healthy cells are considerably less...

Commentary Mark Steyn - October 19, 2021
0
Welcome to our regularly scheduled audio Ovaltine twenty minutes before you lower your lamp: it's Episode Sixteen of our autumnal diversion by Jane Austen, Northanger Abbey. Thank you for your kind words about this and other SteynOnline features. ...
MORE STORIES