No one has tagged a rival with a bully-boy nickname like “Sleepy” or “Liddle.”

But as push comes to shove in the Democratic primary, candidates and their surrogates have descended to a level of personal animus that was rare before the era of President Trump.

After Pete Buttigieg attacked Mr. Sanders’s victory in Nevada, Mayor Bill de Blasio of New York lectured Mr. Buttigieg on Twitter, saying “not to be so smug when you just got your ass kicked.”

And lest last week’s Democratic debate recede into history (it was just five days ago), one memorable and searing moment was a highly personal exchange in which Mr. Buttigieg and Amy Klobuchar dripped contempt for each other, with Ms. Klobuchar saying, “I wish everyone was as perfect as you, Pete.”

As the primary race becomes a battle of all against all, “Hunger Games”-style, and the field suddenly seems to be constricting, the divisiveness and negative attacks are rising. Mr. Sanders’s commanding win in Nevada — he earned 24 pledged delegates as the final results were tallied Monday, with Mr. Biden taking nine and Mr. Buttigieg, three — has triggered alarm among some center-left Democratic officials and voters. His moderate challengers have sought in vain to push one another to the exits to consolidate the anti-Sanders vote. 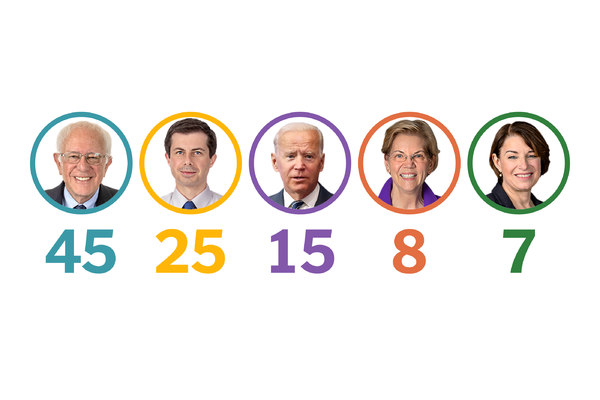 Past presidential primaries certainly had their share of negative campaigning. But much of the intraparty warfare used to be waged behind the scenes — through “oppo dumps” of compromising research against opponents or anonymous criticism in newspaper stories. Today the combination of social media democratization and Mr. Trump’s habit of lobbing nasty personal attacks have removed the filters.

“Candidates always tried to stay above it and never get down deeply in the mud,” said Joe Lockhart, a former press secretary for former President Bill Clinton. “Trump has changed that. He’s modeled the idea that the presidential candidates are the ones to make the sharpest attacks, and there’s no bottom.”

On Saturday night, after Mr. de Blasio, a surrogate for Mr. Sanders, tweeted at Mr. Buttigieg, saying “Dude, show some humility,” Mr. Lockhart immediately replied to the New York mayor, “Who cares what you think?”

Four or five years ago, Mr. Lockhart said in an interview, he would have had to phone a reporter to weigh in, and the mainstream press, acting as gatekeeper, might or might not have quoted him.

Now, “there’s the ability for people to have their own platforms,” he said. “I tweeted it, and got back to my dinner.”

David Pepper, chairman of the Ohio Democratic Party, lamented that the last debate, which smashed records as the most watched Democratic presidential debate ever, was so intensely negative. “My worry is that everyone looked so mad at each other,” he said. “When every person on the stage has their oppo ready to go and delivers it with such ferocity, you may win that individual skirmish, but you’re giving away the bigger picture — the need for people to be inspired.”

Yes, there are many examples of Democratic rivals turning negative in past primary races. Strategists for Hillary Clinton in 2008 dangled Mr. Obama’s youthful drug use. In 2016, Mrs. Clinton accused Mr. Sanders of smearing her for receiving donations from rich people.

But those digs feel pretty innocent compared to this year, when a burst of gloves-off negativity seems to have been triggered by the prospect of a staunchly leftist nominee in Mr. Sanders, the late entry of Michael R. Bloomberg and a fierce fight over which moderate candidate ought to be Mr. Sanders’s leading foil.

With seven Democrats set to appear in another presidential debate on Tuesday in South Carolina, the negativity is unlikely to let up. Mr. Buttigieg previewed that he would continue to try to undermine Mr. Sanders as a high-risk choice. On Monday, he tweeted that after Mr. Sanders’s “60 Minutes” interview, it would be disastrous to nominate the self-described democratic socialist “after four years of looking on in horror as Trump cozied up to dictators.”

On election night in Nevada, Mr. Buttigieg, who has been the most aggressive in taking on Mr. Sanders, said his rival “believes in an inflexible, ideological revolution that leaves out most Democrats, not to mention most Americans.”

Mr. Bloomberg, the former New York mayor, is also highly likely to be a broad target again. At the debate last week, Elizabeth Warren pushed Mr. Bloomberg hard over derogatory comments he had made about women, and his settlements with former employees that kept some women from discussing such incidents. The blowback led Mr. Bloomberg later to release three women from nondisclosure agreements.

Not everyone is unhappy about a fierce primary fight.

Former Gov. Terry McAuliffe of Virginia said it was entirely reasonable that candidates were probing one another’s vulnerabilities. “Senator Sanders, the current front-runner, has not faced true sustained scrutiny in either of his runs for president,” Mr. McAuliffe said. “So it’s much better to understand his electability now in the primary than to not know until he’s facing Donald Trump’s smear machine.”

And Jesse Ferguson, a Democratic strategist, was glad for the new tenor of the primary. It reveals who has the steel for the coming showdown of the general election, he said.

“It’s one thing to tell people about your agenda, it’s another to show people how hard you’ll fight for it, but that’s what candidates are starting to do, and it’s about time,” said Mr. Ferguson, who worked for Mrs. Clinton in 2016.

“Democrats want a nominee who will be the general to lead us into battle against Donald Trump,” he continued. “They’re not going to promote someone to that role unless they’ve proven they can win a few skirmishes first.”