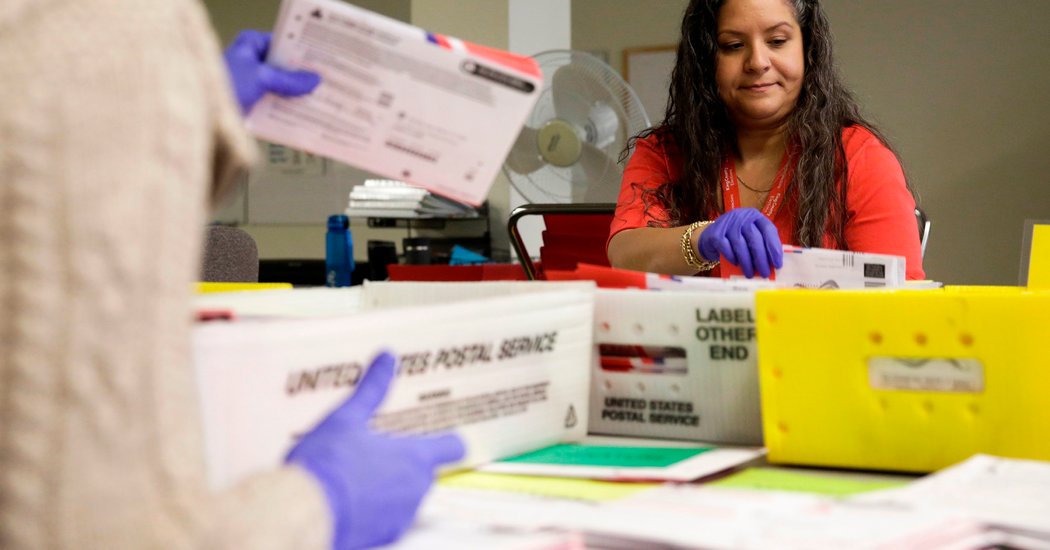 President Trump said that if the United States switched to all-mail voting, “you’d never have a Republican elected in this country again.”

The G.O.P. speaker of the House in Georgia said an all-mail election would be “extremely devastating to Republicans.”

Representative Thomas Massie, a Kentucky Republican, said universal mail voting would be “the end of our republic as we know it.”

Yet leading experts who have studied voting by mail say none of that is true.

As with false claims by Republicans about vote-by-mail fraud, there is no evidence to back up the argument from the right that all-mail elections favor Democrats. But Mr. Trump and some of his allies are warning that vote-by-mail poses an existential threat to their party, in hopes of galvanizing Republican opposition to a voting method that is widely seen as safer than in-person voting in the era of the coronavirus.

Five states — Colorado, Hawaii, Oregon, Utah and Washington — now have all-mail elections, in which ballots are sent to every registered voter without their having to request one. Others, like Arizona and California, allow voters to add themselves to a permanent list of mail voters.

And there are also cases like Nebraska, which allows counties of less than 10,000 people to mail ballots to all voters (many of them Republicans) but forbids it in large urban areas (where many voters are Democrats). Texas allows no-excuse absentee voting for people 65 or older, another group that skews Republican.

None of these states have seen an appreciable shift favoring Democrats that officials and experts attribute to mail voting. Here are a few reasons.

What happens to partisan turnout after a switch to mail voting?

Not much that hadn’t happened before.

The main argument by Mr. Trump and other Republicans is threefold: Voting by mail is easier than going to the polls; more people will vote if the process is easier; and when larger numbers of people vote, more will vote for Democrats.

But in the states and counties that have transitioned to all-mail voting, there has been little evidence of partisan advantage for either side because of mail voting, said Robert Stein, a Rice University professor who has helped put in place vote-by-mail systems.

Amelia Showalter, who was the data analytics director for President Barack Obama’s 2012 campaign, found in deeply reported studies of all-mail elections in Colorado in 2014 and Utah in 2016 that there were very slight partisan advantages in each race.

The Colorado study found that Republicans outperformed their predicted turnout in 2014 by a slightly higher margin than did Democrats. The G.O.P.’s candidate for Senate, Cory Gardner, ousted the Democratic incumbent, Senator Mark Udall, and Republicans won three of the four other statewide races on the ballot.

Two years later, in Utah, Democrats gained an equally slight advantage in counties that had switched to all-mail voting.

Both states saw overall turnout increase — especially among those voters considered least likely to participate in the elections.

Even before the coronavirus emerged as a global threat, Democrats had generally favored ways to expand access to voting by mail, while Republicans frequently argued in favor of tightening voter identification and registration requirements, claiming without evidence that easing restrictions invited voter fraud.

This wasn’t always the case. Republicans in Florida and Arizona, states with large populations of retirees, who tend to skew Republican, have pushed for years to expand vote-by-mail.

Thad Kousser, the chairman of the political science department at the University of California, San Diego, said that voting by mail in California was historically seen as especially helpful to older people and rural voters, who are more likely to be Republican. He called Mr. Trump’s statements a “gross exaggeration of any partisan effect we’re likely to see.”

“There are still Republicans elected in many of the areas that have voting by mail,” Dr. Kousser said. “Democrats and Republicans alike appreciate this option.”

So, what difference does universal vote-by-mail make?

Ms. Showalter’s studies of Colorado and Utah found that mailing ballots to all voters did tend to increase turnout. And Oregon and Washington, the states that pioneered all-mail elections, have long been among the highest-turnout states in presidential elections.

A 2013 study of voters in Washington by professors at Yale and the University of California, San Diego, found that voting by mail increased turnout by 2 to 4 percent, with low-participating voters more likely to be influenced than others.

But it was impossible to tell whether those voters were Republicans or Democrats, according to one of the study’s authors, Gregory Huber, a professor of political science at Yale.

“Whether the marginal nonvoter — the person induced to vote by the availability of vote-by-mail — is Democrat or Republican is less clear,” Dr. Huber said in an email, referring to voters who are ambivalent about the process and decide based on outside events.

Filling out a ballot at home also affords people more time to think about their vote. Research by Dr. Stein, the Rice University professor, found that voters spent about three and a half minutes when they went to a voting booth, but took about two days to complete a ballot they had received at home.

“Vote-by-mail has a way of affecting voter turnout in a way that we don’t always think about,” he said. “It increases turnout and attention for races that you would expect people would not vote for, like county judges and people you’ve never heard of.”

Charles Stewart III, a professor of political science at the Massachusetts Institute of Technology, said the evidence so far on which party benefits had been inconclusive, citing numbers from the 2016 North Carolina election showing that Republicans were more likely to vote by mail than Democrats.

Ms. Showalter found the biggest turnout difference in all-mail elections came among people who were the least likely to vote. These voters tend to pay the least attention to politics and are the most ideologically flexible.

In fact, all-mail voting makes some Democrats nervous. One reason is the finding in some studies that black and Latino voters — two key groups in the party’s base — are less likely to embrace mail voting than white voters.

Dr. Kousser pointed to a survey of California voters that revealed differences along racial and ethnic lines in voting by mail, with black and Latino voters about five percentage points less likely to favor it than white voters.

“Vote-by-mail is a little less popular as an option among Latino and African-Americans than whites and Asian-Americans,” Dr. Kousser said. “The N.A.A.C.P. has said they’re concerned about a shift to only vote-by-mail.”

As for the party’s younger voters, they tend to be more transient — less likely to have a current address on file with elections authorities.

“There is justified concern that Democratic-leaning voters may be disadvantaged through vote-by-mail systems,” said Brian Dunn, an Obama campaign alumnus who is a founder of Deliver My Vote, which encourages voters to sign up to receive mail ballots at home in states that allow it. “People like caregivers, gig-sector employees or those working multiple jobs may not update their address as they move, causing them to lose their ability to vote safely and easily.”

This concern emerged recently during deliberations by the Maryland Board of Elections over whether to conduct the state’s June 2 primary entirely by mail.

The board decided to keep a limited number of polling places open after Democratic legislative leaders, in a letter to Gov. Larry Hogan, a Republican, objected to an all-mail format, raising concerns about its potential impact on black voters.

“Most vote-by-mail states are overwhelmingly white,” the letter said, then cited a 2011 study sponsored by the Pew Charitable Trusts that found mandatory voting by mail reduced the chances that a person would vote, particularly among urban voters, who were 50 percent less likely to vote in an all-mail election.

Why are some Republicans eager to adopt vote-by-mail?

Despite Mr. Trump’s opposition, there is ample Republican support for transitioning to mail elections.

Kim Wyman, the Republican secretary of state in Washington, pushed for mail elections as a local official. She said she didn’t believe that voting by mail helped either party in her state.

“There would be those who say, ‘You haven’t elected a Republican governor since 1980 in Washington,’ and our state certainly leans blue in terms of outcome,” Ms. Wyman said in an interview. “But I think if you do a deeper drive, we’re a purple state. I think a lot of those elections were won and lost with very small margins.”

“When you look at states that are vote by mail, you have a mix of blue and red and states,” she said. “Utah is pretty red.”

Michael Meyers, a Republican whose data firm, TargetPoint Consulting, has guided G.O.P. presidential campaigns since 2004, said Republican data and voter contact programs were superior to what Democrats had, meaning all-mail elections could be advantageous for conservatives.

“Every time we do something that scares Republicans, that makes voting easier to do, we tend to freak out about it and then figure out a way to level the playing field,” Mr. Meyers said. “In some respect I think there is some advantage to it. While I am concerned about voter fraud and security, on straight mechanics, it doesn’t scare me that much.”