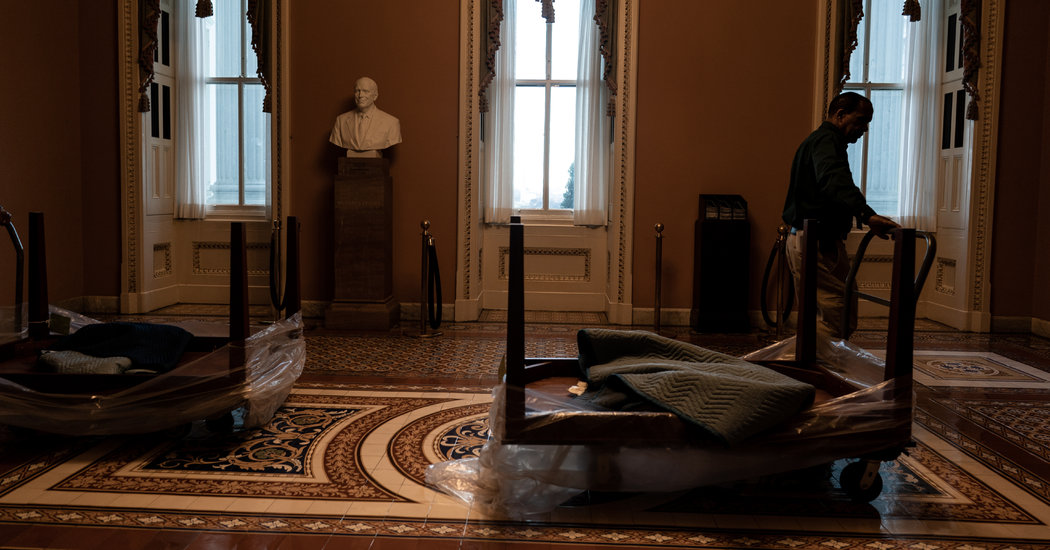 WASHINGTON — Twenty-one years ago, Capitol Hill carpenters custom-designed and built a pair of curved tables that could fit in the cramped Senate chamber and serve as workspace for the House managers and White House lawyers during the impeachment trial of President Bill Clinton.

Now, after sitting in storage for more than two decades, preserved as historical artifacts that might never be used again, the tables are being dusted off and moved to the Senate floor, part of a physical transformation inside the majestic chamber as it is converted from a place where legislation is debated to a one-of-a-kind courtroom where the fate of a president is decided.

“They made them after the impeachment articles were voted on,” James W. Ziglar, the former Senate sergeant-at-arms, said of the tables. Mr. Ziglar was in charge of the logistics for the Clinton impeachment trial in 1999.

Over the next few days, the oversize tables will again be wedged between the front row of the senators’ wooden desks and the marble-and-polished-wood Senate rostrum, so they are ready next week for the start of oral arguments in President Trump’s impeachment trial.

It is just one of a host of subtle changes being made in the Capitol to accommodate the third presidential impeachment trial in United States history.

Because smartphones, tablets and other electronic gadgets are expressly forbidden when the trial is in session, senators will be required to leave them behind.

To accommodate them, Capitol carpenters have installed a cabinet of cubbyholes, complete with charging cables, in the cloakrooms. As senators enter the chamber each day, they will be able to drop off iPhones or iPads in their assigned compartments, much the way kindergartners deposit their galoshes and backpacks at the start of the school day.

Additional cubbies have been stationed outside the Senate doors for visiting House members to drop off their electronics. Chairs and desks are being brought into the back of the chamber for staff, who will not be permitted to stand during the trial, as aides normally do when they congregate there during legislative debates.

Outside the Senate chamber itself, brass stanchions with maroon velvet ropes are being set up liberally to control the crowds of journalists on hand to cover the historic event.

The addition of furniture is turning what is already a surprisingly small chamber into an even more cramped space for senators, the chief justice, a variety of aides and the two opposing impeachment teams. In some places, the president’s lawyers and the House managers will be seated mere inches from the senators who will serve as jurors.

It all appears so grand on television. But what can look cavernous on C-Span can feel quite crowded in person.

“You don’t realize how small the Senate is until it happens,” said Senator Patrick J. Leahy, Democrat of Vermont, recalling the many hours he spent sitting at his desk in the chamber during Mr. Clinton’s nearly monthlong impeachment trial. “If it seems small the first day, I guarantee you by two or three days, it is really small.”

Impeachment also reshuffles the grand spaces outside the Senate chamber, upending the lay of the land in a body where prime real estate is allocated according to seniority.

During the trial, the President’s Room, one of the Senate’s most ornate, will become an office for Chief Justice John G. Roberts Jr., the presiding officer. Chief Justice William H. Rehnquist worked out of the same room, just outside a set of doors to the Senate chamber that are inaccessible to the public and the news media, during Mr. Clinton’s trial.

“It allowed the chief to come and go with less moving through the chamber,” Mr. Ziglar said. “That provided security and for him to not be hassled by senators and others.”

“They all wanted to lobby him,” he added. “After senators had tried to corner him, I did have to go to explain to them: ‘Guys, you don’t lobby the chief justice.’”

The House impeachment managers will lay claim to coveted office space just off the Senate floor, taking over a room that belongs to the Committee on Rules and Administration, down a hallway with tile mosaics of Presidents Abraham Lincoln and James A. Garfield. The vice president’s office, normally in use on days when he is in the Senate for meetings or to preside over a debate and cast a tiebreaking vote, will be turned over instead to Mr. Trump’s defense team.

During Mr. Clinton’s trial, that tradition caused some consternation for Republican House managers, who complained about being seated so close to the president’s allies. White House lawyers likewise griped about having to defend Mr. Clinton while sitting next to Republican senators.

Some things will not change when the trial begins. Each senator will sit at his or her own wooden desk during opening statements and hours of arguments from both sides. Those desks will not move from their usual location arranged in a semicircle in the Senate chamber.

But the trial tables are only for special occasions. Mr. Ziglar recalled that the Capitol carpenters waited to build them until it was absolutely clear they would be needed — after the House voted to impeach Mr. Clinton.

“We had already planned for it,” he said, “but we didn’t execute until the impeachment articles were actually passed, because that’s being presumptuous, I suppose.”