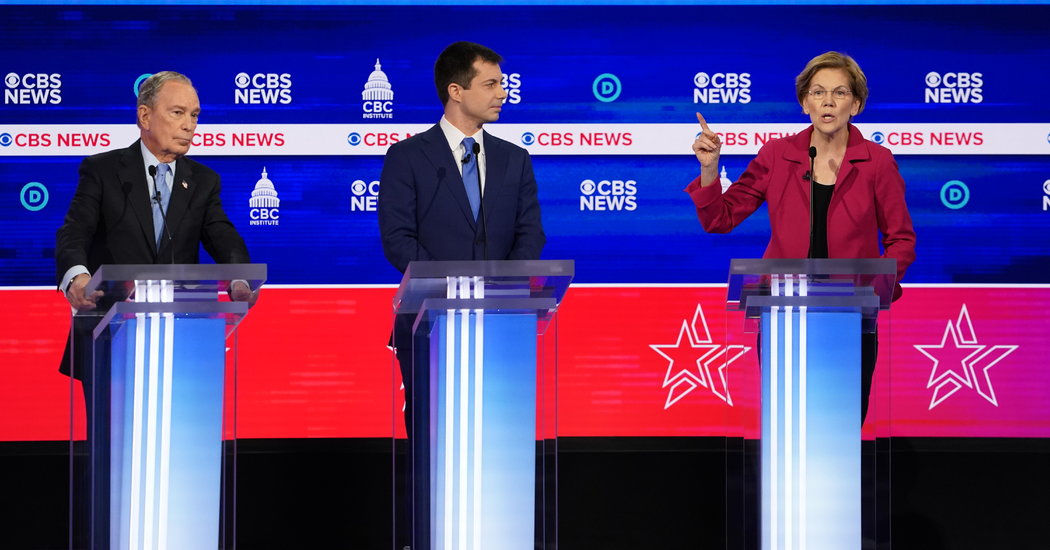 In a moment that briefly froze the debate stage in Charleston, S.C., on Tuesday, Senator Elizabeth Warren explained why she thought Michael R. Bloomberg was the “riskiest” candidate for the Democratic Party to nominate, with a pointed recitation of his history of crude and sexist comments.

Recalling pregnancy discrimination she had faced as a special-education teacher, Ms. Warren lamented that she hadn’t had a union or a federal law protecting her. And then she turned to Mr. Bloomberg.

“At least I didn’t have a boss who said to me, ‘Kill it,’ the way that Mayor Bloomberg is alleged to have said to one of his pregnant employees,” Ms. Warren said. “People want a chance to hear from the women who have worked for Mayor Bloomberg.”

Mr. Bloomberg quickly denied the allegation: “I never said that, and for the record, if she was a teacher in New York City, she would never have had that problem. We treated our teachers the right way, and the unions will tell you exactly that.”

Gayle King, one of the moderators, challenged Ms. Warren to provide evidence that Mr. Bloomberg had made the comment. Ms. Warren said the evidence was simple.

According to a lawsuit filed in 1997, Mr. Bloomberg once told a female employee who was expecting a baby to “kill it” before grumbling about the number of pregnant women at his company. Mr. Bloomberg denied making the remark at the time, and the case was settled with no admission of guilt. Earlier this month, a co-worker told The Washington Post that he had heard the conversation and corroborated the woman’s account.

In an interview after the debate, MSNBC’s Chris Matthews pressed Ms. Warren, asking her why she believed “the former mayor of New York said that to a pregnant employee” when Mr. Bloomberg had denied doing so.

“A pregnant employee sure said he did,” Ms. Warren replied. “Why shouldn’t I believe her?”

She said, as she had during the debate and many times before, that pregnancy discrimination was personal for her because she had once lost a teaching job after becoming pregnant. Such discrimination is rampant, she said, yet “men all across this country say, ‘Oh my gosh, he never would have said that.’”

Why, she asked, were the woman’s own words not compelling? In a he-said-she-said situation, why was Mr. Matthews’s immediate instinct to believe the man?

When Mr. Matthews pushed her to say outright that she thought Mr. Bloomberg was lying, she responded, “I believe the woman, which means he’s not telling the truth.”

“Why would he lie?” Mr. Matthews asked.

“Why would she lie?” Ms. Warren responded.

During the debate, Ms. Warren also challenged Mr. Bloomberg over his announcement last week that he was willing to release three women from nondisclosure agreements with his company so they could discuss their complaints about him publicly. As she said on Friday, it was a limited announcement by Mr. Bloomberg, and “not good enough.”

“Let us have the women have an opportunity to speak,” Ms. Warren said. “The Bloomberg corporations and Mayor Bloomberg himself have been accused of discrimination. They are bound by nondisclosures so that they cannot speak. If he says there is nothing to hide here, then sign a blanket release and let those women speak out so that they can tell their stories the way I can tell my story: without having the fear that they’re going to be sued by a billionaire.”

The back-and-forth was a continuation of a confrontation that began during the last debate, when Ms. Warren quoted comments the mayor had reportedly made, describing him as “a billionaire who calls women ‘fat broads’ and ‘horse-faced lesbians.’”

Long before he even became a politician, Mr. Bloomberg had a reputation for crude and sexist comments. In 2012, while mayor, Mr. Bloomberg urged two guests at a party to “look at the ass on her.”

In November, when asked about the comments by The New York Times, a spokesman for Mr. Bloomberg offered a note of contrition, but did not go so far as to apologize.

“Mike has come to see that some of what he has said is disrespectful and wrong,” said the spokesman, Stu Loeser. “He believes his words have not always aligned with his values and the way he has led his life.”

Ms. King also challenged Mr. Bloomberg broadly on his comments, noting that during the last debate he called them jokes, and asked: Did these women misinterpret your jokes or were you wrong to have made them?

Here is a brief transcript of the exchange:

BLOOMBERG: Probably wrong to make the jokes. I don’t remember what they were. If it bothered them, I was wrong, and I apologize. I’m sorry for that. But what happened here is we went back 40 years and we could only find three case where women said they were uncomfortable. Nobody accused me of doing anything other than just making a comment or two. And what the senator did suggest was that we release these women from the nondisclosure agreement. I did that two days later, and my company has said we will not use nondisclosure agreements ever again. The senator has got it. And I don’t know what else she wants us to do.

BLOOMBERG: We’re following exactly what she asked to do.

WARREN: I’ll tell you exactly what I want to do.

BLOOMBERG: And the trouble is with this senator, enough is never enough. I’m going to start focusing on some of these other things. We just cannot continue to relitigate this every time. We did what she asked, and, thank you, we’ve probably made the world better because of it. And by my company renouncing using these, we probably changed, hopefully, the corporate landscape all across America.

BUTTIGIEG: If you get nominated, we’ll be relitigating this all year.

WARREN: He did not do what I asked.