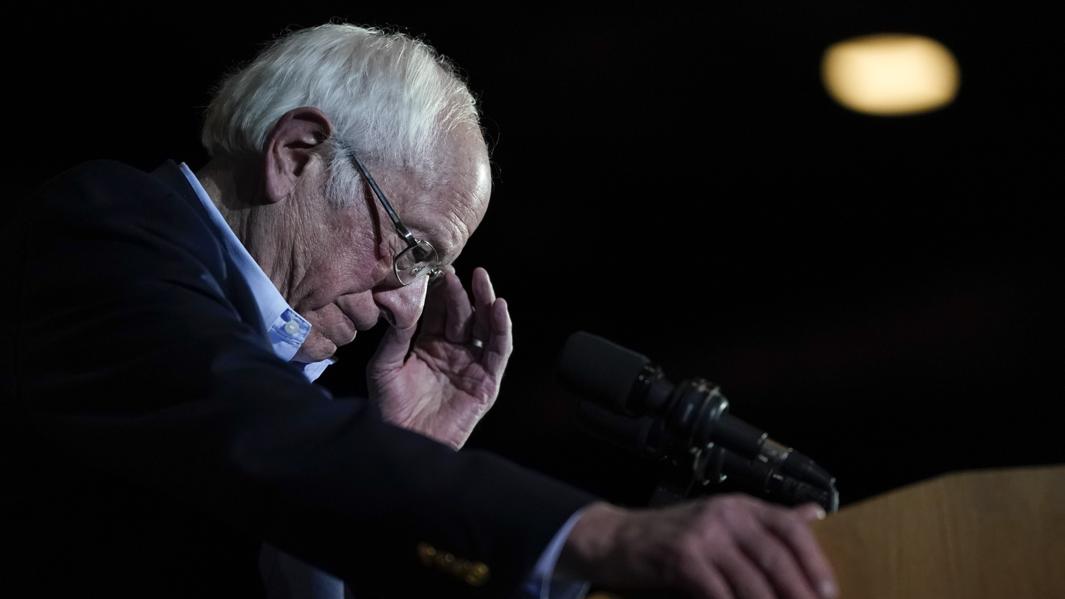 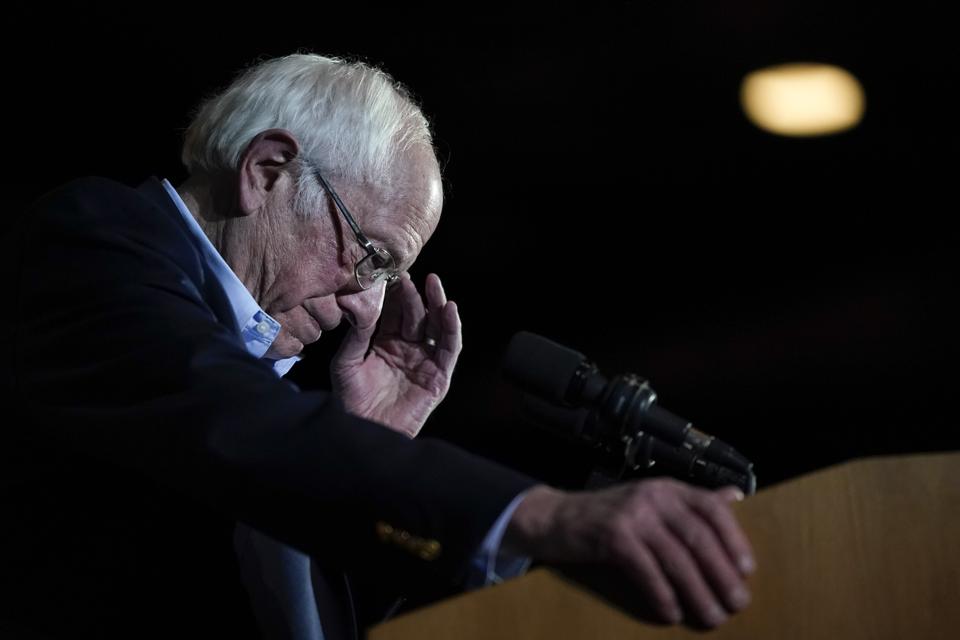 SAN ANTONIO, TX – FEBRUARY 22: Democratic presidential candidate Sen. Bernie Sanders (I-VT) speaks … [+] after winning the Nevada caucuses during a campaign rally at Cowboys Dancehall on February 22, 2020 in San Antonio, Texas. With early voting underway in Texas, Sanders is holding four rallies in the delegate-rich state this weekend before traveling on to South Carolina. Texas holds their primary on Super Tuesday March 3rd, along with over a dozen other states (Photo by Drew Angerer/Getty Images)

Vermont Sen. Bernie Sanders has made some extraordinary promises in his campaign for president, including free health care, a federal jobs guarantee, universal forgiveness of all student debt, and radical expansions of nearly every government program from Social Security to housing subsidies. When asked at a CNN town hall last night how he would pay for this gargantuan expansion of government, Sen. Sanders presented moderator Chris Cuomo with a new document that Sanders claimed detailed how he would pay for his proposals. But don’t be fooled: these numbers still don’t add up, and Sanders should be pressed to explain his magic math at tonight’s debate.

The first problem is that the list of Sanders’ proposed spending increases is incomplete. Sanders has proposed costly plans for K-12 education, expanding disability insurance, paid family leave, and more that were not accounted for in the new document. He also grossly understates the cost of his Medicare for All plan by citing a flawed analysis that neglected to incorporate the costs of specific benefits Sanders proposes, such as universal coverage for long-term services and supports, and failed to account for how offering universal health-care benefits more generous than those offered by any other country on earth would increase utilization of health services.

Sanders and his surrogates regularly claim that critics are wrong to focus on how much Medicare for All increases government costs because it would reduce the total cost of health care. But independent analyses from the Urban Institute and Committee for a Responsible Federal Budget have concluded that even with the aggressive price controls he has proposed, Sanders’ Medicare-for-All framework would actually increase national health expenditures by up to $7 trillion. Sanders himself also admitted in a 60 minutes interview this weekend that his Medicare-for-All plan would likely cost around $30 trillion, yet the list of “options” Sanders has offered to pay for them (options which, it should be noted, he has never explicitly endorsed enacting together) would together cover less than 60 percent of that amount by the Sanders campaign’s own accounting.

In January, the Progressive Policy Institute published comprehensive cost estimates of the proposals offered by each of the leading candidates for president before the Iowa Caucus. After incorporating new proposals that Sanders has released since the publication of our analysis and minor methodological updates, PPI concludes that Sanders has now proposed over $53 trillion of new spending over the next 10 years – an amount that would roughly double the size of the federal government. Our estimate is, if anything, overly charitable to Sanders, as it accepts most of the Sanders campaign’s cost estimates outside of Medicare for All and assumes significant overlap in the costs of his proposed federal jobs guarantee and other spending proposals. Other analysts have estimated the total costs of Sanders’ proposals could be anywhere between $60 trillion and $100 trillion over 10 years. 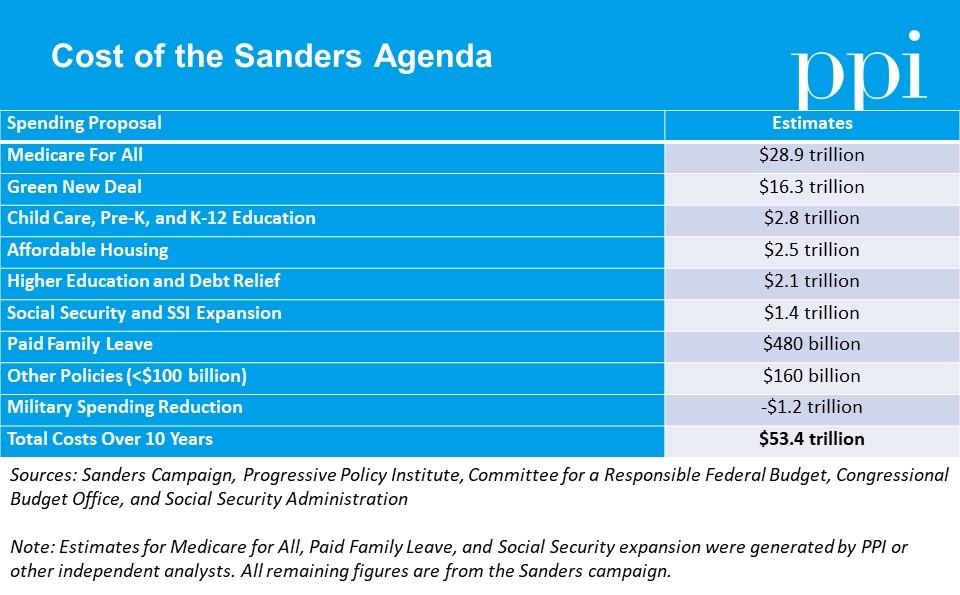 An accounting of spending increases proposed by the Bernie Sanders presidential campaign. 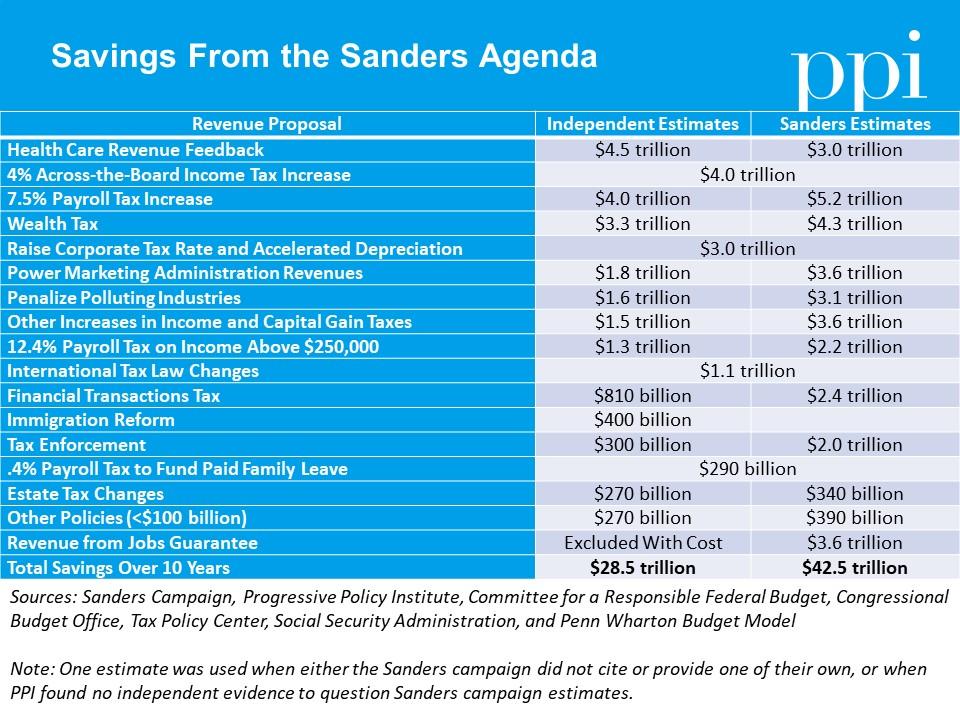 An accounting of revenue increases proposed by the Bernie Sanders presidential campaign.

Sanders’ proposed pay-fors don’t even come close to covering these costs. The document Sanders published last night, along with others released earlier in his campaign, claim to collectively raise less than $43 trillion in new revenue – meaning that he’s at least $10 trillion short. But the revenue projections Sanders uses for his tax proposals are well outside the mainstream of what independent analysts at the Committee for a Responsible Federal Budget, Congressional Budget Office, Tax Policy Center, Penn Wharton Budget Model, and others have estimated. After reconciling Sanders’ latest list of pay-fors with these independent estimates, PPI concludes that even if Congress were to adopt every single revenue option Sanders has offered for consideration, it would fall almost $25 trillion short of his proposed spending increases over the next decade – leaving a gap nearly equal to the total value of all goods and services produced by the U.S. economy in one year.

Sanders wants voters to reward him for proposing a left-wing wishlist of spending increases and take him at his word that taxes on billionaires will pay for it, but the math just doesn’t add up. He has already embraced every tax increase on wealthy Americans imaginable and still comes up fourteen figures short. Will the middle class be willing to foot the bill in the form of dramatically higher taxes? Will young Americans accept the burden of financing “the revolution” with a doubling of their government debt? At a time when President Trump has plunged the nation into trillion-dollar deficits as far as the eye can see, the worst thing Democrats could do is let him off the hook by nominating a candidate who is promising them the same kind of voodoo economics on a far greater scale.