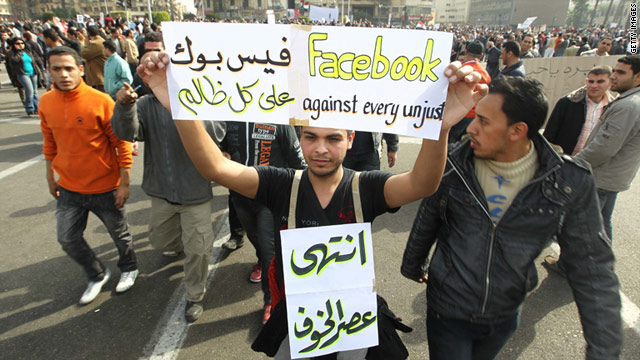 A decade ago, the so-called “Facebook Revolution” dead-ended in the election of a full-blown Sharia fanatic in Egypt. Here is what I wrote in my syndicated column that week. As I conceded a few years afterwards, there would eventually be a “Facebook Revolution” – not for Egyptians, but for the west, and in full flower by the Year of Covid and the end of the Trump Administration. Those societies not yet hooked on the social soma are in some ways enviable:

So how’s that old Arab Spring going? You remember – the “Facebook Revolution.” As I write, they’re counting the votes in Egypt’s presidential election, so by the time you read this the pecking order may have changed somewhat. But currently in first place is the Muslim Brotherhood candidate Mohammed Morsi, who in an inspiring stump speech before the students of Cairo University the other night told them, “Death in the name of Allah is our goal.”

In second place is the military’s man, Ahmed Shafiq, Hosni Mubarak’s last Prime Minister and a man who in a recent television interview said that “unfortunately the revolution succeeded.”

In third place is moderate Islamist Abdel-Moneim Abolfotoh, a 9/11 Truther endorsed by the terrorist organization al-Gama’a al-Islamiya. He’s a “moderate” because he thinks Egyptian Christians should be allowed to run for the presidency, although they shouldn’t be allowed to win.

As I said, this thrilling race is by no means over, and one would not rule out an eventual third-place finish by a rival beacon of progress such as Amr Moussa, the longtime Arab League flack and former Mubarak Foreign Minister. So what happened to all those candidates embodying the spirit of Egypt’s modern progressive democratic youth movement that all those Western media rubes were cooing over in Tahrir Square a year ago? How are they doing in Egypt’s first free presidential election?

I don’t know about you, but I have the feeling that Messrs Morsi, Shafiq and Abolfotoh are not spending much time on Facebook, or even on Twitter. Indeed, for a “social media revolution,” the principal beneficiaries seem to be remarkably antisocial: liberated from the grip of Mubarak, the new Egypt is a land where the Israeli Embassy gets attacked and ransacked, Christians get killed and their churches burned to the ground, female reporters for the Western media are sexually assaulted in broad daylight, and for the rest of the gals a woman’s place is in the clitoridectomy clinic. In the course of the election campaign, the Muslim Brotherhood has cast off the veil of modernity and moderation that so beguiled the U.S. State Department and the New York Times: Khairat el-Shater, the deputy leader, now says that “the Quran is our Constitution” and that Mubarak-era laws permitting, for example, women to seek divorce should be revised. As the TV cleric Safwat Hegazy told thousands of supporters at a Brotherhood rally in the Nile Delta, “We are seeing the dream of the Islamic Caliphate coming true.”

Thus, the Facebook Revolution one year on. Status: It’s not that complicated. Since the founding of the Kingdom of Egypt in 1922, the country has spent the last nine decades getting worse. Mubarak’s kleptocracy was worse than Farouk’s ramshackle kingdom, and the new Egypt will be worse still.

At a certain level, there’s nothing very new about this. In the early stages of revolution, students are often on the front line, mainly because they’ve got nothing else to do all day. But by the time the strongman is being sworn in at the presidential palace they’re usually long gone from the scene, supplanted by harder and better organized forces. Was it ever likely that Western “social media” would change this familiar trajectory? National Review‘s editor Rich Lowry, from whose byline picture the pixie twinkle of boyish charm has yet to fade, was nevertheless sounding as cranky an old coot as I usually do when he declared that “Facebook founder Mark Zuckerberg is to uselessness what Henry Ford was to the automobile” and deplored a world in which millions of people spend their time “passing around photos of pets in party costumes, telling us whether they are having a good or bad hair day, and playing the farming-simulation game FarmVille.” It is not necessary to agree with the full majestic sweep of Lowry’s dismissal to note that neither Lenin nor Mao is known to have taken a photograph of his pet in a party costume, or even a Party ] costume, and that both men played their farming-simulation games for real, and on an industrial scale. Putting aside its deficiencies in revolution-mobilizing, Facebook, until its shares headed south this week, had a valuation of over $100 billion – or about two-thirds of the GDP of New Zealand. Which seems a little high to me.

Whatever one feels about the Shariah-enforcing, Jew-hating, genital-mutilating enthusiasts of the Muslim Brotherhood, they do accurately reflect a significant slice – and perhaps a majority – of the Egyptian people. The problem with the old-school dictators was that, in the end, Mubarak, Ben Ali and Gadhafi didn’t represent anything other than their Swiss bank accounts. The question for the wider world is what do “social media” represent? If they supposedly embody the forces of progress and modernity, then they’ve just taken an electoral pounding from guys who haven’t had a new idea since the seventh century.

No one should begrudge Mark Zuckerberg his billions, and decent people should revile in the strongest terms thug-senator Chuck Schumer’s attempts to punish Zuckerberg’s partner Eduardo Saverin for wishing to enjoy his profits under the less-confiscatory tax arrangements of Singapore: It is a sign of terminal desperation when regimes that can’t compete for talent focus their energies on ever more elaborate procedures to prevent freeborn individuals voting with their feet.

But it is also a sign of desperation to talk up amiable diversions for pampered solipsistic Westerners as an irresistible force of modernity. One of the basic defects of the Bush administration’s designation of a “war on terror” was that it emphasized symptoms (bombs and bombers) over causes (the underlying ideology). In the war of ideas, the West has chosen not to compete, under the erroneous assumption that the ever more refined delivery systems for its sensual distractions are a Big Idea in and of themselves. They’re not. If you know your Tocqueville, they sound awfully like his prediction of a world in which “an innumerable crowd of like and equal men …revolve on themselves without repose,” a phrase which nicely distills the unending busyness of our gaudy novelties.

Don’t get me wrong; I like goofy pet photos. But can these gizmos do anything else? Yes, in theory. But, in practice, is a culture that “revolves on itself without repose” likely to be that effective at communicating real ideas to the wider world? Ideas on liberty, free speech, property rights, women’s rights and all the other things conspicuous by their absence in the philosophies of Egypt’s new political class. In the end, a revolution cannot be Tweeted. Whatever their defects, the unlovely forces running the new Egypt understand the difference between actually mutilating a young girl’s genitals to deny her the possibility of sexual pleasure, and merely “following” your local clitoridectomist on his Twitter feed.

A century ago, the West exported its values. So, in Farouk’s Egypt, at the start of a new legislative session, the King was driven to his toytown parliament to deliver the speech from the throne in an explicit if ramshackle simulacrum of Westminster’s rituals of constitutional monarchy. Today, we decline to export values, and complacently assume, as the very term “Facebook Revolution” suggests, that technology marches in support of modernity. It doesn’t. Facebook’s flat IPO and Egypt’s presidential election are in that sense part of the same story, of a developed world whose definitions of innovation and achievement have become too shrunken and undernourished. The vote in Egypt tells us a lot about them, but it also tells us something about us.

Mark Steyn Club members are welcome to add their thoughts in the Comments section. Still to come this weekend at SteynOnline are Rick McGinnis’ movie column, The Hundred Years Ago Show, Steyn’s Sunday Poem and Song of the Week.