Here are the latest updates:

India has recorded the highest spike of 15,968 new coronavirus cases in the last 24 hours, taking the total to to 456,183, with Mumbai and New Delhi as the worst-hit cities in the country.

The Health Ministry also reported a record 24-hour increase of 465 deaths due to COVID-19, driving fatalities to 14,476.

Hi, this is Elizabeth Melimopoulos in Doha taking over the live updates from my colleague  Kate Mayberry  in Kuala Lumpur.

Sophia Chan, Hong Kong’s secretary for food and health, defended a planned travel scheme requiring residents of the city to share their coronavirus test results with authorities in Guangdong province in mainland China, dismissing concerns that residents’ sensitive personal data, such as medical records, could be transferred to mainland security authorities.

Hong Kong will develop a “Health Code” system to enable “the virus test results of participants of the pilot scheme in Hong Kong to be uploaded onto the code” and shared with mainland authorities, she said. Travellers will not be required to install a mobile application, she said.

“The … computer system will only collect basic personal information and nucleic acid test results from applicants for the purpose of applying for the ‘Hong Kong Health Code’. The development process is premised on the protection of personal privacy and the code exchange procedures must also be explicitly initiated and agreed by the applicant,” she added.

Ibrahim Mohamed Solih, president of the Maldives, says the island nation is opening its borders on July 15 to tourist arrivals from all countries.

The Indian Ocean archipelago’s economy is heavily dependent on tourism, and arrivals will not be subject to quarantine measures with only symptomatic travellers required to undergo mandatory COVID-19 testing at the airport, according to the tourism ministry.

Testing will be made available for travellers who require it to return to their countries or continue on their onward journeys, the ministry added.

Volunteers in Indonesia introduced an “alertness index” mapping coronavirus cases in every city and regency in the country, with the worst-affected places marked in deep red.

“At the end of the day, the public needs transparent data about their risks. With reliable and open data, they can cautiously decide whether to carry out an activity in the public sphere,” Ronald Bessie, coordinator for the KawalCOVID-9 database, was quoted as saying by the Jakarta Post.

More than 100,000 people had died from COVID-19 in Latin American by the end of Tuesday, with more than half of confirmed deaths logged in Brazil, according to tallies by Reuters and AFP news agencies.

Here is a breakdown of case-loads and death tolls in the worst affected countries:

04:23 GMT – In conflict-hit countries, coronavirus testing may not reach women

Big gaps between the number of male and female coronavirus cases in parts of Africa, Asia and the Middle East suggest that women may be struggling to access testing or care, an aid agency told the Thomson Reuters Foundation.

In Pakistan, Afghanistan and Yemen, more than 70 percent of reported cases were male, compared with a global average of 51 percent, the same in the Central African Republic, Chad and Somalia, said the International Rescue Committee (IRC).

Studies in China, Europe and the US have shown that men are more likely than women to be hospitalised and die of coronavirus, but they have not shown the same gender gap in cases as elsewhere. In most of Europe, the numbers of cases are roughly equal between men and women.

Health authorities in China reported 12 new coronavirus cases on Wednesday, with seven in the country’s capital, Beijing, indicating that a spike in the city appears to be on the wane.

Beijing’s outbreak saw a total of 249 people infected since June 11, most cases linked to the city’s biggest wholesale market, and led to new lockdowns and the cancellation of classes.

Since then, three million test samples have been taken from 2.43 million people in the city, a senior municipal health official said on Tuesday. The city can now conduct more than 300,000 nucleic acid tests per day, compared with 40,000 in March, said Zhang Hua, deputy director of the Beijing Health Commission. 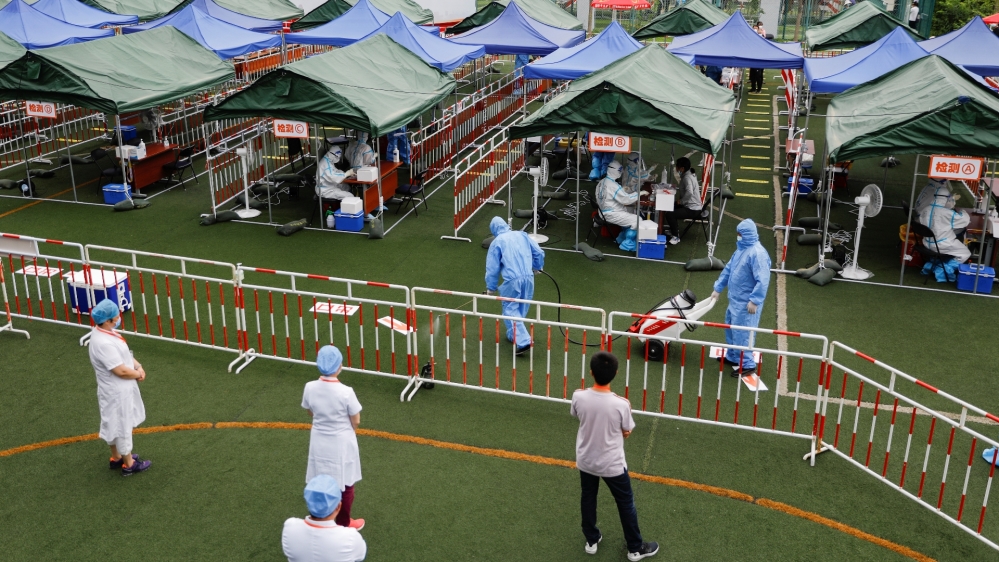 Jay Inslee, the governor of the US state of Washington, ordered residents to wear face masks in public after the region saw its positive tests rise by 35 percent last week.

“This is about saving lives. It’s about reopening our businesses. And it’s about showing respect and care for one another,” Inslee said.

The states of Arizona, California, Mississippi and Nevada have reported record numbers of new cases of COVID-19 while Texas set a record on Monday.

Mexico posted another record one-day increase in coronavirus cases: 6,288 confirmed infections on Tuesday and 793 more deaths, according to the Health Department. That brought Mexico’s total case-load to 191,410 and death toll to 23,377.

Officials acknowledge both are undercounts due to extremely low testing rates. Mexico has performed only about half a million tests, roughly one for every 250 inhabitants.

Mexico has also had an extremely high rate of infections among healthcare professionals. About 39,000 – 20 percent – of the country’s confirmed cases are healthcare workers. There have been 584 deaths among doctors, nurses, technicians and hospital workers. 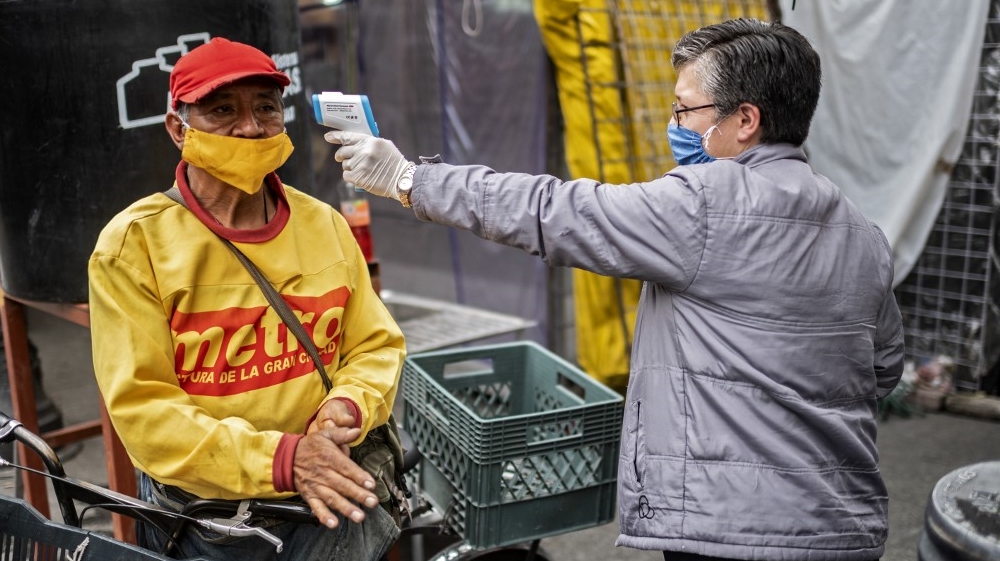 A man has his temperature checked at Iztapalapa market in Mexico City on June 22, 2020 [Pedro Pardo/ AFP]

02:00 GMT – MSF calls on GAVI to get drugs companies to sell vaccine at cost

Doctors Without Borders (MSF) and 40 civil society groups are calling on GAVI to review its pricing for future coronavirus vaccines, ahead of a Gavi board meeting due to start in Geneva later on Wednesday.

At issue is the COVAX Facility, a new mechanism Gavi developed to pay pharmaceutical companies up front for potential COVID-19 vaccines.

Among MSF’s concerns was the lack of transparency on how pricing is set by drug firms as well as the two-tier system of access to future COVID-19 vaccines bought through the COVAX Facility. Countries financed through donor assistance will only receive enough vaccines for the most vulnerable populations while wealthier nations will receive enough for a set percentage of their entire population, MSF said.

The #COVID19 pandemic has exposed the flaws in the current drug development system.

As @Gavi prepares for a Board meeting this week, we have some urgent recommendations to ensure that COVID-19 vaccines 💉 are accessible, affordable and available to EVERYONE who needs them. 👇 pic.twitter.com/2bLmPFF175

Australia has recorded its first death from coronavirus in more than a month, as new cases continue to spike in the southern state of Victoria.

The man who died was in his 80s, health authorities said.

US President Donald Trump visited the border with Mexico on Tuesday and claimed it had stopped both undocumented immigration and the coronavirus.

In the blazing heat, Trump briefly stopped to inspect a new section of the wall and scrawled his signature on the concrete and rebar structure.

Trump is looking to regain campaign momentum after a poor turnout for a weekend rally in Tulsa, Oklahoma.

Dr Anthony Fauci has warned that the next few weeks will be critical in stamping out coronavirus hotspots around the US.

“We’ve been hit badly,” Fauci told a House committee, adding he was “really quite concerned” about rising community spread in some states, including Arizona, where US President Donald Trump was holding a rally on Tuesday and viewing the construction of a border wall.

Fauci, who also stressed that testing would be stepped up, was speaking at the committee along with the heads of the Centers for Disease Control and Prevention, the Food and Drug Administration, and a top official at the Department of Health and Human Services.

Find out more about what they had to say here.

You can read all the updates from yesterday (June 23) here.