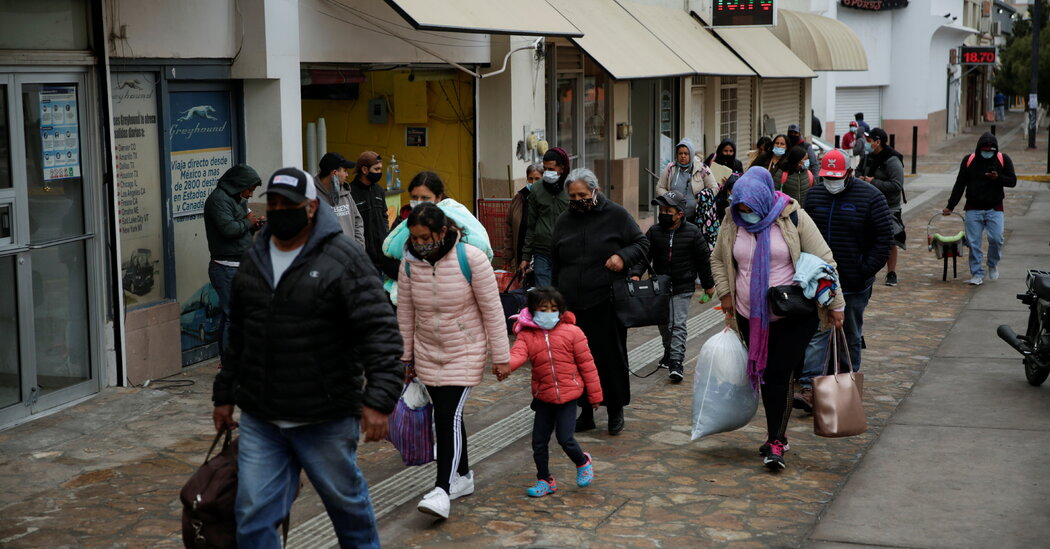 WASHINGTON — A federal appeals court on Friday lifted a block on a Trump-era policy of rapidly turning away migrant children as public health risks, ramping up pressure on the Biden administration to restore the asylum process at the southwestern border.

In March, the Trump administration effectively sealed the border from asylum seekers, citing the threat of the coronavirus. The latest court decision, from the U.S. Court of Appeals for the District of Columbia Circuit, reverses a lower-court ruling from November that found that expelling thousands of children without the opportunity to assess their claims for protection exceeded the authority of the public health emergency rule. President Donald J. Trump used the rule, from the Centers for Disease Control and Prevention, to empower border agents to rapidly return migrants to Mexico or to their home countries.

Ruth Clemens, a spokeswoman for the Department of Homeland Security, did not answer questions on Friday as to whether the expulsions would immediately restart. She instead issued a statement deferring to the Justice Department, which did not return a request for comment.

President Biden said during his candidacy that he would enact a more “humane policy” at the border, but his administration has not said publicly how it will handle the pandemic emergency rule. The Trump administration argued that the rule was necessary to prevent the spread of the coronavirus in detention facilities.

In an effort to prevent a rush to the southwestern border, Mr. Biden seemed to temper his pledge to roll back a number of the Trump administration’s border policies, saying last month that he would most likely need “the next six months.” But the prospect of agents again turning away children at the border is likely to renew pressure on the new administration.

Mr. Gelernt said that if the administration did not immediately lift the restrictions, it could still use its discretion to not apply the policy to children.

The three judges on the panel, all of whom were appointed by Mr. Trump, did not detail a reason for the reversal in their two-page order. Judge Emmet G. Sullivan of the U.S. District Court for the District of Columbia, an appointee of President Bill Clinton’s, said in November that while the order did allow the authorities to prevent the “introduction” of foreigners into the United States, it did not justify rapidly turning away children who were typically placed in shelters while they had their claims for refuge heard. The federal government has continued to apply the policy to migrant adults.

The Trump administration used the rule to expel nearly 200,000 migrants in the fiscal year that ended on Sept. 30, according to Customs and Border Protection data. More than 13,000 of those migrants were children traveling alone, according to the A.C.L.U.

Wendy Young, the president of Kids in Need of Defense, an advocacy organization for migrant children, noted that top medical officials had criticized the policy and that Mr. Biden had committed to “respecting science” in his response to the pandemic.

The rule expelling migrants at the border, Ms. Young said, “runs counter to this approach and places children and other vulnerable populations in danger and at heightened risk of human trafficking, violence and persecution.” Health officials from across the country previously wrote to the Trump administration that there was “no public health rationale for denying admission to individuals based on legal status.”

In the final weeks of Mr. Trump’s presidency, his top immigration officials held events around the country warning that if Mr. Biden rolled back his predecessor’s restrictions, it would result in increased border crossings. While homeland security officials often pointed to the C.D.C. emergency declaration as a justification for expelling migrants, the rule was pushed before the pandemic by the White House and specifically by Stephen Miller, the White House immigration hard-liner, to curtail migration at the border.

Biden administration officials have sought to prevent a potential uptick in migration, making moves even before Mr. Biden took office.

Susan Rice, the director of the Domestic Policy Council, told the Spanish-language news service EFE in December that migrants should “not at all believe the people in the region who are selling the idea that the border will suddenly be wide open to process everyone on the first day.”

Mr. Biden added that changing Mr. Trump’s policies immediately would be “the last thing we need” because it might lead to having “two million people on our border.”

Mr. Biden has moved forward with a far-reaching immigration agenda, announcing a plan to give 11 million undocumented immigrants a chance to become citizens in as little as eight years, halting construction of Mr. Trump’s border wall and suspending a policy that forced migrants to wait in Mexico while their asylum case is processed.

But the president has yet to announce a plan on how to resume the cases for those migrants who have been stuck in Mexico.

Mr. Biden has also already faced pushback on his immigration agenda. A federal judge in Texas this week temporarily blocked Mr. Biden’s pause on deportations. That judge, Drew B. Tipton, was also appointed by Mr. Trump.