The Trump administration is to pull federal paramilitaries out of Portland starting on Thursday in a major reversal after weeks of escalating protests and violence.

Oregon’s governor, Kate Brown, said she agreed to the pullout in talks with Vice-President Mike Pence.

Brown said state and city police officers will replace Department of Homeland Security agents in guarding the federal courthouse that has become the flashpoint for the protests.

“These federal officers have acted as an occupying force, refused accountability, and brought violence and strife to our community,” the governor said. The head of the US homeland security department said agents would stay near the courthouse until they were sure the plan was working.

‘I want to stand up to Trump’: Portland protesters unleash fury over BLM, Covid-19 and economy

Donald Trump said the pullout will not begin until the courthouse is protected.
“We’re not leaving until they secure their city. We told the governor, we told the mayor: secure your city,” said the president.

But the announcement is a significant retreat by the administration after Trump sent federal forces to Portland at the beginning of July to end months of Black Lives Matter protests he described as having dragged the city into anarchy.

Instead of quelling the unrest, the arrival of paramilitaries fuelled some of the biggest demonstrations since daily protests following the killing of George Floyd, a Black American, by a white police officer in Minneapolis in May.

The situation escalated particularly after agents in camouflage were filmed snatching protesters from the streets in unmarked vans.

Far from imposing order, the federal force, drawn from the border patrol, immigration service and US Marshals, was largely trapped inside the federal courthouse they were ostensibly there to protect, emerging each night to fire waves of teargas, baton rounds and stun grenades in street battles with the protesters. But the demonstrators retained ultimate control of the streets.

Anger at the presence of the paramilitaries brought thousands of people out each night and acted as a lightning rod for broader discontent with Trump, including over his chaotic and divisive handling of the coronavirus epidemic which has killed nearly 150,000 Americans and shows no signs of abating. 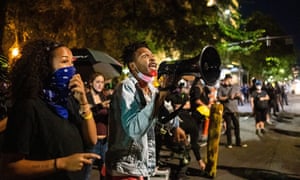 Najee Gow, an organiser for Black Lives Matter, gathers with other protesters at the courthouse. Photograph: Amy Harris/Rex/Shutterstock

Although the protesters will claim victory in achieving the demand of their nightly chant, “Feds go home”, the demonstrations are likely to continue with the focus shifting back toward the Portland city police with which there had been running battles before the arrival of the federal agents.

It is not immediately clear what impact the pullout will have on Trump’s threat to send federal forces to other cities, ostensibly to quell violent crimes.

The mayors of Chicago, Los Angeles, Atlanta and 11 other cities accused the president of deploying federal law enforcement officers “for political purposes” amid suspicions that Trump is more interested in creating conflict than ending it in the run-up to the election.

In a letter to the White House, the mayors said they were disturbed at the actions of federal agents in Portland, calling their failure to wear proper identification and the snatching of protesters off the streets “chilling”.

“These are tactics we expect from an authoritarian regime – not our democracy,” the letter said.

Although the arrival of the federal forces reinvigorated the protests for racial justice in Portland, the nightly battles also distracted from them. Tensions have been building between the demonstrators focused on storming the courthouse and those leading more peaceful protests for reform after Floyd’s killing.

The National Association for the Advancement of Colored People (NAACP) in Portland warned that the Black Lives Matter movement was being co-opted by “privileged white people” pursuing other agendas, such as anti-capitalism. It said they were playing into Trump’s hands by provoking nightly confrontations with the federal forces.

On Tuesday night, Najee Gow, an African American organiser for Black Lives Matter, waded into the group of a few dozen young white people taunting the federal agents. He accused them of racism for being more invested in fighting at the courthouse than pushing for racial justice.

“What are you doing? This is the racist shit we’re talking about. You don’t push a black agenda and do this,” he shouted at the white protesters who pulled back, but later returned.

“They want to destroy property. They are tarnishing the Black Lives movement and they are making a mockery out of Portland on the fucking world stage,” a furious Gow told the Guardian.