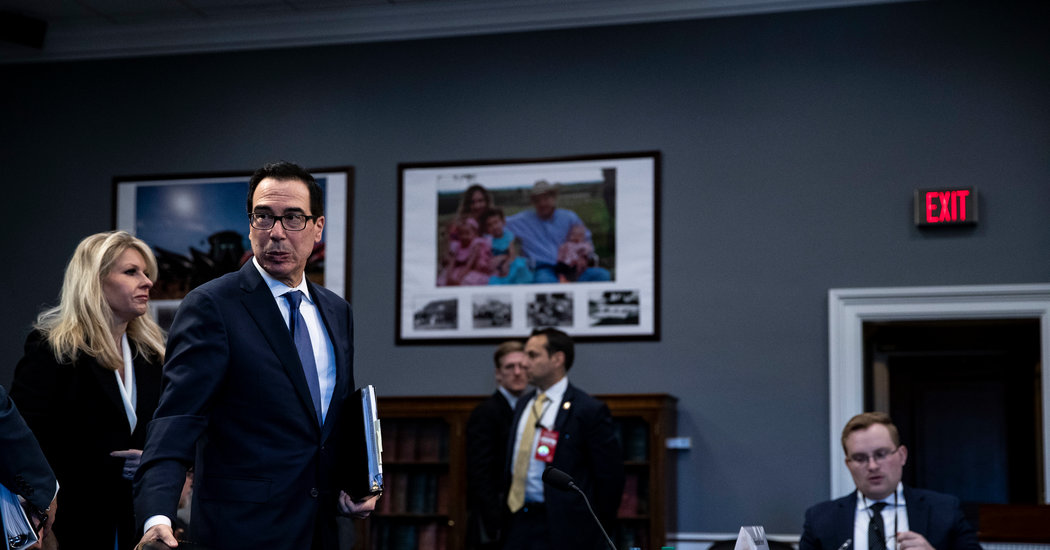 WASHINGTON — The coronavirus outbreak is putting the resilience of the financial system to its biggest test since the 2008 financial crisis, a critical moment that comes as the Trump administration continues efforts to relax Wall Street regulation.

The virus has sent financial markets into a tailspin. Investors are worried about economic fallout from an epidemic that is threatening to slow growth and eat into corporate profits by shuttering factories, forcing quarantines, curtailing travel and scrapping big events.

Stocks are plummeting, along with Treasury yields, and many economists and investors are beginning to express concern that financial vulnerabilities could exacerbate what is already poised to become an economic mess.

Banks are on more solid footing than they were ahead of the 2008 financial crisis, with higher capital and less ability to make risky bets with their own balance sheets than in the heady days of the mid-2000s housing bubble. But warning signs abound. Credit markets are beginning to show signs of strain, investors are fleeing indexes that track risky bonds, and some economists are questioning whether the coronavirus could spark a corporate debt crisis.

“If the virus triggers a sharper drop in profits or a bigger rise in borrowing costs than we envisage, then these pockets of vulnerability could blow up,” analysts at Capital Economics wrote in a note last week. “Although the global banking system appears to be better placed to deal with such turbulence now than at the time of the global financial crisis, at the very least this could exacerbate any virus-related global downturn.”

As recently as January, Federal Reserve officials expressed worry that “financial imbalances — including overvaluation and excessive indebtedness — could amplify an adverse shock to the economy.”

Corporate debt has skyrocketed over the past decade, and more than half of investment-grade company debt is just one notch above a “junk” rating, with BBB debt in the United States now totaling more than $3 trillion.

Such bonds are vulnerable to status downgrades in tough times, making that low-rated debt a particular concern because mutual funds are holding big chunks of it. Funds could be forced to dump those holdings quickly in the face of downgrades because many are not allowed to invest in junk bonds.

Leveraged loans, which banks and other financial institutions extend to already-indebted companies, have also ballooned. Since about 2012, outstanding leveraged loans now total about $1.2 trillion, roughly twice pre-crisis levels. The loans are often funded by investment vehicles that bundle, slice, and sell them off to investors — and because banks do not end up holding many them on their balance sheets, regulators have limited ability to oversee them.

To put the size of those vulnerable debt and loan piles in perspective, Americans had about $1.3 trillion in outstanding subprime mortgages headed into the 2008 crisis, based on Organization for Economic Cooperation and Development estimates. When those debts went bad, it helped knock the financial system to its knees.

Investors are already spooked about risky credit in a time of coronavirus. Indexes that track high-yield debt and leveraged loans have seen record outflows over the past two weeks, as people take their money and run, seeking safer investments.

“We are concerned about potential cracks in the U.S. credit cycle in an environment of dwindling corporate cash flows, which could lead to a sharp tightening of financial conditions that feeds back into the real economy,” Joachim Fels, global economic adviser at Pimco, wrote in a research note Sunday.

While banks have limited direct exposures to the riskiest loans — which could keep any messiness in that sector from turning into a full-blown financial meltdown — they and the broader economy would still be affected if things sour quickly.

“In the event of corporate debt distress, firms may reduce investment and cut payrolls to continue servicing their debt,” according to one 2019 Federal Deposit Insurance Corporation report. That could make it harder for households and businesses — bank customers — to pay back their own debt, and “banks could incur losses.”

And the financial crisis was painful, in part, because banks stopped lending, leaving consumers without access to cash. They could do that fairly abruptly in 2020 in part because of a new accounting standard, called current expected credit losses methodology, or CECL.

The rule took hold for big banks this year, and forces them to value loans over their lifetime — a measure meant to more accurately gauge risk, but one that could also make projected losses look more drastic when the economy is worsening. The change is expected to dissuade lenders from extending new mortgages and lines of credit during times of stress.

“To avoid huge accounting losses, which cut into capital, the effect would be to not lend, or to lend less,” said Joshua Ronen, an accounting professor at New York University. That could “paradoxically” hit the most cash-strapped borrowers, he said, since they are often the worst credit risk.

Strains to the financial system could come at a particularly bad time. Big financial firms outside the banking sector remain largely out of regulatory oversight, including asset managers, hedge funds, private equity firms and big insurers.

And the rules governing regulated institutions have become gradually less stringent. The Fed implemented a regulatory change last week, which one official — Gov. Lael Brainard, an Obama administration pick — warned could significantly reduce capital at the biggest banks. Last year, the Fed adjusted the structure of its annual stress tests, changes that could make it easier for banks to get regulatory approval to pay higher dividends or buy back their own shares.

Fed officials had already expressed concern in January that banks might be returning too much of their profits to shareholders, leaving them exposed if there is another big downturn. “Planned increases in dividend payouts by large banks and the associated decline in capital buffers might leave those banks with less capacity to weather adverse shocks,” according to minutes of the meeting.

Banking regulators have also been working to relax the Volcker Rule, which prohibited banks from making risky bets with their customers’ deposits. Banks took major losses on their derivatives holdings in the 2008 crisis, helping to exacerbate financial system strains. Proposed changes would allow banks to invest in some credit funds and sponsor or take ownership stakes in venture capital funds, which pool ultrarich investors’ money to bet on start-ups.

“We are in a much more fragile situation than we should be because the regulators haven’t been on the job,” said Marcus Stanley, policy director for Americans for Financial Reform. “This is a real economic crisis we’re facing.”

Mr. Stanley noted that bank capital has been steadily declining during Mr. Trump’s time in office while corporate debt has been piling up. That combination, he said, could turn out to be a “recession accelerator” if companies experience sharp revenue declines and are forced to lay off workers.

Senator Sherrod Brown of Ohio, the top Democrat on the Senate Banking Committee, warned in a letter to Treasury Secretary Steven Mnuchin last week that the country faced a potential “economic calamity” and called on Mr. Mnuchin to work with the Financial Stability Oversight Council, which he chairs, to come up with a plan.

“I am concerned that you and your fellow regulators on the council have repeatedly failed to take action to make the financial system more resilient, putting our economy at risk as we experience the first period of financial stress under your watch,” Mr. Brown wrote.

Mr. Mnuchin has been criticized by Democrats and consumer advocates for weakening critical safeguards put in place to prevent a repeat of 2008, when regulators were largely caught off-guard by the severity of losses at financial firms, including those outside the banking sector.

Congress created the Financial Stability Oversight Council to identify risks to the financial system and respond to emerging threats by strengthening oversight of vulnerable areas. Under the Obama administration, the council determined that four large non-bank companies, including American International Group, were “systemically important,” meaning those firms would be subject to Fed oversight.

Under Mr. Mnuchin’s leadership, the council has released those firms from federal oversight and abandoned efforts to designate any other firm as “systemic.” It has opted instead to assess whether any financial “activities” pose risks to the system. None have been identified.

And the Office of Financial Research, an independent agency created in 2010 to serve as an early warning system for emerging risks, has been gutted and marginalized over the past three years, with Mr. Mnuchin recommending that the agency become a “functional part of Treasury,” with its director chosen by the Treasury secretary, rather than the president.

The agency’s has been slashed by more than 50 percent since 2017 to 96 employees and its role has been relegated to largely assisting the Financial Stability Oversight Council, rather than collecting and analyzing data to identify emerging economic threats across financial sectors, according to current and former officials.

“Once Trump took office, every day they have been finding ways to deregulate and weaken the financial regulatory structure,” Mr. Brown said in an interview. “They clearly are not prepared for a financial crisis, no matter what precipitates it.”

At a House Financial Services hearing last year, Representative Maxine Waters, a California Democrat, pressed Mr. Mnuchin about deep cuts to the staff and budget of the Financial Stability Oversight Council and the gutting of the Office of Financial Research. Mr. Mnuchin suggested that the moves were made in the name of greater efficiency.

Mr. Mnuchin attempted to calm markets at a congressional hearing last week by arguing that this would not be 2008 all over again and that any economic slowdown caused by the virus would quickly abate.

“This is very different than the financial crisis,” Mr. Mnuchin said. “There will be an end in sight.”

Bank lobbyists have seized on the coronavirus as a reason to usher in even more deregulation.

The Bank Policy Institute published a memorandum earlier this month suggesting several measures that regulators could take to help financial institutions expand lending during trying times — including implementing the streamlined capital rules, which the Fed did just days later.

“In their eyes, when the economy is booming it’s as good a time to deregulate as when they economy is experiencing some stress,” Mr. Gelzinis said. “It’s always a good time to roll back rules on Wall Street.”