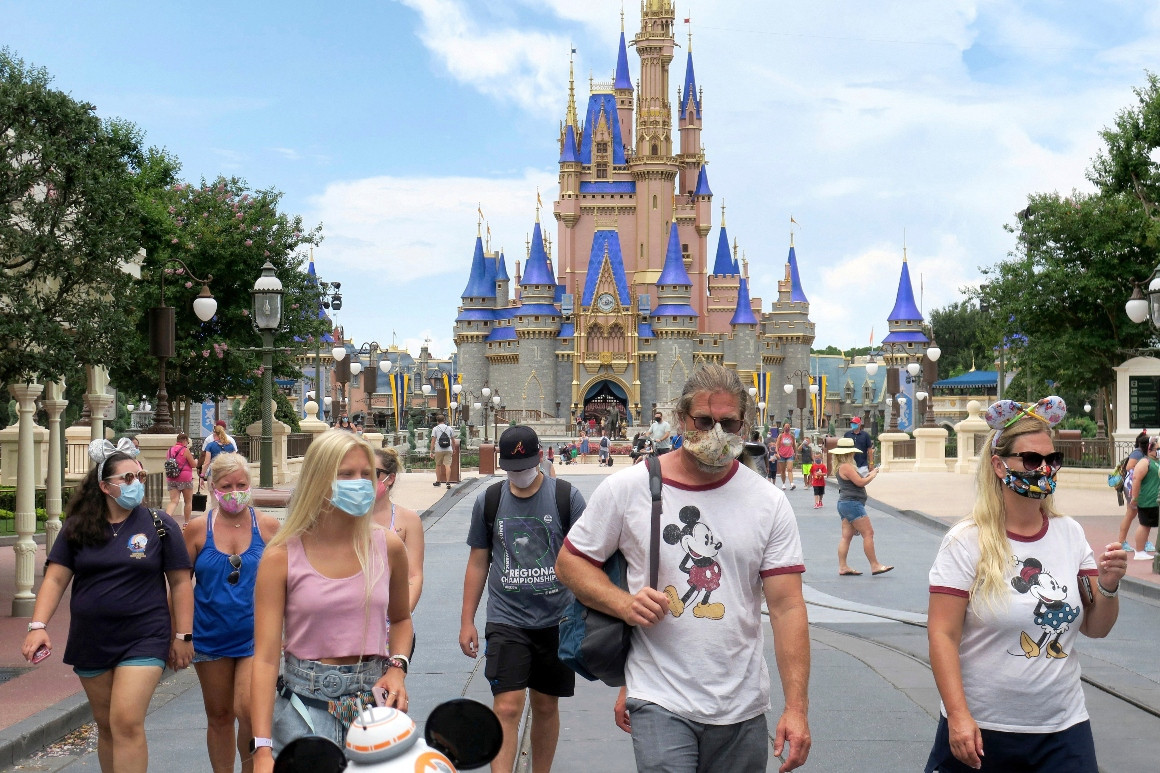 Guests wear masks as required to attend the official reopening day of the Magic Kingdom at Walt Disney World on July 11. | Joe Burbank/Orlando Sentinel via AP

Florida on Sunday reported more than 15,000 new coronavirus cases, smashing the daily record reported by any single state and once again putting an international spotlight on a place that does not have the virus under control.

The eye-popping topline figure does come with some caveats.

The Florida Department of Health received 135,992 results from people who have never been tested before, and 15,299 of those tests came back positive for Covid-19. The positivity rate of new infections was 11.25 percent, which is at least a two-week low and down significantly since the state’s record high of 18 percent reported on Wednesday. Still, public health experts express concern about positivity rates over 10 percent, a number Florida has not dipped below since June 23.

In responding to the new numbers, Gov. Ron DeSantis’ administration has continued its messaging strategy of putting them in a positive light, an approach that has increasingly drawn criticism as Florida has emerged as one of the biggest virus hot spots in the world.

“Florida COVID positive cases decline for a third day in a row to 11.25% despite a record 142,981 tests results returned in a single day,” tweeted DeSantis’ communications director, Helen Aguirre Ferré, using a figure that includes those who have been tested multiple times. “Average age of those testing positive also decreased: 38 years old.”

DeSantis has routinely turned to the median age of new positive cases to downplay the recent spike because, his administration says, younger people often show fewer symptoms and rarely require hospitalization, which means less of a strain on the state’s health care infrastructure. Left unacknowledged, however, is an increasing toll on state hospitals, especially those in South Florida, which is seeing the state’s biggest surge in new cases.

On Friday for the first time, the DeSantis administration released current hospitalization numbers, which showed 6,974 patients hospitalized with coronavirus as their primary diagnosis, a number that jumped to 7,507 on Sunday. For months, the administration refused to disclose the information, but relented after continued pressure by the Miami Herald and other media outlets.

DeSantis has cast the falling median age of those contracting the disease as a positive, but public health experts note that the spread in younger populations increases the likelihood of people in at-risk populations, like seniors, getting sick. There are also negative impacts on younger people who get sick, even if they don’t land in the hospital.

Ferré drew heat on Friday after using 93 new deaths in a tweet in an attempt to signal optimism about that day’s numbers. The death count was down from a record 120 the previous day, but her response was still seen as callous by many for using nearly 100 dead Floridians as positive messaging.

“The fact that the governor’s office seems to think that 93 dead Floridians is an accomplishment is heartless and disturbing,” Kayser Enneking, an anesthesiologist and Democrat running for a Gainesville-area Florida House seat, tweeted in response. “Also, a 12.75% positivity rate means we still have uncontrolled community spread.”

The increased daily case counts and continued double-digit positivity rate comes as the issue of reopening Florida’s schools becomes the newest politicized coronavirus battlefield. Education Commissioner Richard Corcoran, a DeSantis appointee and former Republican speaker of the Florida House, issued an order last week telling school districts they must open classrooms for five days a week beginning next month. Corcoran must approve a district’s reopening plan before they can get their cut of state funding.

The demand to reopen the state’s schools coincided almost to the day with President Donald Trump’s beginning a forceful push to get the nation’s schools back open, an effort the administration is making as Trump’s poll numbers slump less than four months ahead of Election Day.

“But the key is,” Education Secretary Betsy DeVos told Fox News on Sunday, “there has to be a posture of doing something, of action, of getting things going, putting a plan together for your specific school, for your specific district or for your classroom that ensures that kids are going to start learning against this fall.”

This article tagged under: