WASHINGTON — Congress had a clear idea of the role it expected inspectors general to play when it created them in 1978 after the Watergate scandals. They were to be dispersed in the agencies and departments of the federal government not as compliant team members but in-house referees, charged with rooting out corruption, waste, malfeasance and illegality.

As their numbers increased in the four decades since, inspectors general have played that role in bureaucracies as vast as the Pentagon and as tiny as the Denali Commission, charged with developing infrastructure in Alaska. It was an inspector general who in 2003 discovered that the C.I.A. was using unauthorized techniques to torture detainees and an inspector general who brought to light billions of dollars wasted in reconstruction projects in Afghanistan.

But President Trump has made clear that he has little use for this kind of independent oversight, which he sees as yet another form of resistance from the so-called Deep State. “I think we’ve been treated very unfairly by inspector generals,” he said this week.

And now he has launched a full-fledged — and at moments quite innovative — attack on the ability of inspectors general to investigate his administration.

Mr. Trump’s effort began last month with a sudden flurry of Friday-night firings and demotions. It has escalated with an attempt to bypass legal requirements that he give reasons to Congress 30 days before removing an inspector general. He has forged new ground by replacing them with political appointees who hold on to their old jobs, keeping them under the control of the cabinet secretaries they are supposed to be policing.

The president’s moves have hardly been subtle. When Steve A. Linick, the State Department’s inspector general, was fired last Friday, he was immediately locked out of his office and his email. His replacement is an associate of Vice President Mike Pence’s and remains in a politically appointed post that is subordinate to Secretary of State Mike Pompeo, who complained this week that Mr. Linick was not willing to live up to the secretary’s slogan, “one team, one mission.”

The message to the 74 inspectors general scattered around the government was unmistakable: If they unearth damaging information, especially in these crucial months before a presidential election, they are inviting retaliation.

“Trump is replacing independent inspectors general with unqualified political allies, which is inconsistent with statutory requirements,” said Kathleen Clark, a law professor at Washington University in St. Louis who has written about the watchdog system. “The bottom line is he is removing independent officials who protect the public and help ensure the law is followed.” 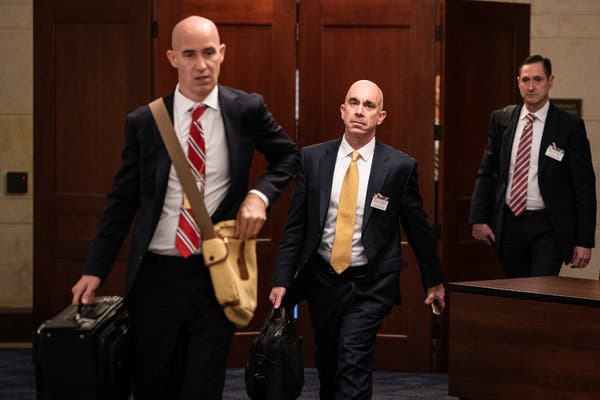 Steve A. Linick in 2019. He was fired last week as the State Department’s inspector general.Credit…Erin Schaff/The New York Times

When President Jimmy Carter signed the 1978 law creating the inspectors general system, few imagined a president so determined to undercut it. Mr. Carter hailed the “harmony and the partnership being established between the executive and legislative branch of government to root out fraud and corruption and mismanagement.”

President Ronald Reagan replaced all Carter-appointed inspectors general when he took over in 1981, but he later rehired some of them and, since then, the tradition has held that they remain in place when a new president takes office, a sign of respect for their nonpartisan status. Presidents may remove them, but Congress required an explanation of the reasons and, in 2008, put in an additional safeguard by imposing a 30-day waiting period.

Mr. Trump, who likes to brag that he has total authority over the executive branch, has shown that he has no intention of playing by those rules. In removing Mr. Linick, for example, the president immediately stripped him of authority and told Congress he no longer had full confidence in him, but did not say why.

Mr. Trump later told reporters that he did so only because Mr. Pompeo asked him to.

“I’ve said, ‘Who appointed him,’ and they said, ‘President Obama,’” the president said. “I said, look, ‘I’ll terminate him.’ I was happy to do it,” Mr. Trump later said. Mr. Pompeo added on Wednesday that he “should have done it some time ago.”

A replacement was announced immediately: Stephen J. Akard, who also will keep his current political appointment, subordinate to Mr. Pompeo, as director of the State Department’s Office of Foreign Missions.

Among other things, Mr. Linick had been investigating whether Mr. Pompeo and his wife, Susan Pompeo, inappropriately used a taxpayer-paid government employee to run personal errands, and whether Mr. Pompeo acted legally last year when he circumvented Congress on selling arms to Saudi Arabia and the United Arab Emirates.

This week, Mr. Pompeo denied that he knew about what Mr. Linick was investigating other than the arms deal and said it was “patently false” that he asked Mr. Trump to fire him as retaliation. But he also refused to say what his reason was.

Secretary of State Mike Pompeo in April. He complained this week that Mr. Linick was not willing to live up to the secretary’s slogan, “one team, one mission.”Credit…Pool photo by Andrew Harnik

At the same time Mr. Trump removed Mr. Linick, he abruptly installed Howard “Skip” Elliott, a political appointee inside the Transportation Department, to serve as the acting inspector general for that department.

Mr. Elliott replaced Mitch Behm, the deputy inspector general who had been leading the office since its longtime head, Calvin L. Scovel III, retired in January for health reasons. It put Mr. Elliott, who remains subordinate to the transportation secretary, Elaine Chao, in control of investigations into her work — including an inquiry into whether the department has shown favoritism in steering taxpayer grants to Kentucky, where Ms. Chao’s husband, Senator Mitch McConnell, a Republican and the majority leader, is running for re-election.

In a letter this week to Mr. Trump, Senator Charles E. Grassley, Republican of Iowa and a supporter of the inspectors general system, objected to “obvious conflicts of interest” created by Mr. Trump’s installation of current political appointees to control watchdog offices, saying the problems went beyond independence.

“It means that while still reporting to the agency secretary, they will have oversight of and access to all confidential inspector general information, including whistle-blower complaints and identities,” he wrote.

Mr. Grassley has also been pushing the president to provide a more detailed official explanation to Congress for his ouster last month of Michael K. Atkinson, the inspector general of the office of the director of national intelligence. As with Mr. Linick, Mr. Trump had put Mr. Atkinson on leave rather than waiting 30 days, and told Congress only that he had lost confidence in him.

But in remarks to reporters, the president clearly remained angry at Mr. Atkinson for trying to alert Congress to the whistle-blower complaint about Mr. Trump’s attempt to pressure Ukraine’s leader into announcing a criminal investigation into former Vice President Joseph R. Biden Jr. and his son Hunter Biden.

There is some precedent for one of Mr. Trump’s tactics: In 2009, President Barack Obama abruptly ousted Gerald Walpin, the inspector general of the Corporation for National and Community Service, and also put him on leave and initially told Congress only that he had lost confidence in the official.

But while administrations of both parties have periodically clashed with inspectors general, Mr. Trump’s campaign to intimidate and subjugate watchdogs to political control is without parallel.

In late March, after the president signed a $2 trillion coronavirus relief bill, he issued a signing statement claiming a right to override a key safeguard: its creation of an inspector general empowered to police $500 billion in corporate bailout funds. It required the inspector to tell Congress if Treasury Department officials balked at providing information on how the money was spent.

In the statement, Mr. Trump said he alone determined what information lawmakers got. And on April 3, he announced his intent to nominate Brian D. Miller, his own White House aide, for the position, leading critics to charge that he was too close to the White House to provide aggressive and independent oversight.

Michael K. Atkinson was removed last month as the inspector general of the office of the director of national intelligence.Credit…Erin Schaff/The New York Times

On April 6, Mr. Trump ripped into the acting inspector general for the Department of Health and Human Services, Christi A. Grimm, after she issued a report on equipment shortages at hospitals. He accused Ms. Grimm of being politically biased against him. Three weeks later, he nominated a potential replacement, although she remains in place while that nomination is pending.

On April 7, Mr. Trump demoted Glenn A. Fine as the longtime acting inspector general for the Defense Department. The move disqualified Mr. Fine, who has a reputation for aggressiveness and independence, from continuing to serve as the just-named leader of a committee of inspectors general that Congress created to coordinate oversight of the administration’s spending of trillions of taxpayer dollars related to the pandemic.

Mr. Trump also replaced Mr. Fine as the acting Pentagon watchdog with Sean O’Donnell, the sitting inspector general of the Environmental Protection Agency who had clashed with Andrew Wheeler, the head of the E.P.A. By requiring Mr. O’Donnell to split his time, critics said, the administration undercut his ability to perform oversight at both agencies.

“It’s impossible to do them both,” said David C. Williams, who served as inspector general of six federal agencies over the course of a government career that spanned from the Carter administration to the Trump administration.

“If you are supposed to take direction from the secretary who is your boss, and also to have professional skepticism of their job performance, it’s hard to reconcile those two roles,” said Andrew M. Wright, a former ethics and oversight lawyer for Congress and in the Obama White House. “You risk being under direct control by political appointees in a way that is not contemplated by the inspector general statute, and unable to have the institutional distance to be able to scrutinize political appointees’ work.”