WASHINGTON — Retired senior military leaders condemned their successors in the Trump administration for ordering active-duty units on Monday to rout those peacefully protesting police violence near the White House.

As military helicopters flew low over the nation’s capital and National Guard units moved into many cities, Defense Secretary Mark T. Esper and General Mark A. Milley, the chairman of the Joint Chiefs of Staff, stood beside President Trump as he took the unusual step of pressing the American military into a domestic confrontation.

Gen. Martin E. Dempsey, a former chairman of the Joint Chiefs of Staff, wrote on Twitter that “America is not a battleground. Our fellow citizens are not the enemy.”

And Gen. Tony Thomas, the former head of the Special Operations Command, tweeted: “The ‘battle space’ of America??? Not what America needs to hear … ever, unless we are invaded by an adversary or experience a constitutional failure … ie a Civil War.”

For the past three years, American military officials have expressed private concerns that Mr. Trump does not understand either his role as commander in chief or the role of the military that is sworn to protect the Constitution from all enemies.

Television networks broadcast images of General Milley, in combat fatigues, and Mr. Esper, in a suit — walking behind Mr. Trump as he crossed Lafayette Square Monday evening to a photo opportunity in front of St. John’s church. Earlier in the day, Mr. Esper joined the president’s call with governors and said, “We need to dominate the battlespace” — a comment that set off a torrent of criticism.

More than 40 percent of the two million active-duty and reserve personnel are people of color, and orders to confront protesters demonstrating against a criminal justice system that targets black men troubled many.

The Air Force’s top enlisted airman took to Twitter to express his anger.

“Just like most of the Black Airmen and so many others in our ranks … I am outraged at watching another Black man die on television before our very eyes,” Kaleth O. Wright, the chief master sergeant of the Air Force, said in a Twitter thread, citing the names of black men who died in police custody or in police shootings. “I am George Floyd … I am Philando Castile, I am Michael Brown, I am Alton Sterling, I am Tamir Rice.”

The Pentagon has yet to say how many soldiers it is deploying to Washington, per Mr. Trump’s order. Defense Department officials have given varying numbers, from 500 to “thousands.”

One Pentagon official said that the troops deploying to the capital might not be limited to the military police. The official, who said that decisions were still being made, added that the troops were coming from Ft. Bragg in North Carolina, Ft. Drum in New York and might also, surprisingly, include the so-called Old Guard ceremonial unit. The Old Guard provides security for Washington and escort to the president.

The deployment of active-duty troops to confront protesters and looters prompted one military official to liken the order to Mr. Trump requesting his own “palace guard.”

This week, Mr. Trump said, without elaborating, that General Milley was in charge of the effort to confront the protesters and looters.

At the Pentagon, officials expressed surprise at the president’s comments, and referred questions to the White House. But officials noted that all National Guard members now deployed in the United States are under the authorities of the state governors. Defense Department officials said that if those troops are federalized — that is, put under the power of the president rather than governors — that would normally be done under the auspices of United States Northern Command, which oversees military units on American territory, and not the office of the chairman of the Joint Chiefs of staff.

In his current role, General Milley does not command troops; he serves as the top military adviser to the president and the defense secretary. It would be very unusual for a chairman of the Joint Chiefs to take control over missions in the country, Defense Department officials said. 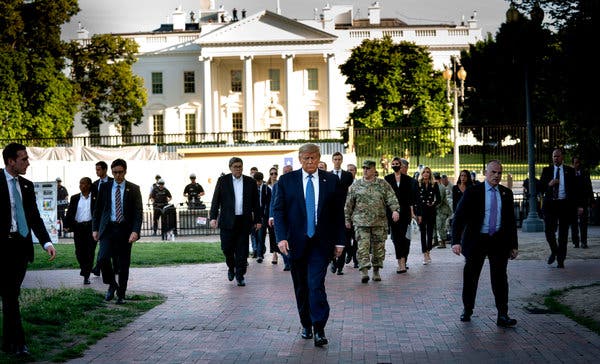 President Trump, along with Gen. Mark A. Milley, the chairman of the Joint Chiefs of Staff, and other top administration officials walking to St. John’s church on Monday.Credit…Doug Mills/The New York Times

As soldiers arrived on Monday, clad in camouflage uniforms and clutching riot shields labeled “military police” to reinforce the line of crowd control officers guarding Lafayette Square yards from the White House, the crowd of about 400 protesters responded with verbal taunts. “Fascists!” some yelled. Others booed. A few shouted expletives.

As the hours stretched on, a pair of armored Humvees from the 273rd Military Police Company, painted tan for their once inevitable deployments to the Middle East, sat idling in an intersection near a Metro stop. Protesters snapped pictures in front of them. Others quietly walked by shaking their heads.

Around 10 p.m., the military stepped up its attempts to suppress the protesters. A crowd making its way through the Chinatown area of Washington had gone relatively unbothered by law enforcement, having snaked across town, blocking roads and chanting “We can’t Breathe,” “George Floyd” and “Hands up, don’t shoot.” The group, for the most part, was peaceful.

A Black Hawk helicopter, followed by a smaller medical evacuation helicopter, dropped to rooftop level with their search lights aimed at the crowd. Tree limbs snapped, nearly hitting several people. Signs were torn from the sides of buildings. Some protesters looked up, while others ran into doorways. The downward force of air from the rotors was deafening.

The helicopters were performing a “show of force” — a standard tactic used by military aircraft in combat zones to scatter insurgents. The maneuvers were personally directed by the highest echelons of the Washington National Guard, according to a military official with direct knowledge of the situation. The Guard did not respond to a request for comment.

Parts of the crowd dispersed before continuing on. The helicopters circled for another pass. Afterward, protesters were no longer cursing only the police, the focus of unrest from the start, but the military, too.

The deployment is also challenging for National Guard units, who are inheritors of a legacy from the Revolutionary War militia, the citizen-soldiers who were ready to put down their plows and pick up weapons to defend their country. Today, when the National Guard can be dispatched for an array of missions — like combat duty in Iraq or Afghanistan, helping with flood relief or providing assistance to coronavirus victims — that balance is more complicated.

Members of the Guard generally report to the governor of their state, but when units come under the command of the president, federal law prohibits them from being used domestically except under some very limited circumstances.

In the current unrest, military personnel specialists say, the Guard is caught between expressing anguish over the killing of a black man, George Floyd in Minneapolis, and supporting civilian authorities in quelling the violent protests and looting that followed.

“Most of the soldiers will have sympathy for the peaceful protesters and be angry about Floyd’s death, but they’re probably angry at the violence as well,” said Peter D. Feaver, a professor of political science at Duke University who has studied the military for decades. “It puts them in a fraught position.”