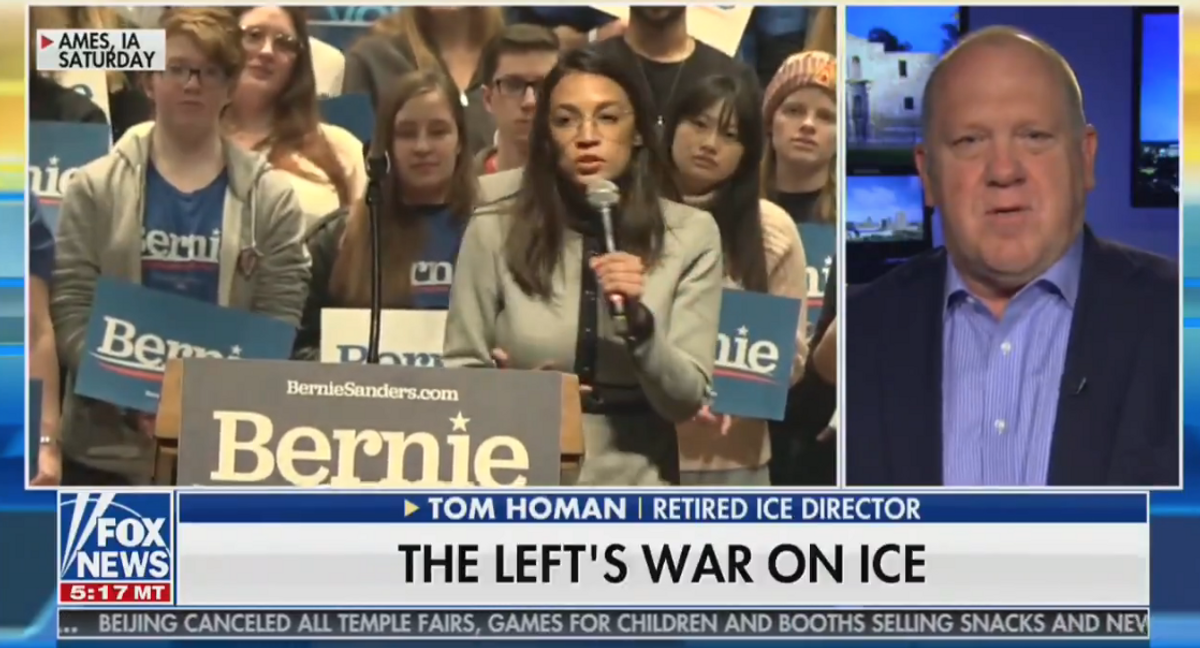 Former acting Director of U.S. Immigration and Customs Enforcement Tom Homan went on a tirade against Rep. Alexandria Ocasio-Cortez (D-N.Y.) after she instructed audience members to tip people off about upcoming federal immigration raids in their communities over the weekend.

“Organizing is about tipping people off if you start to see that ICE and [Customs Border Patrol] are in communities, to try to keep people safe,” she said while speaking at a Bernie Sanders campaign rally in Iowa. “I’m here because Sen. Sanders has actually committed to breaking up ICE and CBP.”

Making a guest appearance Sunday on Fox News, Homan responded by excoriating Ocasio-Cortez for her “ridiculous” and “extremely stupid” remarks.

“But here’s an elected lawmaker, she’s a congresswoman standing on a stage telling people how to obstruct ICE, tipping off people ICE is looking. And she needs to realize that nine out of 10 of everybody ICE arrested last year was a convicted criminal or pending criminal charges,” Homan added. “Last year, 137,000 criminals, 2,000 were murderers, 12,000 sex offenses, 45,000 assaults, 62,000 drug offenses, 10,000 weapons offenses, and she wants the community to tip these people if ICE is in their neighborhood operating.”

But he wasn’t finished yet. Homan appeared again on Fox News on Monday to offer reaction to Ocasio-Cortez’s comments.

“It’s an incredibly stupid statement she made, which doesn’t surprise me because she’s about as far from smart as anybody could possibly be,” Homan continued. “But what she said is dangerous. These men and women put their lives on the line every day to arrest criminals off the streets, especially in New York.”

Homan also wondered why her statements have not landed her before the House Ethics Committee for attempting to obstruct the federal agency.

“It’s a dangerous statement, it’s idiotic, and I just can’t believe that she can stand up on stage and make a statement like that and not have any repercussions from the House Ethics Committee,” he said.

“She’s standing on stage and telling people to give a heads up that the good guys are going to be arresting the bad guys in your neighborhood … that’s obstruction, that’s a crime,” he added. “She’s disgusting, something needs to be done about it.”

Ocasio-Cortez has been vocal in her opposition to ICE since the launch of her congressional campaign in 2018, and has been a leader of the movement to abolish the federal immigration agency.

This is also not the first time Homan and Ocasio-Cortez have sparred over immigration enforcement policies.

In September of last year, while giving testimony before the House Oversight Committee, Homan berated Ocasio-Cortez for advocating for ICE to be abolished.

“In my 34 years I have never seen such hate toward law enforcement agency in my life that you want to abolish them rather than do your job and legislate,” he said to Ocasio-Cortez. “If you don’t like it, legislate!” he then shouted.