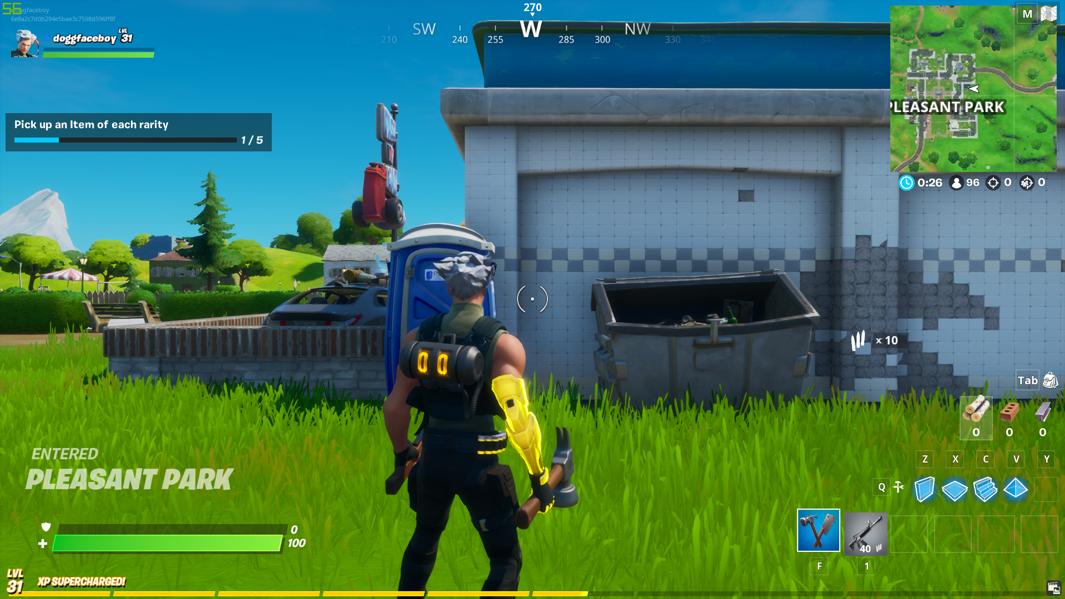 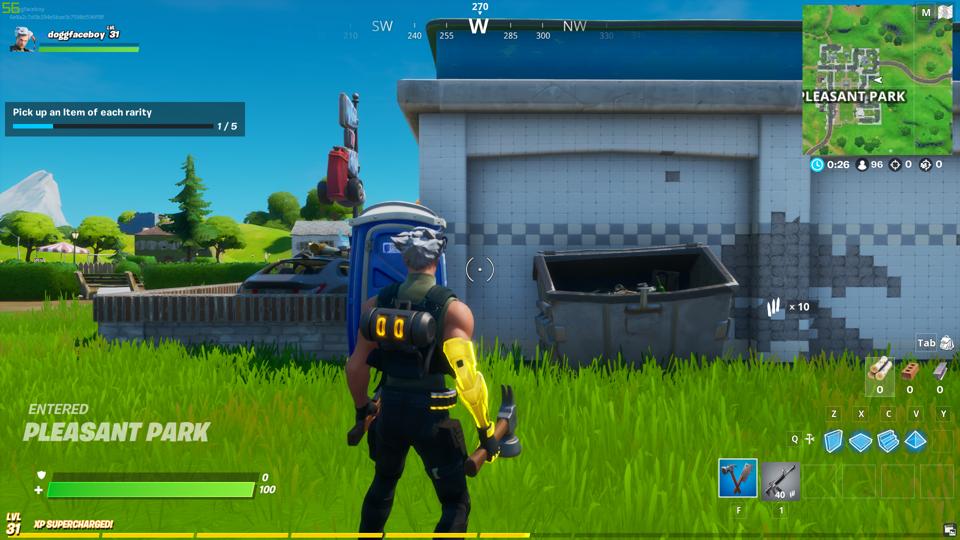 Here are all the SHADOW Safe House locations in ‘Fortnite’ for the week 2 Brutus’ Briefing … [+] challenge.

It’s good to have Fortnite alive and kicking again. Chapter 2, Season 2 has been a nice change of pace, replete with a secret agent theme, some James Bond style music, and AI henchman to keep things interesting.

Last week we had the first batch of Brutus’ Briefing challenges, and this week we have the second half of those challenges. Completing all of them will unlock the ability to select one of two skin styles for the Battle Pass character, Brutus—either Ghost or Shadow.

I’m partial to the Shadow style so that’s the one I’ll choose after I complete the rest of these challenges. 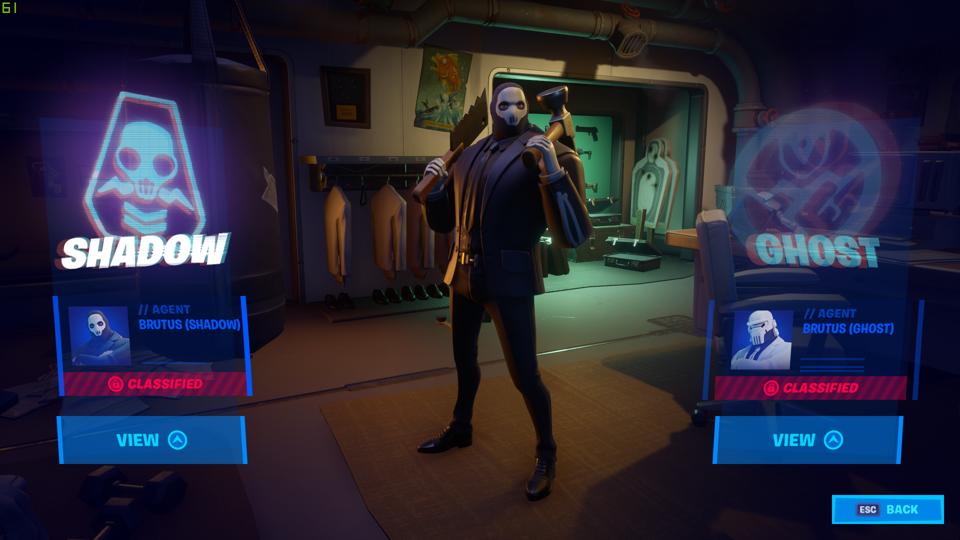 The Shadow style for Brutus in Fortnite.

In this second batch of challenges for Chapter 2, Season 2, Week 2 (that’s a mouthful) players are tasked with visiting 5 Shadow Safe Houses. Shadow is one of the two rival secret agent cartels now vying for power in Fortnite’s universe and there are various Ghost and Shadow bases and hideouts scattered across the map.

There are a total of five Shadow Safe Houses on the map (that I’m aware of) and unlike past seasons where this kind of thing was a very obvious structure—AIM bases or EGO outposts or what have you—these Safe Houses are disguised (mostly) as normal buildings. But once you’re in, you find yourself in secret bases with henchman bots ready to gun you down.

These bots are no joke, either. Before you go into one of these Shadow Safe Houses, gear up. Make sure you have weapons, shields, healing items and so forth. Because the moment you get into one of these buildings you’ll be under fire.

Last week we were tasked with disguising ourselves in Phone Booths, basically becoming copies of the Henchman that patrol the new Named Locations, hideouts and a few other spots on the map. I’m not sure if any of these exist in the Safe Houses, however, so you’ll need to be sneaky. Here’s where each Shadow Safe House is located on the map: 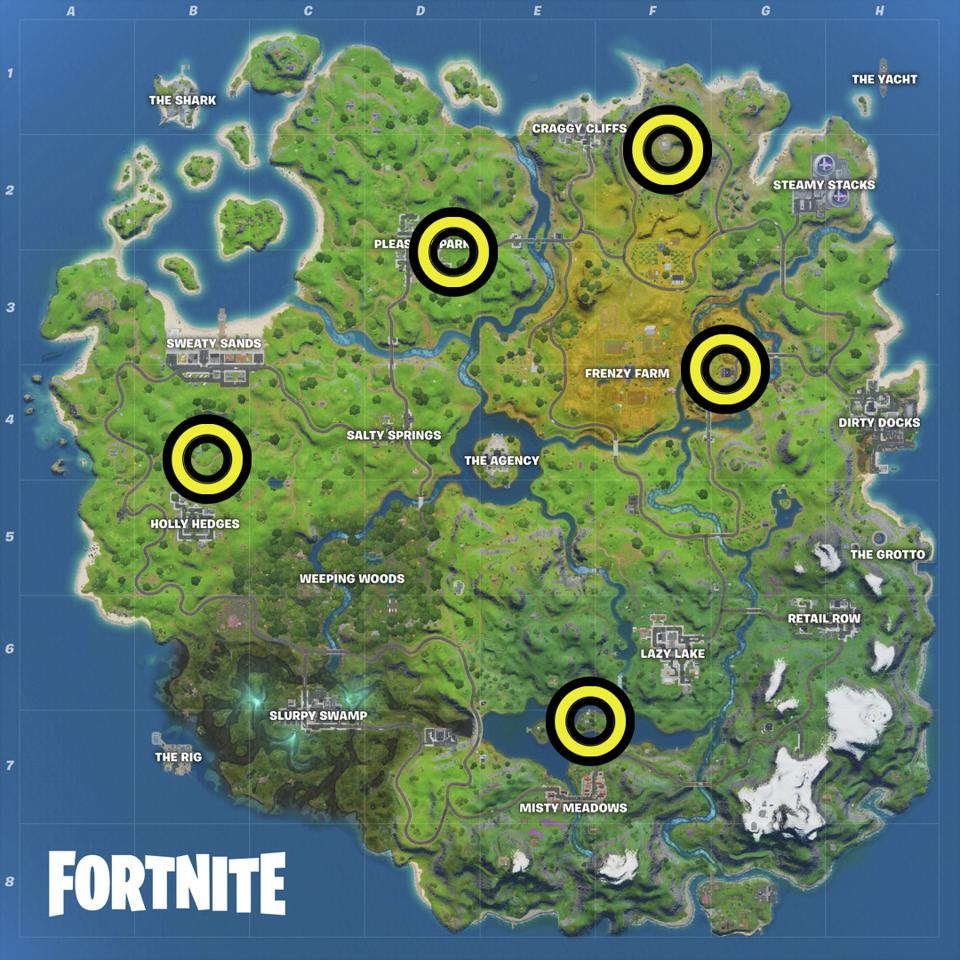 Each of these Shadow Safe Houses looks different. Let’s take a look at each one so you know what to expect.

The Safe House pictured at the top of this post is located on the eastern side of Pleasant Park. To get into it go to the gas station there and enter the porta-potty out back. This appears to be the only way to access this Safe House. You’ll be transported into a secret base where AI Henchmen will immediately open fire. As Scar likes to say, be prepared. 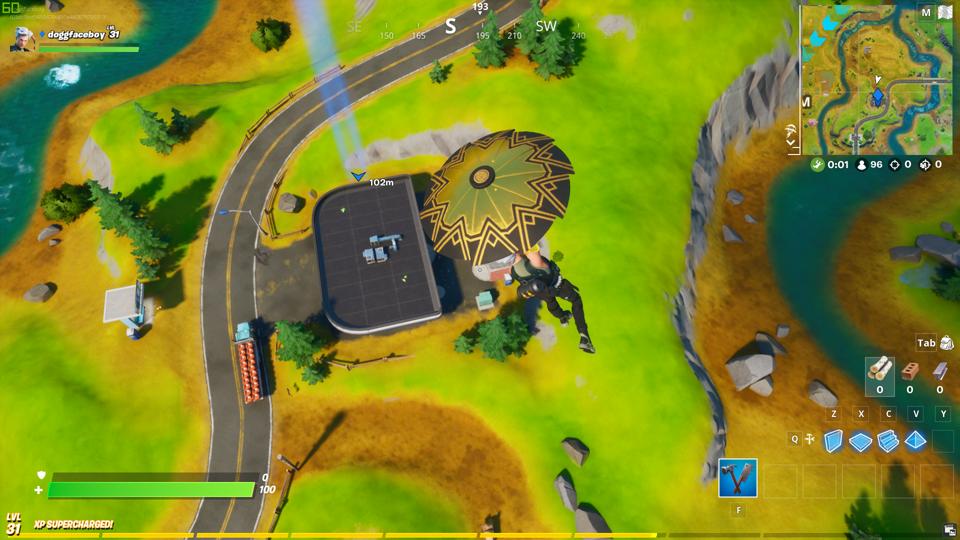 The second Shadow Safe House is located just east of Frenzy Farm. Once again, it’s a gas station. Go to the brick building behind the gas station and hop into the porta-potty, which will transport you into the hidden base. Be ready for a fight. 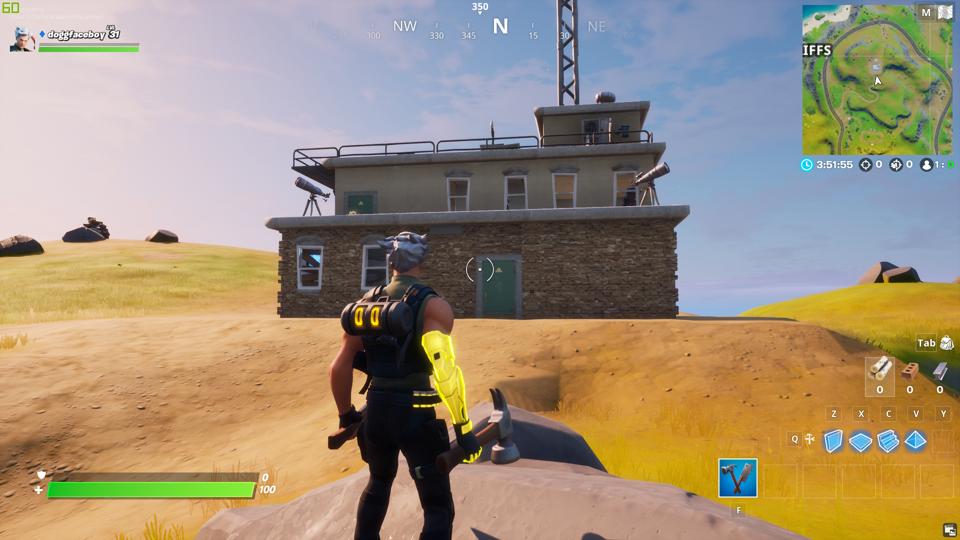 Bucking the trend of gas stations and unassuming buildings, the third Shadow Safe House location is this rather plain looking building near Craggy Cliffs. Some of these have telescopes and all of them have Upgrade Stations. 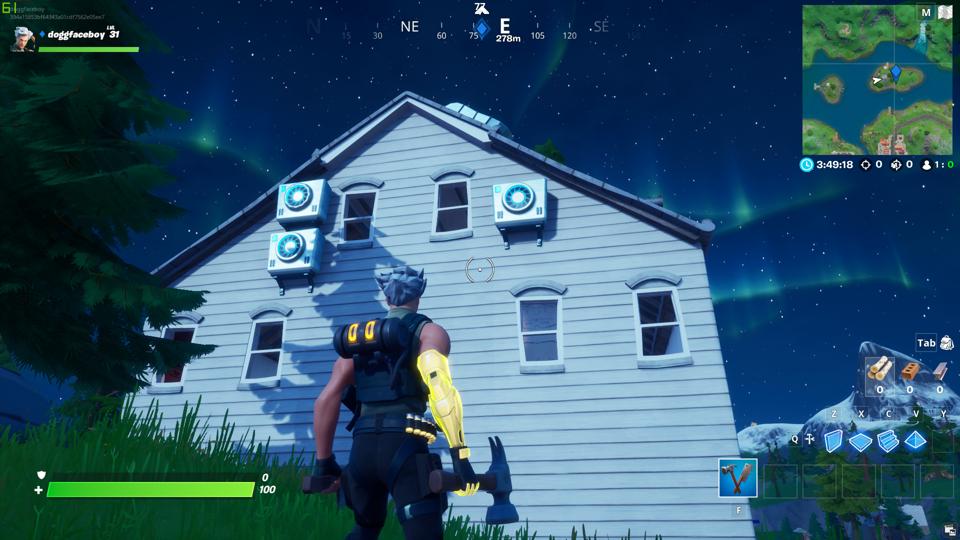 This Shadow Safe House is located on the big island just north of Misty Meadows. It’s a big house and rather plain. Henchman patrol the island so be on the lookout. 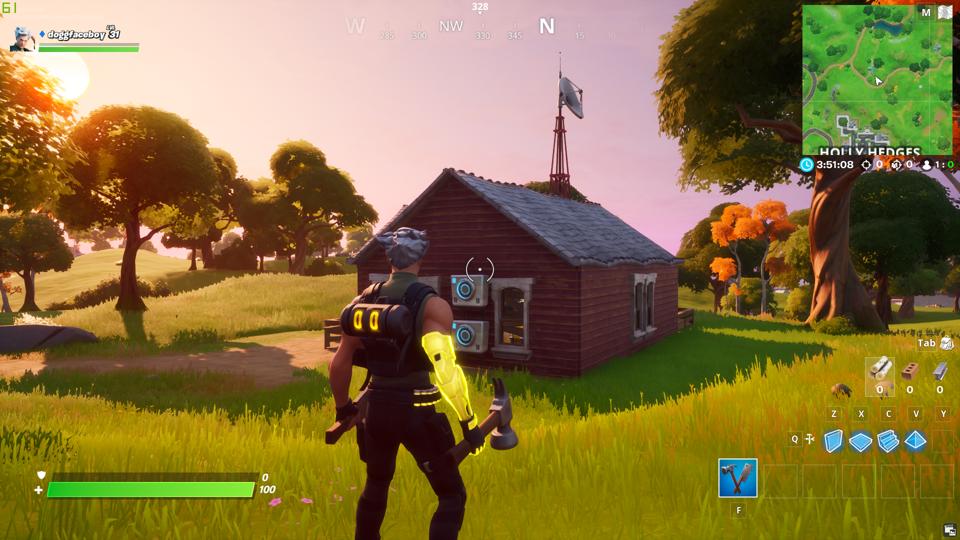 Finally, this last Shadow Safe House is located south of Sweaty Sands and north of Holly Hedges, almost directly between the two. It’s a particularly unassuming little house, though you’ll notice the blue-colored fan boxes on the outside, similar to the ones in the previous Safe House. Maybe these are generators? Either way, once you enter you’ll find yourself in a room that looks like this: 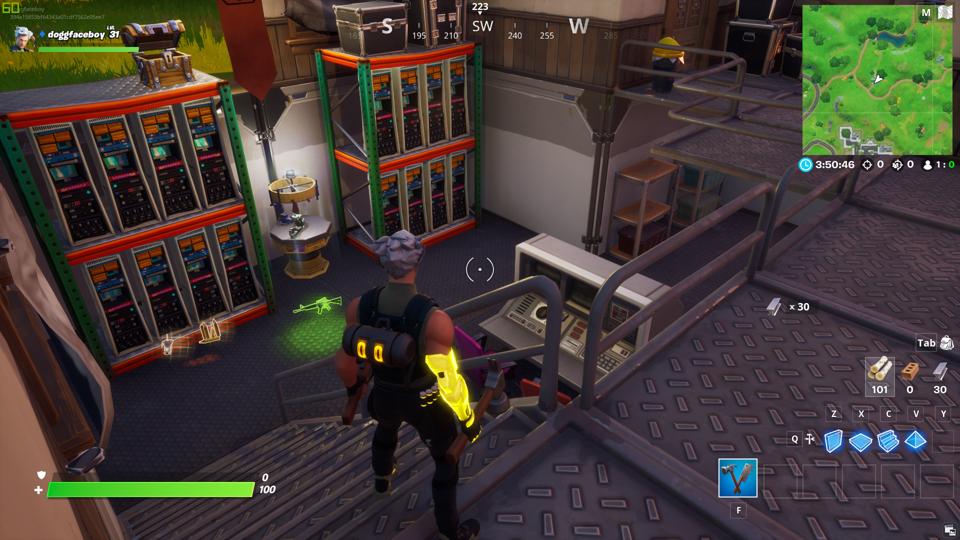 I believe these are all of the locations but if you find another one please let me know on Twitter, Facebook or Instagram (and I’d love it if you followed me on any of those!)

I did find a Ghost House near Weeping Woods but I’m pretty sure that doesn’t qualify as a Shadow Safe House. Filthy Ghosts! Go Team Shadow!

I have high hopes for this season as it’s already way more fun and interesting than Season 1. But Epic dropped the ball pretty spectacularly last season so who knows? Whatever the case, have fun with this week’s challenges!

I’ll leave you with some music. Happy hunting secret agents!