Fox News anchor Chris Wallace pressed Surgeon General Jerome Adams to explain why the administration of President Donald Trump has not put forward a national stay-at-home order to curb the spread of the novel coronavirus, despite the advice of many health experts.

Wallace interviewed Adams on his weekly show Fox News Sunday, pointing out that even Dr. Anthony Fauci–the director of the National Institute of Allergy and Infectious Diseases who is a key figure of Trump’s Coronavirus Task Force–has expressed support for a national lockdown. But Trump has insisted that governors should decide whether or not to give such an order within their own states.

“Dr. Adams, the coronavirus is not a state issue. It doesn’t follow or respect state borders. Dr. Fauci says he believes that there should be a national stay-at-home order,” Wallace pointed out. “Is he wrong?” he asked.

Adams noted that “most” people are “doing the right thing” nationwide, saying that “over 90 percent of the country is staying at home.” He said that many people were even staying home in the few states that have not implemented lockdowns. The surgeon general then compared the coronavirus to the opioid epidemic and smoking. He argued that states generally handle those issues differently, pointing out that more people will die from smoking than coronavirus.

“But Dr. Adams, there’s a big difference between opioids and cigarettes, which are something that people decide to use or not to use, and the coronavirus, which people catch,” the Fox News host responded “It’s not an individual choice,” he said.

“You know, when President Trump says he’s a wartime president, during World War II FDR [former President Franklin D. Roosevelt] didn’t say: ‘Well, it’s up to each state to decide what to do.’ He mobilized the nation,” Wallace said.

“Again, why not a national stay at home order?” he asked. “The coronavirus doesn’t recognize states’ rights. So does the federal analogy really work here?”

Adams responded by saying that governors are “intensely protective of their right, and rightly so, to be able to decide what’s best for their states.” The surgeon general explained that he and other scientists and medical professionals would “do everything we can” to help governors and states understand the right thing to do.

As Wallace noted, Fauci said last Thursday that there should be a national lockdown to adequately curb the spread of the coronavirus.

“The tension between ‘federal mandated’ versus ‘states’ rights’ to do what they want is something that I don’t want to get into,” the public health official said in a CNN interview. “But if you look at what’s going on in this country, I just don’t understand why we’re not doing that. We really should be.” 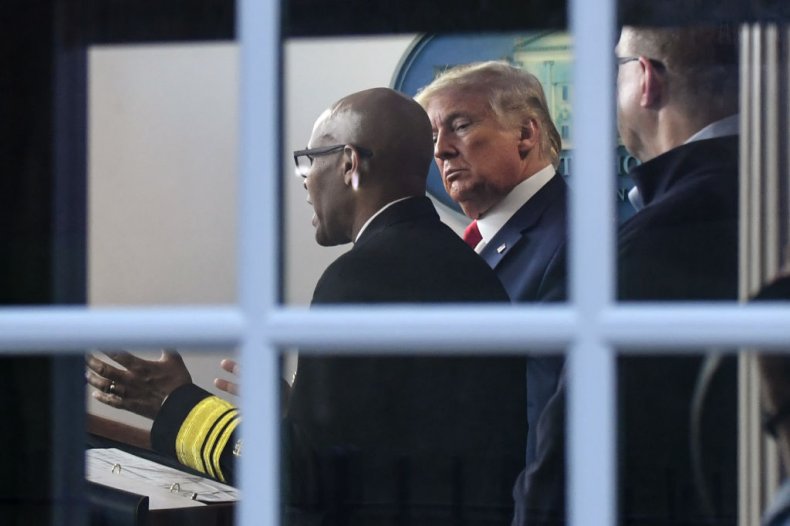 President Donald Trump listens as Surgeon General Jerome Adams speaks during the daily briefing on the novel coronavirus at the White House on March 22 in Washington, D.C. ERIC BARADAT/AFP/Getty

Most states have already implemented varying stay at home or shelter in place orders. Schools, restaurants, bars, gyms, cinemas and public events have been shut down in much of the country as residents are urged to stay inside except for essential purposes. But several governors were late to issue such orders, neglecting to do so until thousands of cases of coronavirus had already been confirmed in their states.

Trump has repeatedly argued that such decisions should be left up to the states. But the White House has put forward stringent social distancing guidelines, which currently will remain in effect until April 30.