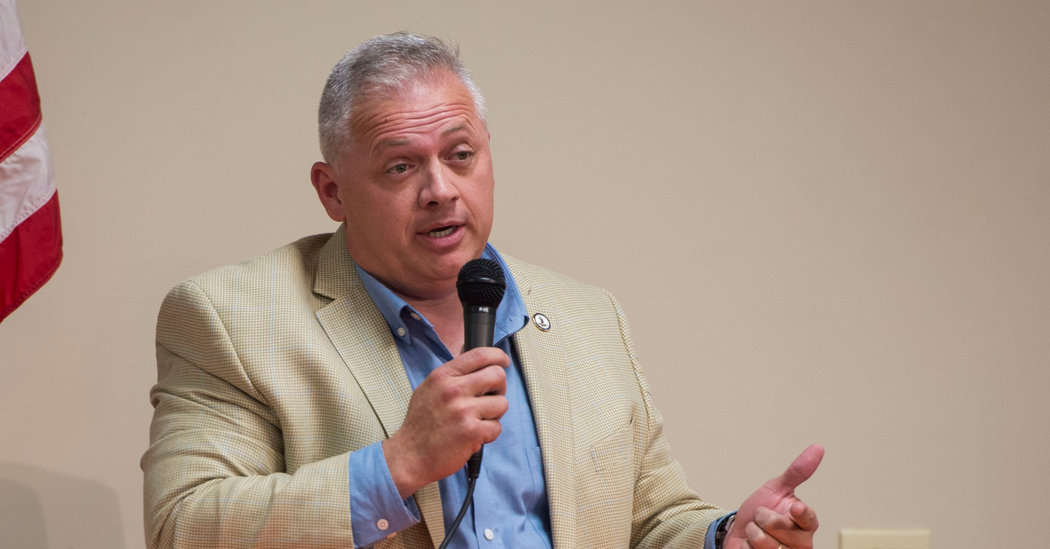 WASHINGTON — Representative Denver Riggleman, a freshman Republican from Virginia, is facing a primary challenge that will be decided on Saturday in a drive-through state convention following an uproar among local activists after Mr. Riggleman officiated a same-sex wedding.

Mr. Riggleman, a distillery owner and a former Air Force intelligence officer with a libertarian streak, was met with a wave of outrage from conservative activists in his district after he officiated the summer wedding of two men who had volunteered for his campaign. Several party county committees voted to censure him, and Bob Good, a former county official who was once an employee of Liberty University, threw his name into the race to challenge him from the right, arguing Mr. Riggleman “betrayed the trust” of Republicans in the district.

Further adding to the treacherous political terrain for Mr. Riggleman is the unusual way the primary will be decided. Across a sprawling congressional district, as many as 3,500 party delegates were expected to cast ballots on Saturday at a socially distanced drive-through convention held in Lynchburg, Va., the result of state laws that allow party organizations to choose congressional nominees by conventions instead of traditional primary elections.

Mr. Riggleman has denounced the setup, which was decided by a Republican district committee, as “a bizarre Dairy Queen convention.” And he has fiercely defended his decision to officiate the wedding of his two former volunteers.

“The Republican Party, when you look at the creed to protect civil liberties and religious liberties, could be the most inclusive party in the country,” Mr. Riggleman told Politico in an interview. “Why aren’t we a big-tent party? Why aren’t we looking at liberties first? Why aren’t we allowing people to live the way they want to live and stopping the government from reaching into every aspect of our lives?”

Mr. Riggleman, whom President Trump endorsed in December for re-election, has raised over $1.3 million, far outpacing his opponent, who raised less than $200,000. But that may mean little in this primary contest where Mr. Good, a former athletic official at Liberty University, the evangelical college co-founded by Jerry Falwell Sr., has touted a socially conservative platform.

Further complicating the race is that Mr. Good, a former Campbell County supervisor, failed to correctly file the paperwork to be named on the ballot in November’s general election, setting up a possible catastrophe for Republicans should he advance. The Virginia Republican Party has asked the state board of elections to extend the filing deadline.

The mostly rural district is the largest in the state, spanning from west of Washington to the Virginia-North Carolina border. For some delegates, casting their vote may have required driving up to three hours to the church in Lynchburg where the convention was being held.

On Saturday, delegates lined up in their cars outside the church’s parking lot, with some waiting for over an hour to cast their ballots, according to The Roanoke Times.

“Long waits to submit a ballot in Virginia’s Fifth Congressional District mean that only the most intense voters will end up voting,” said Stephen Farnsworth, a professor of political science at the University of Mary Washington in Fredericksburg, Va. “This is what a terrible system looks like.”