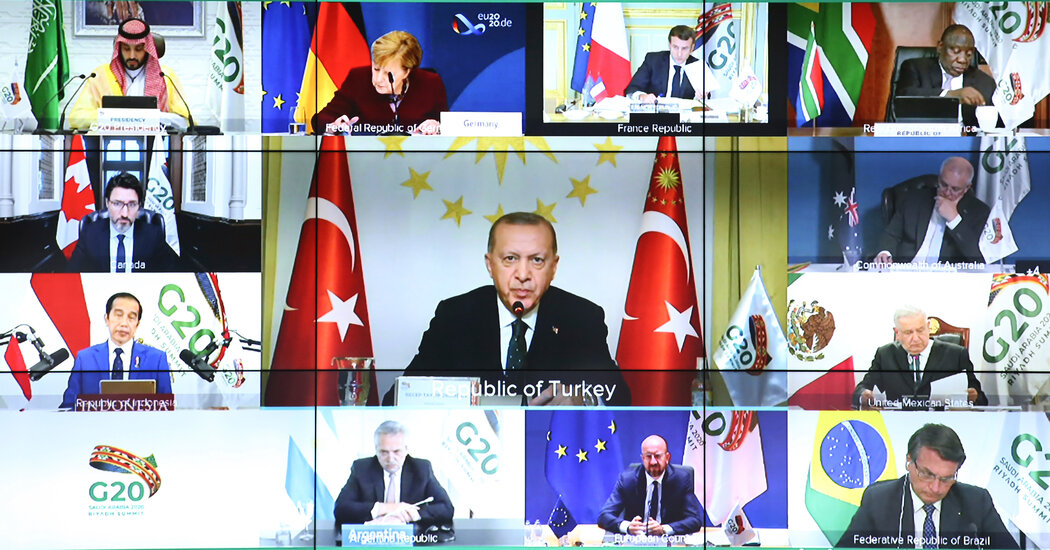 WASHINGTON — Officials at the Group of 20 summit meeting released a closing statement on Sunday that served as perhaps the Trump administration’s final reminder of the wide gulf between the United States and its allies on handling global threats like the coronavirus pandemic and climate change.

In its statement, or communiqué, the group emphasized what it called the “important mandates of the United Nations’ systems and agencies, primarily the W.H.O.,” referring to the World Health Organization, an agency Mr. Trump announced a withdrawal from in July, threatening to cut off one its largest sources of funding. The communiqué, released after a two-day virtual meeting hosted by Saudi Arabia, said the group supported strengthening the W.H.O.’s “overall effectiveness in coordinating and supporting the global response to the pandemic and the central efforts of member states.”

Over all, the communiqué offered little in terms of any breakthrough announcements beyond general appeals for more global cooperation and “affordable and equitable access” to therapeutics and vaccines. The lack of more significant initiatives underscored how difficult it is for the G20 to carry out an agenda when the United States is indifferent — Mr. Trump skipped part of the summit to play golf — or even hostile to many of its positions, even during a pandemic that has killed more than 1.3 million people globally.

The statement came the same day as another reminder of Mr. Trump’s rejection of international agreements: The United States formally withdrew from the Open Skies Treaty, negotiated three decades ago to allow nations to fly over one another’s territory with elaborate sensor equipment to assure that they are not preparing for military action. American officials had long complained that Russia was violating the accord, and Mr. Trump had announced the action in May, starting a six-month clock on the withdrawal.

President-elect Joseph R. Biden Jr. had favored remaining in the treaty. When he arrives in office in January, he will quickly have to confront the expiration of the last remaining major arms control agreement with Russia, New START, a clean extension of which Mr. Trump has refused to sign off on. Mr. Biden has said he will try to save that accord.

The G20’s closing statement on Sunday also referred to other areas where Mr. Trump has caused friction, calling climate change one of “the most pressing challenges of our time” and saying that the Financial Stability Board, a group of international regulators, was “continuing to examine the financial stability implications” of the issue. The United States had resisted the inclusion of climate change in a joint declaration of finance ministers this year but eventually relented.

Mr. Trump, who has brushed aside dire predictions about the effects of climate change and routinely refused to acknowledge it as a man-made problem, most recently removed the scientist responsible for the National Climate Assessment. That scientist served as the federal government’s premier contribution to climate knowledge and the foundation for regulations to combat global warming.

In his remarks at the virtual meeting on Sunday morning, Mr. Trump reiterated his opposition to the Paris Agreement, claiming it was “not designed to save the environment” but instead “was designed to kill the American economy.” The United States formally withdrew from the climate accord this month, but Mr. Biden has pledged to rejoin.

Mr. Trump’s go-it-alone dynamic has hampered conferences of global leaders since he took office. Before last year’s G20 summit in Osaka, Japan, Mr. Trump set the tone by attacking America’s closest allies, including the host country. When he attended the 70th anniversary of NATO in London last year, Mr. Trump left abruptly after an embarrassing video of other world leaders privately mocking him surfaced.

The lack of American leadership at such forums comes as the world continues to face severe economic strain from the pandemic. The International Monetary Fund projected last month that the global economy would contract 4.4 percent in 2020 and that the recovery would be long, uneven and uncertain. Poor countries have been particularly vulnerable to the effects of the virus; the World Bank estimated in October that the pandemic could push more than 100 million people into extreme poverty this year.

On Sunday, the leaders threw their support behind a new framework to provide debt relief for poor countries that have been hit hard by the pandemic and reiterated their commitment to freezing bilateral debt payments through June. More than 40 countries have gained over $5 billion in immediate debt payment relief this year. Steven Mnuchin, the Treasury secretary, had already backed the measure, but it was not clear it was on Mr. Trump’s radar.

And, after four years of Mr. Trump shaking up the global order on international trade, the communiqué underscored a commitment to the future of the World Trade Organization, expressed support for the “multilateral trading system” and called for a “stable” trade environment and open markets. Although there was no mention of tariffs, the language could be read as a rebuke to Mr. Trump’s penchant for protectionism and trade wars.

It was not just the formal language that underscored the rift between European leaders and the outgoing American president. On Saturday, Mr. Trump was not listed as a participant at a sideline event at the conference on pandemic preparedness and response. Speakers at the event included President Emmanuel Macron of France and Chancellor Angela Merkel of Germany. Mr. Trump, however, played golf at his club in Virginia, his fifth day there since the election, whose results he is still contesting despite no evidence to support his claims. Mr. Trump was back at Trump National Golf Club on Sunday afternoon for his sixth tee time.

“At the height of the global financial crisis in November 2009, George W. Bush convened the first G20 leaders’ summit to chart the course for repair and reform of the world economy,” said Daniel M. Price, a former adviser to Mr. Bush who was responsible for international trade and investment. “When that forum met yesterday to address the Covid-19 crisis, Donald Trump chose to play golf, underscoring the task facing President-elect Biden to restore the trust and confidence in U.S. leadership so depleted by his predecessor.”

In a statement on Sunday afternoon, the White House summarized Mr. Trump’s participation in the weekend summit and seemed to suggest that he would be involved in the G20 next year, when Italy will host.

“President Trump thanked Saudi Arabia for its leadership during its G20 presidency and looked forward to working with Italy as incoming G20 president,” Kayleigh McEnany, the White House press secretary, said in a statement.