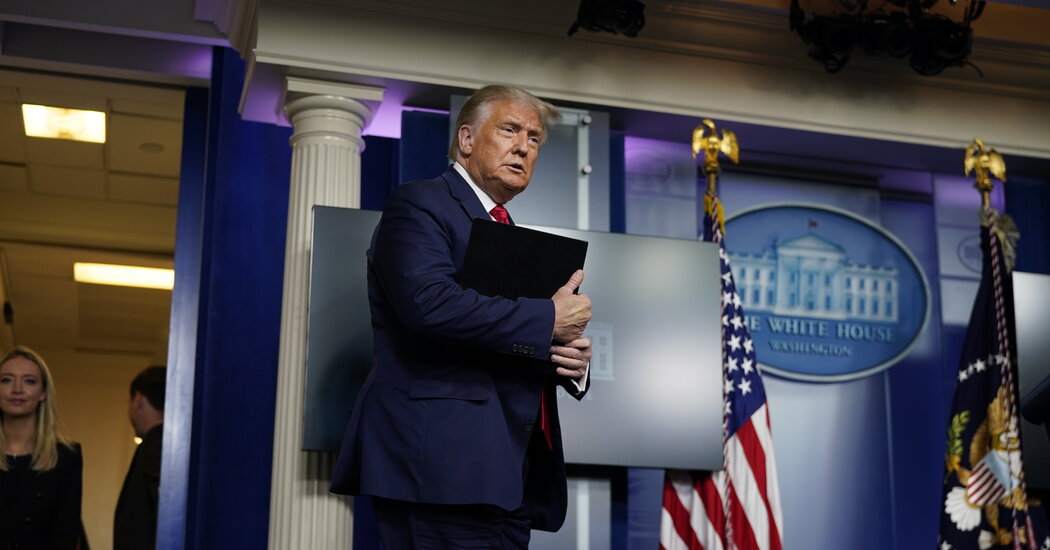 WASHINGTON — A presidential address in front of the Gettysburg battlefield, or at the Liberty Bell in Philadelphia. A speech from the first lady, Melania Trump, at Seneca Falls, N.Y., the cradle of the national movement for women’s rights. Perhaps a stage for the warm-up acts built at the Trump International Hotel in Washington, D.C.

These are some of the scenarios that have been under discussion among President Trump and his top aides as they hold out hope for an ambitious, Trumpian display over four nights of Republican National Convention programming.

Despite the surging coronavirus pandemic, which forced Mr. Trump to cancel the convention in Jacksonville, Fla., after moving it from its original location in Charlotte, N.C., he and his advisers are counting on some form of the spectacle to serve as a boost to the flagging incumbent as he heads into the final stretch of the campaign.

Mr. Trump has said he plans to travel to Charlotte to thank delegates who are still planning to gather there for meetings and the official roll call, despite the state’s social distancing requirements.

But his advisers have been thinking bigger, according to six people involved in the efforts, looking for ways to re-create what they view as the president’s most successful speech since the virus halted regular events: his address in front of Mount Rushmore over the July 4 weekend, when Mr. Trump described his effort to win a second term as a battle against a “new far-left fascism” seeking to wipe out the nation’s values and history.

The Democrats have condensed their planned convention in Milwaukee to almost nothing, shrinking a gathering of 50,000 people to something that may have as few as 300 attendees. And Mr. Trump has now twice been forced to upend his plans to deliver a rousing renomination speech in front of a packed crowd of fans, conceding that “to have a big convention is not the right time.”

But Mr. Trump’s advisers are still pushing for some version of the show to go on, and searching for historical locations that they want to reinforce the messages of the various convention speakers.

The idea of having Ms. Trump speak from Seneca Falls, the site of the 1848 Seneca Falls women’s rights convention — a move that advisers thought could offer the president a boost as he tried to win back women in the suburbs — was briefly considered. But it was deemed to be too difficult to pull off in a short time frame. A spokeswoman for Ms. Trump did not respond to a request for comment about her convention plans.

In meetings at the White House, Trump advisers have also discussed the possibility of returning to Mount Rushmore for an encore performance. And they have proposed to Mr. Trump other national monuments closer to the White House that could serve as outdoor vistas for his renomination speech on Aug. 27.

One such venue that drew Mr. Trump’s attention was Gettysburg, a wide-open national park with a built-in theme about a country divided against itself. The aides thought the setting would flatter Mr. Trump by allowing him to draw a comparison he loves: one between himself and Abraham Lincoln. Mr. Trump delivered a speech at Gettysburg during his campaign four years ago, calling it an “amazing place” and suggesting that the country was as divided as it had been during the Civil War. He also said that the election was rigged against him and that he planned to sue the women who had accused him of aggressive sexual advances (he never did).

A White House official said the president was leaning toward a series of speeches that could be held outdoors in different places, and a stage that would serve as the main hub of activity all week in Washington. It is also not yet clear if any of the ambitious plans will come to fruition for a convention set to start on Aug. 24.

Some aides have been pushing for Mr. Trump’s own Washington hotel, just down the street from the White House, to serve as the convention week hub. But other Washington locations are currently being more seriously considered.

“Conventions have gone the way of the dinosaur,” said Brian Ballard, the top Republican lobbyist in Florida and a major party donor, who was one of the key fund-raisers for the convention when it was set for Jacksonville. “But the acceptance speech matters more than anything else. I hope they find an iconic location. It will be unique, and make history.”

Mr. Trump has also indicated both privately and publicly that he likes the idea of giving his renomination speech from the confines of the White House — a move that would technically be legal but blurs the line between political candidate and public servant. Other presidents have come close to the line — President Barack Obama filmed two political advertisements in 2012 from the chief of staff’s office in the West Wing — and Trump advisers said they were on solid legal footing if Mr. Trump spoke from the residence rather than the West Wing.

So far, however, little except an overarching theme about the “forgotten men and women of America” has been finalized, and Mr. Trump has been characteristically indecisive about signing off on any plans. Tim Murtaugh, the campaign’s communications director, said the convention would still be “a celebration of the accomplishments of President Trump on behalf of all Americans.”

Aides said they were planning programming that would reflect the kinds of stories highlighted every year during the State of the Union address, featuring speakers who are regular Americans with stories to tell about how their lives were affected by opportunity zones, school choice scholarships, or other initiatives promoted by the administration.

Campaign advisers claimed that they were in no rush to announce more, and that the campaign could benefit from an element of surprise in whatever location and program the president ultimately settled on.

The group involved in the convention planning from within the White House includes veterans of Mr. Trump’s 2016 election effort. Among them are Jared Kushner, the president’s son-in-law, who is overseeing his entire re-election effort; Kellyanne Conway, the White House counselor and 2016 campaign manager; Hope Hicks, a senior adviser; and Stephen Miller, the chief speechwriter. Ronna McDaniel, the chairwoman of the Republican National Committee, has also been deeply involved, along with Justin Clark, the deputy campaign manager; Jason Miller, the campaign strategist; and one of Mr. Trump’s go-to pinch-hitters, Tony Sayegh, a former top official in the Treasury Department who also helped the White House communications department navigate Mr. Trump’s impeachment.