Three members of the White House coronavirus taskforce have placed themselves in self-quarantine after contact with someone who tested positive for Covid-19. It comes as the British prime minister, Boris Johnson, prepares to unveil his “roadmap” to a new normality in a national broadcast and global infections pass four million.

Dr Anthony Fauci, the director of the National Institute of Allergy and Infectious Diseases, Dr Robert Redfield, director of the Centers for Disease Control and Prevention, and the commissioner of the Food and Drug Administration, Stephen Hahn, are all expected to work remotely due to potential exposure to Covid-19.

Fauci’s institute said that he has tested negative for Covid-19 and will continue to be tested regularly. It added that he is considered at relatively low risk based on the degree of his exposure, and that he would be taking appropriate precautions to mitigate the risk to personal contacts while still carrying out his duties. While he will stay at home and telework, Fauci will go to the White House if called and take every precaution, the institute said.

Redfield will be teleworking for the next two weeks after it was determined he had a low-risk exposure to a person at the White House, the CDC said in a statement Saturday evening. The statement said he felt fine and has no symptoms.

A few hours earlier, the Food and Drug Administration confirmed that Hahn had come in contact with someone who had tested positive and was in self-quarantine for the next two weeks. He tested negative for the virus.

All three men were scheduled to testify before a Senate committee on Tuesday, and it’s understood they will be allowed to do that via videoconference.

Politico reported Hahn had come into contact with Katie Miller, vice president Mike Pence’s press secretary, who tested positive for the virus on Friday. Her husband, Stephen Miller, is a top advisor to Donald Trump. On Thursday the White House confirmed that a member of the military serving as one of Trump’s valets had also tested positive for Covid-19.

Trump, who publicly identified Miller’s positive test, said he was not worried about the virus spreading in the White House. However, officials said they were stepping up safety protocols. 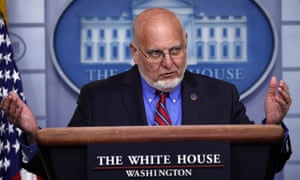 Dr Robert Redfield, director of the Centers for Disease Control and Prevention, will tele-work for two weeks. Photograph: Alex Brandon/AP

Redfield sought to use the exposure as a teachable moment. The CDC statement said if he must go to the White House to fulfil any responsibilities as part of the coronavirus task force, he will follow CDC practices for critical infrastructure workers.

Those guidelines call for Redfield and anyone working on the task force to have their temperature taken and screened for symptoms each day, wear a face covering, and distance themselves from others.

Trump has resisted wearing a mask. In a meeting with the nation’s top military leaders on Saturday evening, he did not wear a mask during the brief portion that reporters were allowed to view. The generals around Trump were also unmasked, but participants did sit a few feet away from each other.

White House chief of staff Mark Meadows said the administration was stepping up mitigation efforts. It already requires daily temperature checks of anyone who enters the complex and has encouraged social distancing among those working in the building.

Elon Musk, meanwhile, announced he was suing authorities in California over Covid-19 restrictions that have kept his Fremont factory closed and threatened to move his operation out of the state.

“If we even retain Fremont manufacturing activity at all, it will be dependent on how Tesla is treated in the future,” he tweeted.

In Britain, Boris Johnson is expected to unveil a coronavirus warning system for England when he outlines plans to gradually ease the lockdown in an address to the nation on Sunday evening.

It is understood that a warning system administered by a new “joint biosecurity centre” will detect local increases in infection rates, with the aim of altering restrictions locally in England. The alerts will range from green at level one to red at level five. Johnson is expected to say that the nation as a whole is close to moving down from four to three.

Trump and Fauci: America’s future hangs on this delicate relationship

The UK has the second highest death toll from the virus, at 31,662, with more than 266,500 infections. On Saturday the government told airlines it would introduce a 14-day quarantine period for most people arriving from abroad to try to avoid a second peak of the coronavirus outbreak.

South Korea’s capital has ordered the closure of all clubs and bars after a burst of new cases sparked fears of a second coronavirus wave.

In Mexico, coronavirus patients were being turned away from hospitals on Saturday, as both public and private medical facilities quickly filled up and the number of new infections continued to rise. Of the 64 public hospitals in the capital’s sprawling metro area designated to receive Covid-19 patients, 26 were completely full, according to city government data.

In other coronavirus developments: