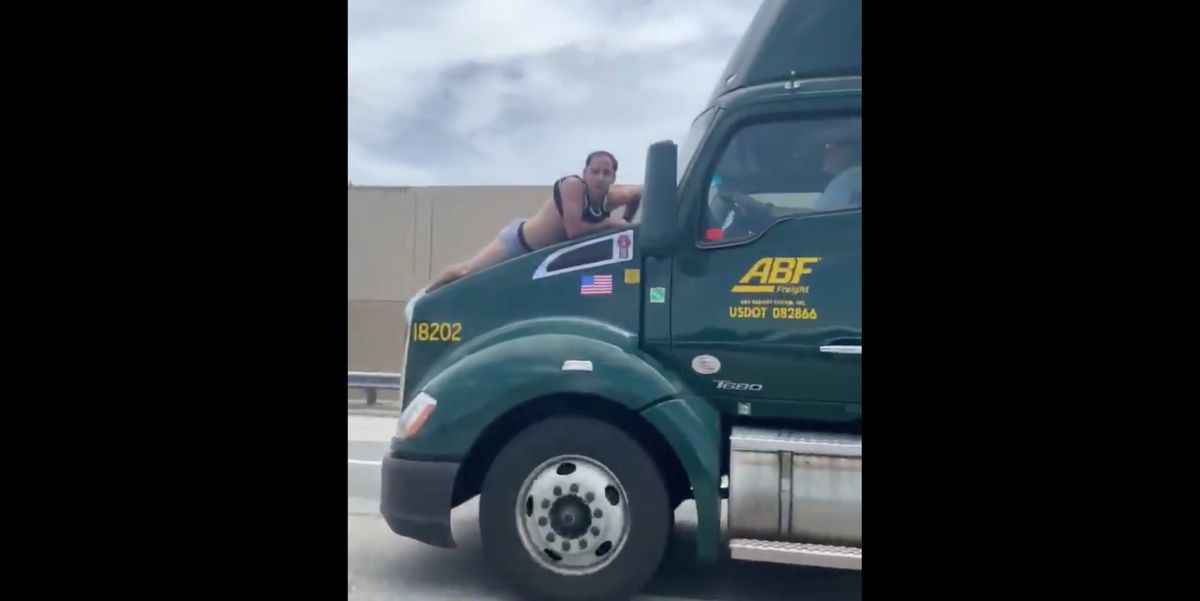 A graphic viral video showed the moment a blood-soaked man clung to the hood of an 18-wheeler as the truck rushes down a Florida highway.

On Saturday, the Florida Highway Patrol received a report about a blood-covered male exiting his vehicle and walking away from it on a highway near Boynton Beach, Florida.

Eyewitnesses say they saw the man — who appears to be in his underwear — hop the concrete barrier between the highway’s northbound and southbound lanes, which prompted concerned motorists to slow and stop.

Edward Hughes, the man driving the 18-wheeler, told TMZ that he observed the unnamed man attempting to flag him down. Hughes said he stopped the truck, concerned for the man’s welfare.

Instead of speaking with Hughes, the man climbed atop the truck’s hood and began hitting the windshield with an unidentified metal object.

Hughes said he attempted to get the man off the hood of the vehicle by beginning to drive away, but the man was committed to clinging to the hood and refused to be shaken off. Though Hughes was seen in the video suddenly braking and weaving in and out of his lane on the highway, the man remain attached.

He said that he drove for nearly nine miles before police were able to intervene and take the man into custody.

‘This is Florida at its finest’

“I zoom ahead of [Hughes’ truck], and I see a guy on the hood smashing the windshield with a flat bar, and then he took out the driver’s side window,” Morales recalled. “The guy on the hood had blood all over his face. He was only wearing socks and underwear.”

Morales said he also witnessed the moment police took the man into custody.

“They took him down,” he said. “He lay on his belly, put his hands down forward, and they grabbed him by his hands and yanked him onto the ground and put him in cuffs. He just wanted it to be over. He was pretty tired from hanging onto the hood of the truck, so he just kind of gave up there. This is Florida at its finest.”

The suspect was taken to nearby Wellington Regional Hospital for observation.

It remains unclear at the time of this reporting whether Hughes or the unidentified male were cited or arrested in connection with the bizarre incident.