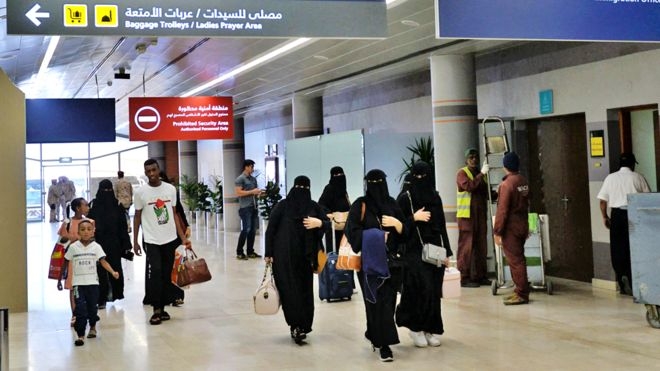 The land of progress – Saudi Arabia – has reached an acme of equality today. The Saudi regime is allowing women to travel without male guardians. The royal family has decided women over the age of 21 should be allowed to get passports without their husbands or fathers needing to sign off on it, despite resisting such silly Western ideas for years.

It obviously seems more of a reluctant calculation than any sort of genuine progress, but even so it’s undeniable the country is going through some changes.

Here’s what Mark wrote just over two years ago, upon the passing of Prince Abdul-Rahman bin Abdulaziz al Saud.

I see that Prince Abdul-Rahman bin Abdulaziz al Saud died the other day. If you’re having trouble keeping track of your Saudi princes, well, I don’t blame you. Unlike the closely held princely titles of the House of Windsor, the House of Saud is somewhat promiscuous with the designation: there are (at the time of writing) over 10,000 Saudi “princes” running around the country – and, in fact, at this time of year, more likely running around Mayfair and the French Riviera, exhausting the poor old blondes from the escort agencies. I believe that’s Abdul-Rahman at right, although to be honest all Saudi princes look alike to me, except that some wear white and others look very fetching in gingham. As I once remarked to Sheikh Ghazi al-Ghosaibi, the late cabinet minister, he was the only Saudi I knew who wasn’t a prince.

Abdul-Rahman was a longtime Deputy Defense Minister, whose catering company, by happy coincidence, held the catering contract for the Defense Ministry. The first Saudi prince to be educated in the west, he was a bit of a cranky curmudgeon in later years, mainly because of changes to the Saudi succession that eliminated any possibility of him taking the throne. But he nevertheless held a privileged place as the son of Ibn Saud, the man who founded the “nation” and stapled his name to it. When I say “the son”, I mean a son: Ibn Saud had approximately 100 kids, the first born in 1900, the last over half-a-century later, in 1952, a few months before ol’ Poppa Saud traded in siring for expiring.

Abdul-Rahman’s mother was said to be Ibn Saud’s favorite among his 22 wives – or, at any rate, one of the favorites. Top Five certainly. She also had the highest status, because she bore him more boys – seven – than any other other missus. They’re known as the Sudairi Seven or, alternatively, the Magnificent Seven. She also gave him seven daughters. They’re known as the seven blackout curtains standing over in the corner. This splendidly fertile lady’s name was Hussa bint Ahmed, and she was Ibn Saud’s cousin once removed and then, if I’m counting correctly, his eighth wife. But she’s a bit like the Grover Cleveland of the House of Saud – in that he’s counted as the 22nd and 24th President of the United States, and she’s the eighth wife and also either the tenth or eleventh. He first married her when he was 38 and she was 13. But he divorced her and then remarried her. In between their marriages she was married to his brother, but Ibn Saud was a sentimental lad and never got over his child-bride-turned-sister-in-law, so he ordered his brother to divorce her.

Don’t worry, though: In the House of Saud, it’s happy endings all round. Two of their daughters wound up marrying two of the sons of another brother of Ibn Saud. The Saudi version of Genealogy.com must be a hoot: “Hey, thanks for the DNA sample. You’re 53.8 per cent first cousin, and 46.2 per cent uncle.”

Anyway, all this Saudomy reminded me that on The Mark Steyn Show back in January I offered a few thoughts on Ibn Saud’s establishment of his alleged kingdom. This is the first time this has been aired in the wider world, so give it a click and see what you think:

The Mark Steyn Show is made possible through the support of members of The Mark Steyn Club, for which we’re very grateful. Among the pleasures of membership is that you can enjoy our TV content in any medium you desire: video, audio or text. So, if you’d rather sample the above in non-visual form, please log-in here. (You can find other editions of The Mark Steyn Show over in our Audio & Transcripts department.) Membership of the Club isn’t for everyone, but it does ensure that all our content remains available out there for everyone – in print, in audio, in video, all around the world. For more information on The Mark Steyn Club, see here.

If you’d like to weigh in on the malign Saudi state, feel free to be as Saudiphobic as you wish in the comments below.