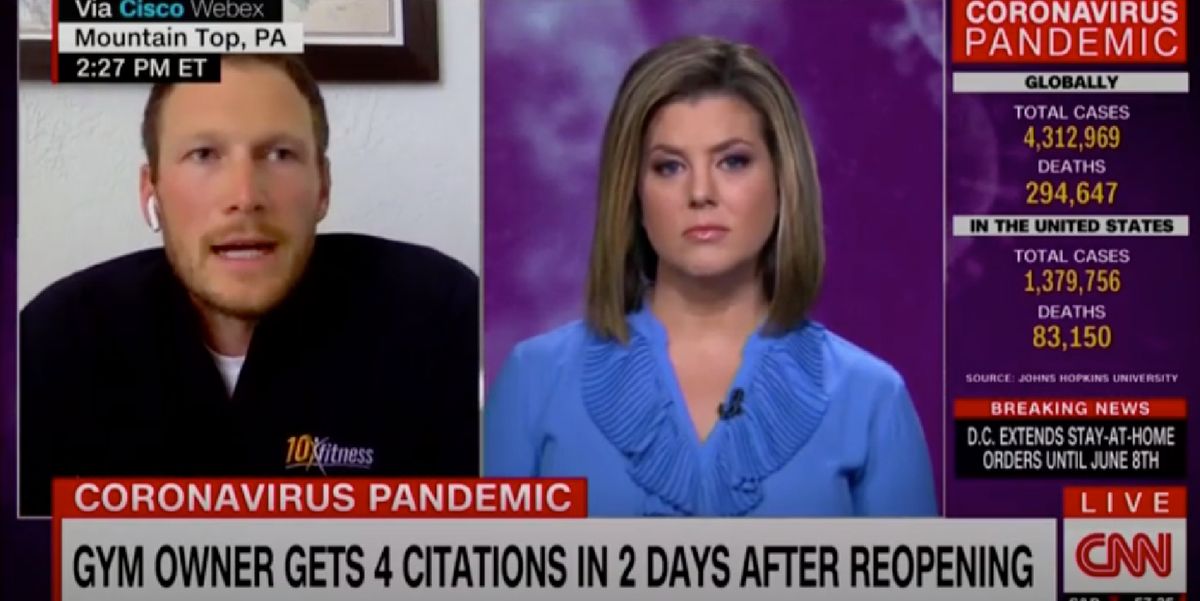 Pennsylvania gym owner Dan Cronauer said the people inspired him to open up on Monday despite the state’s COVID-19 lockdown orders. In response, he received no fewer than four citations in two days.

Despite the local community crying out for his services, Cronauer ultimately ended up closing up shop — which he had temporarily reopened for free — on Tuesday night for the foreseeable future.

According to ABC News, Cronauer announced the abrupt closure in a Facebook post, writing, “Unfortunately, due to citations, we will have to close our doors once again until further notice. In preparing to take this unprecedented stand, we did expect these consequences.”

Cronauer spoke with CNN on Wednesday in a defense against his decision to reopen.

“I myself suffer from anxiety, depression, panic attack disorder,” he admitted. “I know how bad that feels for a lot of people. And it got to the point where others were expressing to me, ‘I need the gym. I need the gym.’ Like it was their medication. They needed to get back in the gym, so our decision came from the people. … [I]t got really hard for us to close the doors because people look back at us like, ‘I’m so glad you’re doing this for me,’ and they’re thrilled.”

Cronauer added that there’s nothing like a “good gym environment.”

“Whether we’re 10 feet or 15 feet away, seeing your friend or buddy, a recognizable face, you’re waving hello to them,” he said. “That comes with the gym. It’s not just lifting things up and putting them down, right? It’s about the social interaction as well, the mental clarity, and when you’re in your house, there’s always this other thing that can be done, right? You’re doing your pushups, and then, ‘Oh, crap, I’ve got to do the laundry.’ There’s always something else in the back of your head running. But when you enter the gym, your mind gets to shut off. You get to put that music on and really just decompress for that hour that we’re limiting people to.”

He insisted that he and his patrons were taking proper precautions to up the ante on hygiene, and said that people only wore masks if they wanted to.

“We had some people wearing masks. Others weren’t. It was really up their requirement — or up to their preference if they wanted to or not,” he said.

On Tuesday, Cronauer told ABC News that he believes gyms should be considered essential businesses.

“I think that we have to look at gyms and ask, how important are they for people and for their mental health?” Cronauer said. “I don’t think it’s right to lump certain businesses in certain categories.”

He continued, “How’s a gym not essential? Not everyone has access at home. The gym can be essential to a lot of people.”

According to ABC News, Pennsylvania began to lift certain restrictions on work and social interactions in certain counties across the state under a phased plan.

But all gyms statewide remained closed.

Pennsylvania’s stay-at-home order is in effect in Lackawanna County at least through June 4.