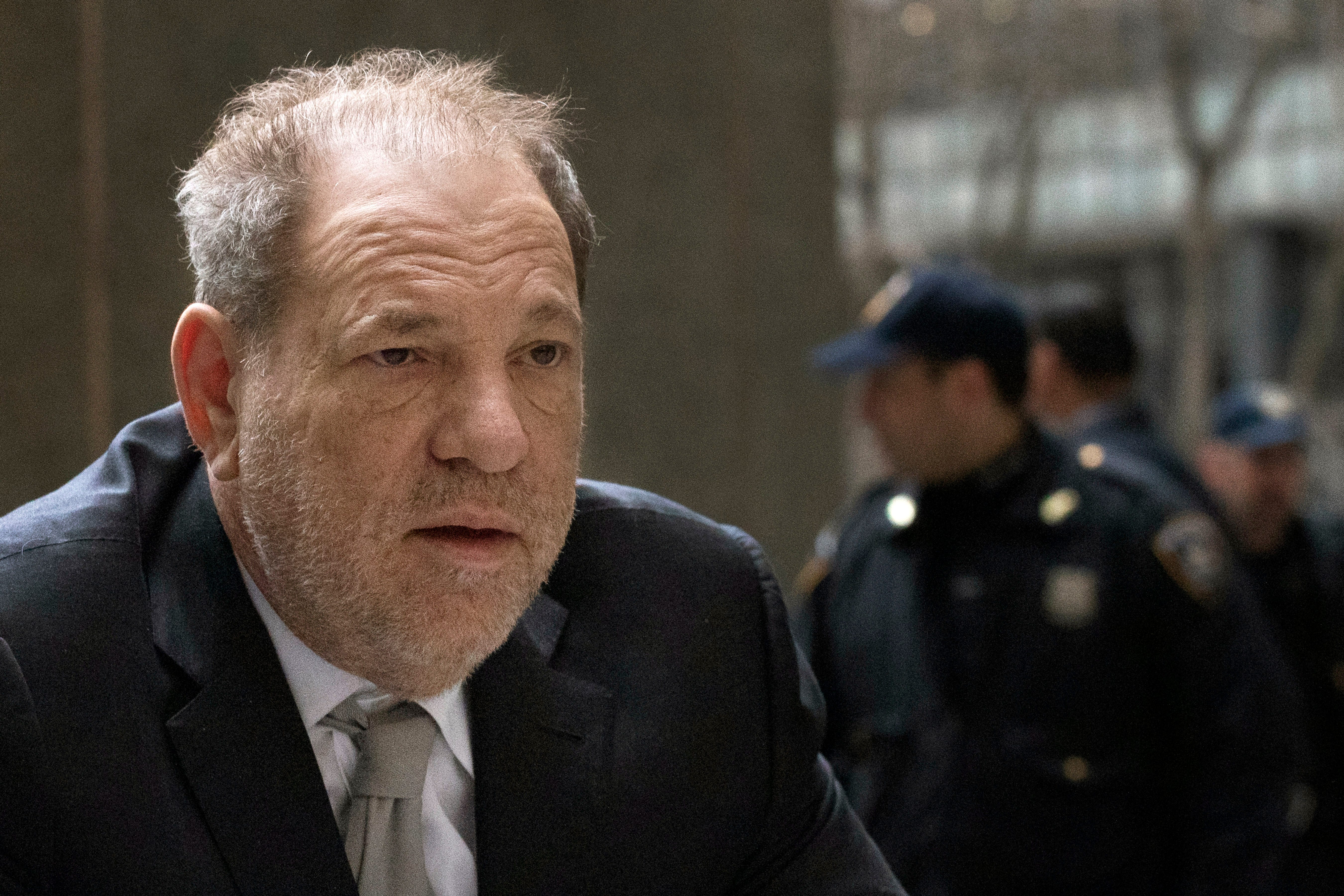 Weinstein was immediately handcuffed and taken into custody. He is scheduled to be sentenced March 11.

The split verdict was rendered after during the fifth day of deliberations by a jury of seven men and five women.

The verdict was a partial win for the prosecution: Weinstein escaped the two most serious charges of predatory sexual assault, plus one charge of rape in the first degree, which spared him the possibility of a sentence that included life in prison.

Weinstein’s mouth was agape as the verdict was read, and his defense attorney Donna Rotunno shook her  head. As the jury was being polled, he huddled with Rotunno and another defense attorney, Arthur Aidala, at the defense table.

The jury reached the verdict around 11:30 a.m. ET Monday. Just before it was read, the defense filed a motion for a mistrial citing an anonymous email sent to a member of Weinstein’s legal team regarding a juror. Judge James Burke denied it, saying the issue was moot as the jury had reached a verdict.

During the lengthy trial (Monday was the 23rd day), each of the six accusers testified, sometimes for hours, and cried often as they recounted in graphic detail what they said Weinstein did to them, described the appearance of his body and genitals, his intimidating bulk and trigger temper.

Two accusers quoted him saying shocking or outrageous things, testifying that he told them the way to get ahead in Hollywood is to trade sexual favors and that A-list actresses had done the same.

He pleaded not guilty.

Weinstein has denied all allegations of non-consensual sex since media exposès were published in October 2017. He has been accused by more than 80 women of sexual misconduct, ranging from harassment to rape, over decades and in multiple jurisdictions around the world.

Besides the two accusers whose allegations were central to the case, Weinstein’s trial also featured testimony from four other accusers who testified that Weinstein sexually assaulted them in New York or California as far back as 1993 and as recently as 2013.

Three of these women, Dawn Dunning, 40, Tarale Wulff, 43, and Lauren Young, 30, were the so-called “Molineux witnesses,” whose accusations were either too old or out of jurisdiction to prosecute but were intended to help prosecutors prove that Weinstein was a serial predator with a recognizable pattern.

A fourth witness, “Sopranos” star Annabella Sciorra, 59, who testified that Weinstein raped her in her New York apartment in the winter of 1993-94, was intended to help bolster the prosecution’s argument about the “predatory” nature of Weinstein’s behavior, thus enhancing his sentence if convicted.

The not-guilty verdict on those counts suggests the jury did not believe Sciorra’s story, or that it was too old to believe beyond a reasonable doubt.

Weinstein’s reckoning with accusers is not over. For one thing, he faces multiple civil suits from dozens of accusers; a proposed settlement in the civil cases is on hold and at least some of the plaintiffs have rejected it as not good enough in terms of either money or punishment.

“Weinstein may have been able to avoid testifying in the criminal trial, but he will not be afforded that right in his civil trials,” said Douglas Wigdor, an attorney for civil plaintiffs who have rejected the proposed settlement. “I relish the day when I get to cross-examine him and ask him to answer for the wrongs he has committed against so many women.”

More ominously, on the day the Weinstein trial opened on Jan. 6, prosecutors in Los Angeles County charged him with raping one woman and sexually assaulting another in separate incidents over two days in 2013.

He was charged with four sex crimes, including one felony count each of forcible rape, forcible oral copulation, sexual penetration by use of force and sexual battery by restraint.

The latter charge involves Young, who testified in New York as a Molineux witness. In Los Angeles she will be a complaining witness. She testified that in February 2013, Weinstein cornered her in a Beverly Hills hotel bathroom and masturbated while groping her.

The other complaining witness in Los Angeles is an Italian model whose name has not been disclosed.

The Los Angeles case is on hold – Weinstein has not yet been arraigned – until the New York case is resolved.

The New York trial is considered historic because it’s the first major celebrity sex-crime trial of the #MeToo era. It culminated more than two years of world-wide condemnation of Weinstein and scores of other powerful men in multiple industries for an array of alleged crimes and misconduct.

But so far the Weinstein case is the only #MeToo case to be brought before a jury in a criminal court. (An earlier alleged groping case against Oscar-winning actor Kevin Spacey collapsed at the pretrial stage in Nantucket, Massachusetts, after the accuser refused to testify.)

Weinstein’s prosecution by the Manhattan District Attorney’s Office of Cyrus Vance Jr., was no accident. For one thing, Weinstein’s downfall began with bombshell reports in The New York Times and The New Yorker detailing for the first time on the record shocking accusations by such Hollywood stars as Salma Hayek, Ashley Judd, Angelina Jolie and Rose McGowan.

Meanwhile, Vance had been under pressure from activists since 2015 when his office declined to prosecute Weinstein on groping allegations made by an Italian model/actress, Ambra Battilana Gutierrez, leading to tensions with the New York Police Department. (Even with a less-than-clear audiotape of Weinstein apologizing to her, Vance’s deputies said then they didn’t have enough evidence to prosecute at the time. They later reached an out-of-court settlement for an undisclosed fee.)

It didn’t help when a lead NYPD detective on the new cases against Weinstein failed to tell prosecutors about a witness who cast doubt on allegations by accuser Lucia Evans, who said he forced her to perform oral sex on him in 2004.

As a result of that botch, prosecutors agreed to drop Evans and her allegation from the charges months before the trial, leaving only two complaining witnesses. It also led to the prosecution’s strategic decision not to call any police witnesses to testify at the trial about their investigation of Weinstein.