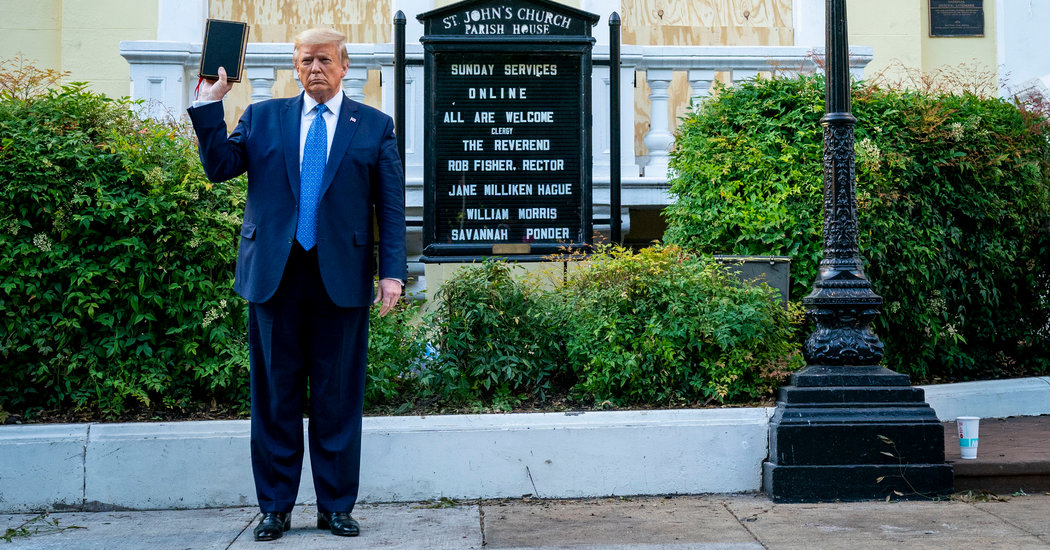 WASHINGTON — With about an hour to go before a citywide curfew was set to take effect on Monday, demonstrators outside the White House were caught by surprise as throngs of police officers in riot gear spilled out from the northeastern corner of Lafayette Square, deploying force to cut a path across the street toward St. John’s Episcopal Church.

Moments later, out of sight of many of the protesters who had been driven back, President Trump walked past the church steps and produced a Bible.

Standing outside the church, which had been damaged and boarded up after days of demonstrations against police brutality, Mr. Trump struck different poses, displaying the book for cameras, ostensibly upside-down at times.

“Is that your Bible?” a reporter asked. “It’s a Bible,” Mr. Trump replied.

The president said nothing else about the significance of the site or the circumstances of his appearance before walking back toward the White House. But the display caused immediate consternation, not only because of the tense, political backdrop just feet away, but also because of Mr. Trump’s curious and at times confounding remarks about the Bible and his relationship with the text.

The president has offered only limited glimpses into the role Christianity has played in his upbringing and adult life. He was raised Presbyterian and has cited the Rev. Norman Vincent Peale, a pastor and the author of “The Power of Positive Thinking,” as one of his earliest influences. He has said he attends church in observance of major holidays like Christmas and Easter, and has often named the Bible as his favorite book (though when pressed, he has also named some of his own books).

When Mr. Trump was sworn in as president, he joined a handful of presidents who took the oath of office on two bibles. One of them was a gift from his mother given two days before his ninth birthday, which Mr. Trump has kept since 1955.

But at times, the president’s conversations about his faith have betrayed an understanding of the Bible that religious scholars and leaders have described as limited or distorted.

In an interview with Bloomberg Politics in 2015, Mr. Trump demurred when asked to explain which Bible verses he counted among his favorites.

When one of his interviewers tried to broaden the question — “Are you an Old Testament guy or a New Testament guy?” — Mr. Trump replied: “Probably equal. I think it’s just an incredible — the whole Bible is incredible.”

When asked about his favorite biblical teaching on other occasions, Mr. Trump has given different answers. Three months later in September 2015, he cited a Book of Proverbs passage about never “bending to envy” that scholars have said does not exist. Asked again in April 2016, Mr. Trump pointed to the Old Testament teaching of “an eye for an eye,” which he said resonated with his view that the United States had been taken advantage of by rivals.

Giving an address at Liberty University in January 2016, Mr. Trump drew laughter with an errant reference to “Two Corinthians,” a commonly quoted chapter properly known as “Second Corinthians” to adherents.

The president has also been inconsistent in his own assessment of his biblical knowledge.

On the campaign trail in 2016, Mr. Trump told a crowd in Nevada, “Nobody reads the Bible more than me.” But in December, Mr. Trump offered a different view at a White House Hanukkah reception, lightheartedly imagining the evangelical pastor Robert Jeffress’s impression of him: “He may not be the greatest Christian I’ve ever seen. He may not know the Bible quite as well as the rest of us. In fact, he may not know it very well at all.”

Mr. Jeffress on Monday defended Mr. Trump’s appearance at St. John’s against critics, including the bishop who oversees the church, saying that God “hates lawlessness,” according to a report in The Atlantic. The bishop, Mariann Edgar Budde, accused Mr. Trump of appropriating religious symbols to deflect criticism in a series of interviews on Tuesday.

Other faith leaders have also suggested in the past that some of Mr. Trump’s actions and crasser remarks do not square with Christian values. During the 2016 presidential primary, Pope Francis implied that Mr. Trump was “not Christian,” given his remarks about Mexican immigrants and other groups that the pope framed as incompatible with Scripture. In December, a number of religious leaders condemned a remark Mr. Trump made at a rally suggesting that Representative Debbie Dingell’s late husband, John D. Dingell Jr., was “looking up” from hell. And in February, the president invited criticism for using an address at the National Prayer Breakfast to attack the faith of political rivals.

However, many of Mr. Trump’s less conventional acts surrounding the Bible have often been accepted and even celebrated by evangelicals. When critics pounced after Mr. Trump passed out signed copies of the Bible to survivors of a hurricane in Alabama, many faith leaders quickly pointed out that several former presidents, including Franklin D. Roosevelt and Ronald Reagan, had signed Bibles as well.

While Mr. Trump’s actual reading of Scripture may be subject to debate, the president has said he has plenty of Bibles on hand, as he has maintained a personal collection over the years.

“I get sent Bibles by a lot of people,” Mr. Trump said in an interview with CBN News in 2015. “So actually I store them, and keep them, and sometimes give them away to other people, but I do get sent a lot of Bibles.”