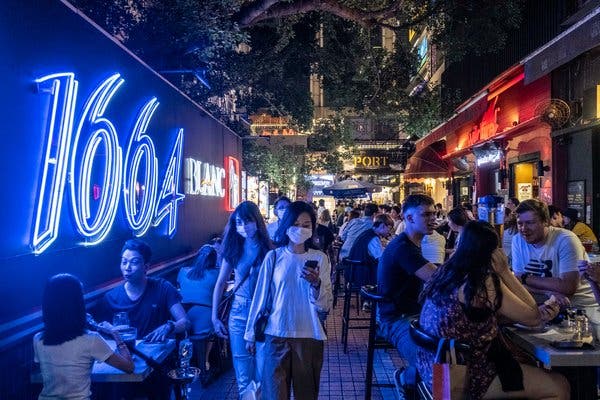 Hong Kong had just been recovering from a monthlong shutdown due to the coronavirus.Credit…Lam Yik Fei for The New York Times

Losses were significantly greater than in other markets in Asia, many of which were down about 1 percent, and on Wall Street, where the S&P 500 index fell less than 1 percent on Thursday. Property companies were among the biggest decliners.

Other markets signaled skittishness as well, as U.S. Treasury bond prices rose and oil futures fell. Futures markets were forecasting that Wall Street would open about 1 percent lower later on Friday and they predicted losses in Europe as well.

The losses came amid concerns about the future of Hong Kong, a Chinese city that operates under its own laws and has its own independent judicial system. China’s announcement signaled a potential curtailment of that status and could ignite protests like the ones that roiled the city’s streets last year and sent stocks tumbling over the summer.

The sell-off also came after China announced its plans to increase government deficit spending to help combat the economic effects of the coronavirus. Officials on Friday said that Beijing would increase the deficit this year to “above 3.6 percent” to prop up the economy, and would spend another $140 billion in the stimulus effort. While significant, that plan falls short in proportional terms of what other governments around the world have earmarked to fight the outbreak-related global economic crisis.

In Japan, the Nikkei 225 index was down 0.4 percent midday. Others fell harder as the day progressed. The Shanghai Composite index was down 1.3 percent, while South Korea’s Kospi was down 1.9 percent.

Chinese leaders and delegates at the opening session of National People’s Congress in Beijing, on Friday.Credit…Pool photo by Ng Han Guan

Chinese officials declined to set an economic growth target for this year and outlined plans to ramp up government spending, as they continue to look for ways to recover from the economic toll of the coronavirus.

In his annual report to Chinese lawmakers on Friday, Premier Li Keqiang said the country’s leaders had declined to set a target for the first time in years “because our country will face some factors that are difficult to predict in its development due to the great uncertainty regarding the Covid-19 pandemic and the world economic and trade environment.”

China’s economy shrank in the first three months of the year compared with a year earlier, the first decline in the modern era, after efforts to fight the outbreak froze vast parts of its industrial machine.

China’s growth target represents a gauge of how the country’s leaders see the economy faring, and its official figures — which most economists consider to be too smooth and steady to be precisely accurate — generally meet or exceed the goal. In recent years, the targets have declined as China’s economy slowed, and it has offered a range instead of a specific figure to give policymakers more flexibility. Last year, it set a growth target of 6 percent to 6.5 percent.

Mr. Li’s report said China would ramp up government spending by $140 billion to stir growth, plus issue a similar amount on bonds for coronavirus recovery efforts. While significant, the spending represents about 2 percent of China’s annual economic output, a smaller proportion compared with what other countries have done.

It’s been a turbulent week for markets, with shares alternating between gains and losses.Credit…Vincent Tullo for The New York Times

Stocks on Wall Street fell on Thursday, pulling back after major benchmarks had rallied the day before.

The S&P 500 fell less than 1 percent, and global benchmarks were also lower. It’s been a turbulent week for markets, with shares alternating between gains and losses each day so far as investors assessed new economic developments and the prospect of businesses reopening their doors to customers.

On Thursday, data on jobless claims from the Labor Department showed that the surge of layoffs had reached more than 38 million in nine weeks.

But economic data from Europe provided more optimism. A monthly flood of European purchasing managers’ index reports showed business activity slowly picking up: The eurozone manufacturing index came in at 39.5 points, higher than expected and up from 33.4 last month, while the services index rose to 28.7, from 12.0 last month.

The numbers for Britain also showed an upswing: The manufacturing index reached 40.6, up from 32.6 past month, and the services sector reached 27.8, up from 13.4.

In Asia, monthly trade figures in Japan showed a nearly 22 percent fall from a year ago, underscoring the weakness of demand for the goods that the country’s factories make. Heated rhetoric in Washington against China raised the prospect that relations between the world’s two biggest economies would deteriorate further. Investors also worried about worsening tensions between China and Australia, a country that depends on Chinese demand to fuel big parts of its economy.

Facebook is planning to let some employees work from home permanently.

Mark Zuckerberg said that the temporary changes caused by the virus spurred Facebook to re-evaluate its requirement that employees work in a shared office. Credit…Jim Wilson/The New York Times

Facebook will allow many of its employees to work from home permanently, Mark Zuckerberg, Facebook’s chief executive, announced during a staff meeting that was live-streamed on his Facebook page.

The social media giant sent its employees home in March as the coronavirus began to spread in the United States. Mr. Zuckerberg said that the temporary changes caused by the virus spurred the company to re-evaluate its requirement that employees work in a shared office. Within a decade, he said, as many as half of the company’s more than 45,000 employees would work from home.

Facebook will begin by allowing new hires who are senior engineers to work remotely, and then allow current employees to apply for permission to work from home if they have positive performance reviews.

Mr. Zuckerberg’s announcement followed similar decisions at Twitter and the payments company Square, both led by Jack Dorsey. Mr. Dorsey said last week that employees at his companies would be allowed to work from home indefinitely. At Google, employees have been told they can work from home through the end of the year.

Catch up: Here’s what else is happening.

Marine Corps veteran shot with rubber bullets by police at protest, ‘I had my hands up’

Marine Corps veteran shot with rubber bullets by police at protest, ‘I had my...

News DSMW - June 4, 2020
0
A Marine Corps veteran was sent to the hospital after Los Angeles police officers shot him and other protesters with rubber bullets in an effort to quell the unrest. ...

News DSMW - June 4, 2020
0
Dozens of handguns and rifles were stolen this week from a gun shop in New Mexico’s largest city, prompting authorities to offer a reward for information leading to the arrest and conviction of those responsible, officials said Wednesday. ...

News DSMW - June 4, 2020
0
As more Americans join nationwide protests following the killing of George Floyd, they’re turning to encrypted messaging apps to communicate with each other. Downloads of mobile apps like Signal — a secure messaging app which offers end-to-end encryption — have skyrocketed, getting nearly 40,000 downloads over last weekend alone according to...
MORE STORIES