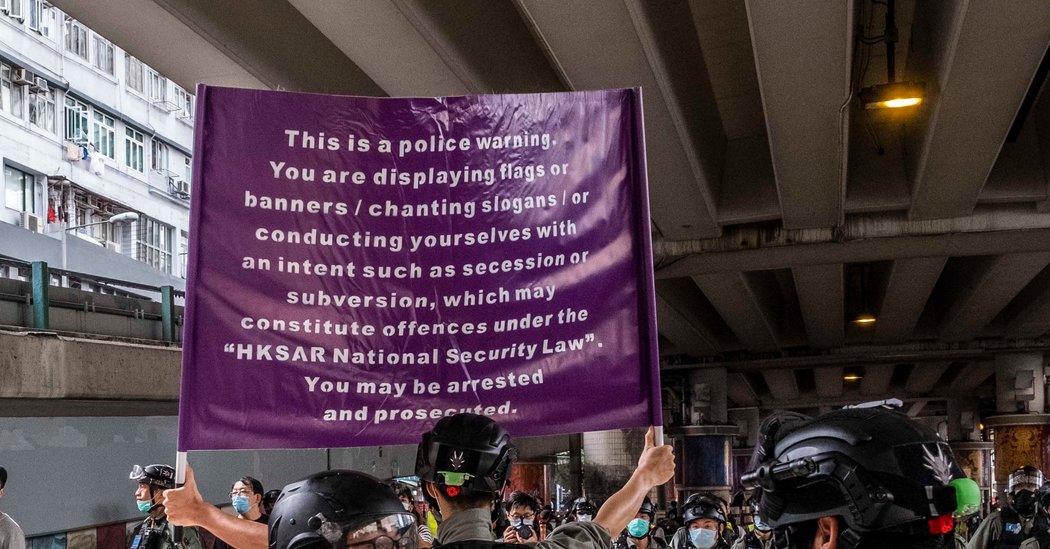 The city’s police force has often used different flags in its yearlong battles with protesters — black banners to warn of the imminent firing of tear gas and red flags to signal that a failure to stop advancing would be met with force.

But the employment of the newest flag was a surprise for how quickly it was introduced, and reflected the force’s aggressiveness in cracking down on conduct that only a day earlier was not illegal.

The flag warned protesters against “displaying flags or banners/chanting slogans/or conducting yourselves with an intent such as secession or subversion, which may constitute offenses” under the new law. “You may be arrested and prosecuted,” it read.

The notion of Hong Kong independence has long been a third rail for the Chinese government, but until the introduction of the new law, the authorities were far more restricted in their ability to quell demonstrations.

At the height of the pro-democracy protests in the city last year, one of the leading chants was “Hong Kong independence is the only way out.” The new national security law takes direct aim at such sentiments, with sentences of up to life in prison for those found guilty of any violations.

The police were not just quick to unfurl their new flag, but to make use of the new law; at midday they announced on Twitter that they had made their first arrest under the new rules, accusing a man, who was not publicly identified, of displaying a Hong Kong independence flag.

By the end of Wednesday, the police said they had arrested more than 300 people during the day’s protests, accusing them of crimes ranging from unlawful assembly, disorderly conduct and “furious driving.” Nine of those people were accused of violating the new national security law.