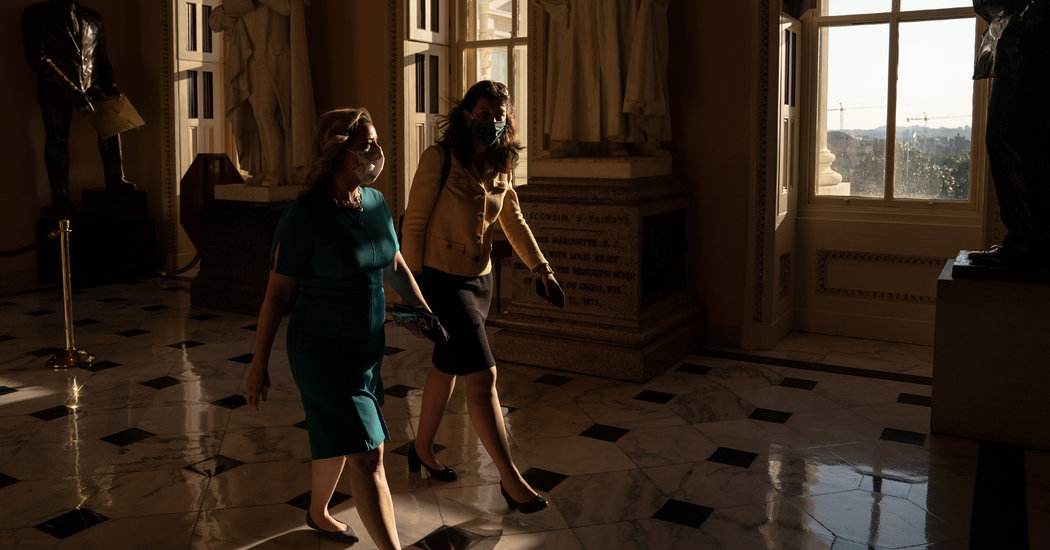 WASHINGTON — A divided House narrowly passed a $3 trillion pandemic relief package on Friday to send aid to struggling state and local governments and another round of direct $1,200 payments to taxpayers, advancing a proposal with no chance of becoming law over near-unanimous Republican opposition.

Democratic leaders characterized the measure, which President Trump has promised to veto, as their opening offer in future negotiations over the next round of coronavirus aid, forging ahead in passing it even amid rifts within their own ranks.

With nearly $1 trillion in aid to battered states, cities and Native American tribes, and another round of bolstered jobless benefits and direct government payments to Americans, the measure was an expansive sequel to the $2.2 trillion stimulus enacted in March, reflecting Democrats’ desire to push for a quick and aggressive new round of help.

“It’s always interesting to me to see how much patience some people have with the pain and suffering of other people,” Speaker Nancy Pelosi of California said as she argued for the bill on the House floor. “This is a very strategically planned piece of legislation that is tailored strictly to meet the needs of the American people regarding the coronavirus pandemic.”

The bill passed on a tight margin, 208 to 199, as some moderate Democrats from conservative-leaning districts rejected it as a costly overreach that included provisions unrelated to the pandemic. In a statement that blasted the bill as “bloated,” Representative Cindy Axne of Iowa declared that she “could not in good conscience vote to accept this Washington gamesmanship, or vote to approve unrelated wastes of taxpayer dollars.”

Even though the bill was more a messaging document than a viable piece of legislation, its fate was in doubt in the final hours before its passage. Republicans forced a vote to bar undocumented immigrants from receiving $1,200 coronavirus aid payments, hoping to garner the support of enough centrist Democrats to prevail.

If that happened, progressives were privately threatening to band together with members of the Congressional Hispanic Caucus to sink the bill, according to people familiar with their conversations who detailed them on the condition of anonymity.

Ms. Pelosi furiously worked the House floor into the evening, intercepting lawmakers as they came and went in efforts to discourage them from backing the Republicans’ proposal. She prevailed and the proposal fell short, although 13 Democrats joined Republicans in supporting it.

Republicans, for their part, denounced the bill as partisan and pointless.

“Not only is this bill premature, it was crafted behind closed doors and without any Republican input at all,” said Representative Tom Cole of Oklahoma, a member of the House Appropriations Committee.

“Instead of going big,” said Representative Kevin McCarthy of California, the minority leader, “you went crazy.”

Only one Republican, Representative Peter T. King of New York, joined Democrats to support the bill, while 14 Democrats broke with their party to oppose it.

The package contained a number of Democratic priorities, including $100 billion for rental assistance and $75 billion in mortgage relief. It would allocate $3.6 billion to bolster election security, and would provide a $25 billion bailout for the Postal Service, a lifeline that the agency has said is critical to its survival, but that Mr. Trump opposes.

It would also temporarily suspend a limit on the deduction of state and local taxes from federal income taxes — which Democrats have repeatedly pushed for — and would disproportionately benefit high-income taxpayers in high-tax areas. It would substantially expand eligibility and increase the value of some tax credits, like the earned-income tax credit, that are targeted to the poorest Americans.

Senate Republicans, led by Senator Mitch McConnell of Kentucky, have called for the chamber to wait to evaluate the implementation of the nearly $2.8 trillion in legislation that Congress has already approved and Mr. Trump has signed into law. But senators have quietly begun to work on legislation that would toughen liability protections for businesses, nonprofits, and government agencies and health care workers against medical malpractice lawsuits, as well as ways to expand the ability of states to spend the state and local aid already allocated.

In a message to the House on Thursday, White House officials called the legislation insupportable and said it was “more concerned with delivering on longstanding partisan and ideological wish lists than with enhancing the ability of our nation to deal with the public health and economic challenges we face.”

Top Democrats had warned lawmakers that a vote against the legislation would carry grave political repercussions.

“If you vote against this and all this funding for your state, then you have to go home and defend it,” Ms. Pelosi told House Democrats in a private call on Thursday evening, according to multiple people familiar with her remarks, who described them on the condition of anonymity. “And if you can defend that ‘no’ vote, then you’re a better politician than me.”

But by Friday morning, multiple moderate Democrats had announced their intention to do just that.

In an interview, Representative Kendra Horn, Democrat of Oklahoma, said she supported parts of the package, but could not back it in its current form.

“This is a vote saying we need to do the work to get this bill where it needs to be,” she said.

The progressive flank of the caucus was also rankled by the bill, contending it did not go far enough to support workers in need of health care and regular paychecks. But the Congressional Progressive Caucus ultimately stopped short of encouraging its members to vote against the bill, even as one of its leaders, Representative Pramila Jayapal of Washington, announced that she would vote no.

“This is a crisis. People are really trying to figure out what they want to do, and I just want to respect that,” Ms. Jayapal said on Friday. “But at the same time, there’s a lot of frustration, both with the process and the content.”

“It’s hard to argue insufficiency in a small bill,” she added. “But this is supposed to be our vision.”