WASHINGTON — President Trump declared a national emergency on Friday over the coronavirus pandemic and announced steps he said would speed the availability of testing, and early Saturday, the House passed a bill reflecting a deal with his administration to provide billions of dollars to help sick workers and to prop up a slumping economy.

Markets rallied on Mr. Trump’s emergency declaration, which he said would free up $50 billion for states and localities to cope with the outbreak — separate from the congressional relief measure — and which would allow the Treasury Department to delay tax filing deadlines for some individuals and businesses.

During a news conference in the Rose Garden, the president also said he would indefinitely suspend interest collections on federal student loans, although no bills would go down. And he instructed the Energy Department to buy enough oil to fill the nation’s Strategic Petroleum Reserve “to the top.”

The S&P 500 soared during the remarks and closed the day up by more than 9 percent.

At the news conference, Mr. Trump followed none of the safety protocols recommended to combat the spread of the virus, shaking hands with multiple administration officials and chief executives and sharing a microphone with them.

He said his plan would speed the ability of Americans to be tested for the virus. It includes private partnerships to speed tests to the market and a website designed by Google, where Mr. Trump said potential patients could enter their symptoms and be directed to a drive-through testing center. The president said the site would be available starting on Sunday, with the goal of allowing all Americans who needed a test to get one “very safely, quickly and conveniently.”

But later, Google appeared to cast doubt on when or even whether that would be possible. A spokeswoman said that the initiative was in its “early stages” and would first be introduced as a prototype in the Bay Area.

The president, who has claimed that anyone who wanted a test could get one, also deflected any blame for the testing delays that have hampered the government’s response.

“I don’t take responsibility at all,” Mr. Trump said.

He brushed off questions about his own possible exposure to the virus. A Brazilian official who visited him last weekend at his Mar-a-Lago resort in Florida has since tested positive, but Mr. Trump said he had no symptoms and did not need to be tested. When repeatedly pressed on the matter, he said he was likely to be screened. “Fairly soon,” he said. “We’re working out a schedule.”

Yet around midnight, his physician, Sean P. Conley, said testing was “not currently indicated.”

The relief deal, whose cost is unclear, would allow for two weeks of paid sick leave and up to three months of family and medical leave for those affected by the crisis.

It provides tax credits to help small- and medium-size businesses finance the new benefit. It does not include the payroll tax suspension that Mr. Trump wants. Any such suspension could cost more than $800 billion and would not provide help to workers who lose their jobs or stop drawing salaries in the outbreak.

The announcements came as the pandemic’s ripple effects further slowed critical sectors of the American economy and interfered with daily life.

Schools across the country, including in Los Angeles and the entire state of Virginia, shut down. Delta Air Lines announced it would ground 300 aircraft and reduce capacity by 40 percent, the sharpest cutback in its history. Grocery store shelves were picked clean, and restaurants and retail stores braced for fall-offs in customer traffic as more Americans began to follow “social distancing” orders to avoid crowds and possible virus transmission.

The House voted overwhelmingly to approve the aid bill, which was unveiled minutes before midnight and passed 363 to 40 at 12:53 a.m. Saturday. Representative Justin Amash of Michigan, the chamber’s lone independent, voted present.

The bill includes enhanced unemployment benefits, free virus testing and additional funds for food assistance and Medicaid. Senators, who left Washington for the weekend on Thursday, are expected to take up the measure when they return next week. Mr. Trump has signed off on it.

Senator Mitch McConnell, Republican of Kentucky and the majority leader, said in a statement after the vote that “senators will need to carefully review” the bill passed by the House.

“But I believe the vast majority of senators in both parties will agree we should act swiftly to secure relief for American workers, families and small businesses,” he said. 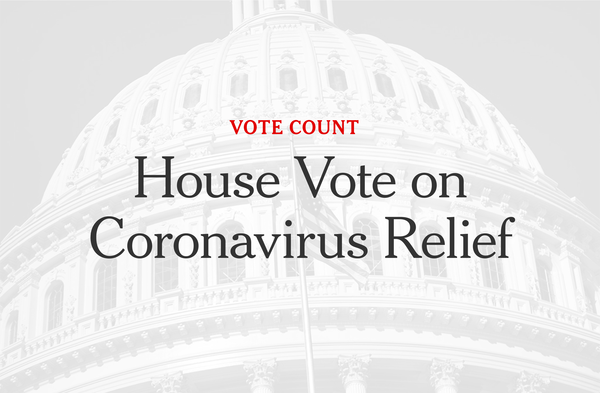 How Every House Member Voted on the Coronavirus Relief Bill

The shape of the paid leave benefit — and how many workers could have access to it — proved to be a sticking point in negotiations on Friday between Ms. Pelosi and Steven Mnuchin, the Treasury secretary. Democrats agreed to drop a provision that would have created a permanent paid sick leave entitlement in case of a public health emergency. Republicans sought to confine it only to people who were sick or caring for ill family or children kept out of school.

Ms. Pelosi characterized the bill on Friday evening as an intermediate step.

“As the Senate works to pass this bill,” she wrote in a letter to colleagues, “the House will begin work on a third emergency response package to protect the health, economic security and well-being of the American people.”

In Europe, officials announced a series of aggressive measures to support their economies and try to contain the virus’s spread.

The World Health Organization declared Europe the center of the pandemic. European Union officials announced they would allow member nations to run larger than normal budget deficits to stimulate economic growth. France and Germany announced their own stimulus plans, a particularly unusual move for the deficit-averse Germans, and Italy was expected to follow suit.

Mr. Trump’s moves and the aid bill was considered progress in the effort to slow the virus’s spread and minimize damage to the economy.

But they still fell far short of the steps that many economists say lawmakers must take to confront a crisis with little precedent in American history — one that is likely to require Mr. Trump to marshal a rapid bipartisan response.

His difficulty in doing so was evident on Friday. Shortly after stock trading closed for the day, the president cast doubt on the aid package that had been negotiated painstakingly by Ms. Pelosi and Mr. Mnuchin.

“We don’t think the Democrats are giving enough” in negotiations, he said. (Ms. Pelosi, asked why she didn’t speak to Mr. Trump about the bill, said that “there was no need for that.”)

A senior administration official said that the president was referring to the $1 trillion temporary cut in payroll taxes, an idea that lawmakers from both parties have viewed with skepticism.

Still, talks continued as the afternoon progressed. As Mr. Trump was criticizing Democrats, Ms. Pelosi and Mr. Mnuchin were speaking for the 10th time of the day about the legislation. Ms. Pelosi announced the deal after they concluded their 13th call, and shortly after Mr. Mnuchin met privately with the president to urge him to accept it.

In the hours after that, the deal seemed in peril as White House officials insisted they were still reviewing text and aides rushed to make technical changes.

“Look forward to signing the final Bill, ASAP!” Mr. Trump tweeted just before 9 p.m., giving the first indication that he backed the measure and wanted Republicans to vote for it.

Any delay could further imperil an economy that many forecasters are persuaded is entering a recession, caused by the damage the virus has already inflicted on global supply chains and the growing chill from homebound consumers pulling back on their spending.

Some economists say that to contain the spread of the virus, the country must effectively hit pause on entire sectors of commerce, like entertainment and dining, that bring Americans together in large crowds. Those economists say Congress and Mr. Trump must help workers and small-business owners weather that shock — and give them enough cash to help kick-start spending and hiring again once the virus is contained and daily routines begin to return to normal.

“The approach has to be, let’s make this as short and sharp as we can,” said Steven Hamilton, an economist at George Washington University who has recently called for policymakers to rethink traditional government stimulus efforts that focus largely on tax cuts or spending programs, and instead supply hundreds of billions of dollars in direct assistance to workers and small business owners.

“It’s the worst public health crisis in a century,” Mr. Hamilton said. “The world has never faced anything like this. The United States economy is going to need to shut — I mean, shut everything — for two to six weeks.”

That sort of abrupt halt in activity will particularly hurt small-business owners who lack the cash reserves or access to credit that larger companies enjoy. It will also slam lower-income workers, many of whom do not have paid leave, or work in industries like hospitality that are suffering acutely from the pandemic — or both.

By limiting the number of people gathering in common spaces, traveling by public transit systems, and coming into direct contact with one another, it may be possible to substantially slow the spread of the virus, experts say.

Studies of cities and states that have required employers to offer paid sick leave show substantially lower rates of influenza during flu season, a sign that the provision does reduce the spread of illness. Many economists, including conservatives and liberals, applauded the inclusion of a paid leave provision in the House bill.

“Good economic policy starts by ensuring that the humans in the economy stay well — and alive — so they can participate in the economy as both producers and consumers,” said Heather Boushey, the president of the Washington Center for Equitable Growth, a liberal think tank focused on inequality and growth. “We need to focus on this basic first principle right now.”

Mr. Trump sent mixed messages in his news conference about the size of the economic impact he was expecting, and about the steps Americans should take to avoid contracting or transmitting the virus.

He called upon Americans to make “short-term sacrifices” like avoiding large gatherings and postponing business travel, and he warned that the next eight weeks would be critical for slowing the spread of the virus.

“This will pass through,” Mr. Trump said, “and we’re going to be even stronger for it.”