WASHINGTON — House Democrats, moving to sharpen the distinction between themselves and Republicans as the coronavirus pandemic rages, passed legislation on Monday that would ensure that Americans paid no more than 8.5 percent of their income for health insurance and would allow the government to negotiate prices with drug makers.

The House passed the bill, voting almost entirely along party lines, just hours after the Trump administration announced it had secured 500,000 treatment courses of a newly approved drug to treat Covid-19, remdesivir, but at a price. The drug’s maker, Gilead Sciences, will charge $2,340 per course, after weeks of donating the drug to hospitals with severely ill patients.

At the White House, President Trump’s press secretary, Kayleigh McEnany, defended the arrangement, saying that because remdesivir is an inpatient drug given by infusion, patients are highly unlikely to have to pay for it and “hospitals have to eat the cost of treatment use.”

But the House legislation and the remdesivir announcement once again put a spotlight on the cost of health care as a political and economic issue. While the House bill has no chance of passing the Republican-led Senate, Democrats — who reclaimed the House majority in 2018 on a promise to lower health costs and expand access — intend to use it to reprise that playbook in November.

“Sadly, as we unveiled our lifesaving legislation last week, President Trump went to court to double down on his lawsuit to tear down the A.C.A.,” Speaker Nancy Pelosi said on the House floor before the vote. “At a time when families need health care more than ever, the president is trying to strip protections from about 130 million Americans with pre-existing conditions and take coverage away from 23 million Americans.”

The legislation would enable four million people to gain health coverage and make it more affordable for another 14 million, according to an analysis by the Center on Budget and Policy Priorities. Republicans argued that the bill wound hinder the development of new drugs and therapeutics by depriving drug makers of the profits they need for research and innovation.

“Our country currently leads the way in bringing new medications to market that would save lives and improve patients’ quality of life,” said Representative Phil Roe, Republican of Tennessee and a doctor, adding, “At this very moment American innovators are working at lightning speed to develop a Covid vaccine.” 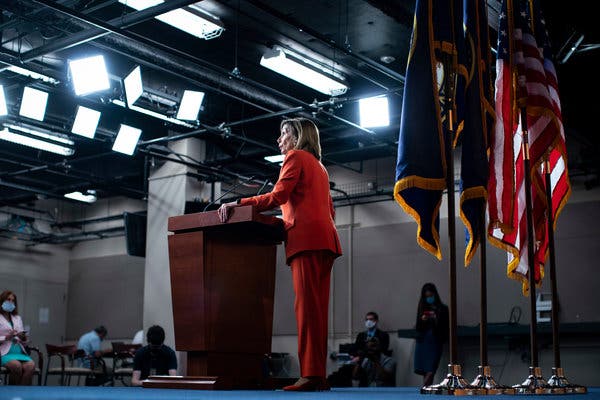 “Sadly, as we unveiled our lifesaving legislation last week, President Trump went to court to double down on his lawsuit to tear down the A.C.A.,” Speaker Nancy Pelosi said. Credit…Al Drago for The New York Times

While a broad expansion of the health law, commonly called Obamacare, is not in the offing this year, Mr. Trump and lawmakers in both parties have expressed strong interest in a narrower effort to control prescription drug costs. The remdesivir announcement might renew that push.

In the Senate on Monday, a new fight over drug price legislation broke out between Democrats and Republicans over a bill they drafted last year, which aims to limit how manufacturers like Gilead raise prices.

The bill would also cap the amount Medicare recipients pay every year for drugs. Senator Charles E. Grassley of Iowa, the chairman of the Senate Finance Committee, accused Democrats on the panel of abandoning negotiations over their legislation, which he said he hoped to include in the next coronavirus relief package Congress is expected to consider in July.

But the bill’s Democratic co-sponsor, Senator Ron Wyden of Oregon, shot back that Senator Mitch McConnell of Kentucky, the majority leader, had yet to schedule a vote on the bill.

“Democrats have not walked away from the table on drug pricing — Republicans never showed up in the first place,” Mr. Wyden said in a statement, adding: “Chairman Grassley and I have worked for over a year on a drug pricing bill that would end price gouging, lower consumers’ costs at the pharmacy counter, and save taxpayer dollars. I stand by that effort and maintain these policies are right on the merits.”

The bill that Mr. Grassley and Mr. Wyden wrote, which has been endorsed by Vice President Mike Pence and Alex M. Azar II, the health and human services secretary, does not give the federal government the power to limit the launch prices of drugs. But it caps the growth of drug prices in Medicare at inflation level, forcing manufacturers to pay back the difference — a move that could influence how much Gilead may choose to increase the price of remdesivir later this year.

One hurdle for Mr. Grassley and Mr. Wyden has been Mr. Trump’s attention span, which has only intermittently turned to drug pricing legislation, an issue that he campaigned on in 2016 and that the White House has pursued for more than two years.

In his State of the Union address in February, he called on Congress to “get something on drug pricing done,” singling out Mr. Grassley and telling him to “get a bill on my desk.”

Without any progress by mid-May, Mr. Grassley confronted Mr. Trump in a meeting with Senate Republicans, asking him whether he was still interested in signing a bill. The president was enthusiastic and said that the Senate had “no choice” but to pass one, according to a person in the room.

But the White House’s interest has lagged. Senate aides familiar with the negotiations say that Mr. Trump has yet to apply enough pressure on Mr. McConnell, and the senior White House official who had been working with Congress on drug legislation, Joe Grogan, left in late May. Mr. Grogan said on Monday that before his departure, he had been pushing for Mr. Grassley’s bill and had been working with lawmakers to insert it in one of the coronavirus relief packages Congress has already passed.

Mr. Grogan’s successor, Brooke Rollins, did not directly respond to a question about whether the White House was still working with Congress to find a solution, saying in a statement, “We are continuing to talk to individual Americans, small business, employers and health care leaders to identify any gaps that may need to be addressed in future legislation.”

A spokesman for Mr. Grassley said he intended to reintroduce his legislation “with or without Democrats.” One senior Democratic aide familiar with the conversations said Mr. Grassley was merely trying to reintroduce the legislation with new Republican co-sponsors, including some in close re-election races, and not negotiate the policy components of the bill, which were not expected to change.