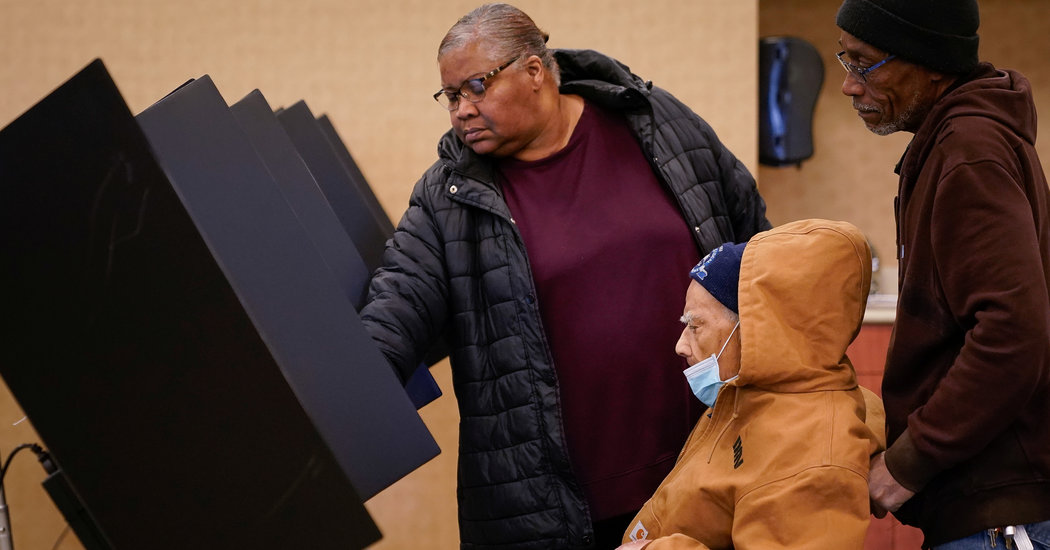 Elections officials in the next four Democratic primary states are taking extra precautions before voters head to the polls on Tuesday, as the coronavirus upends the 2020 race and people worry about gatherings and places where they might become infected.

There are no plans to cancel primaries in the four states — Ohio, Florida, Illinois and Arizona — and officials are expressing confidence that ballots can be safely cast. Each secretary of state has sent out regular updates, reiterating recommendations from federal officials about preventive measures to stop the spread of the virus, and encouraging voting by mail or early voting.

In all four states, the counties run the elections, but state officials have been trying to underscore the new basics of voting, like keeping hand sanitizer at polling locations and making sure local officials properly clean machines. At this point, none of the states are considering expanding polling hours or mail-in-ballot deadlines.

Some elected officials in states voting after Tuesday, however, have expressed concern about the safety of an election during the outbreak. In New York City, a city council member called on the city to postpone the special election for the Queens Borough President, which is scheduled for March 24th. “We cannot put our students, voters, and poll workers at risk,” Donovan Richards, the city councilmember and chair of the council committee on public safety, said in a statement.

And on Wednesday, Senator Ron Wyden, Democrat of Oregon, introduced a bill that would “require all states to offer an option for voters to mail in or drop-off a hand-marked, paper ballot” if more than a quarter of states declared a state of emergency because of the coronavirus.

Yet for the states voting on Tuesday, the preparations for voting in the age of a pandemic have not led to far-reaching changes. Perhaps the most significant shift will be the relocation of polling stations away from areas where older people live, like assisted living facilities.

Here’s a look at what is happening in each state.

Frank LaRose, the Ohio secretary of state, has directed all county election boards to relocate voting locations that are near places where a high concentration of older people live, and county officials have been working to find new polling sites.

On Wednesday, the county boards reported to the secretary of state’s office that they had identified 128 locations around the state that would need to be changed. In Hamilton County, home to Cincinnati, 26 polling locations have been moved.

Another worry is the availability of poll workers, a volunteer group that skews older, and whose absence on Election Day could lead to longer lines and bigger crowds. In Ohio, the secretary of state’s office said it had been “proactively requesting additional recruitment from state and local government employees, outside organizations and even college students to step up and serve Ohio as poll workers.”

“In fact, as of early this afternoon, we’ve had 582 Ohioans sign up to be poll workers just since Tuesday,” said Jon Keeling, the communications director for Mr. LaRose. “We’ve been thrilled with how many have stepped up.”

Two of the largest voting jurisdictions in Illinois, Cook County and Chicago, obtained a court order on Thursday that will allow the counties to issue vote-by-mail ballots to all nursing home residents in their jurisdictions. The order also removes the requirement to send election judges into nursing homes to conduct voting.

“Nursing homes around the state are withdrawing as polling places, so local election authorities are relocating polling places and sending out statutorily required notifications to affected voters,” said Matt Dietrich, a spokesman for the Illinois State Board of Elections. He said that included more than 100 locations in the Chicago area.

In Florida, which has also declared a state of emergency over the coronavirus, Gov. Ron DeSantis, a Republican, has urged county elections supervisors to move polling places out of assisted living facilities.

“That’s problematic,” he told reporters on Wednesday in Tallahassee, the state capital, adding that residents should still be able to vote there, but not the general public.

The state has temporarily restricted visits to nursing homes, assisted living facilities, adult family-care homes, long-term care facilities and adult group homes to keep out international and cruise ship travelers and other people who might have been exposed to the coronavirus.

In Broward County, where a small cluster of coronavirus cases has been tied to the Port Everglades seaport, the elections department plans to move six polling places out of assisted living facilities. Those locations asked for the change, but not all senior facilities have, in part because they want residents to have the convenience of voting there, said Steve Vancore, a spokesman for Supervisor Peter Antonacci.

The department has bought “oodles” of soap, paper towels, rubbing alcohol and wipes, he added. It already had a supply of gloves.

“We’re putting signs at every precinct encouraging everybody approaching to wash their hands,” Mr. Vancore said. “We have plenty of Purell hand sanitizer available. The poll workers are being asked and encouraged to wear gloves.”

Poll workers will be wiping down voting booths “as they can,” he said.

“We’re doing this in real time,” he said of the last-minute changes to cope with the virus. “We’re doing everything we can, and everybody’s working together to make sure the facilities are clean and people are aware.”

The Arizona secretary of state’s office has recommended that voters either cast ballots by mail, which should have been postmarked by Wednesday to be safe, or drop off a vote-by-mail ballot at a designated location before polls close on Tuesday. The secretary of state’s office also urged people to cast ballots in person at early-voting sites, which are open until Friday.

In a news release on Wednesday, Katie Hobbs, the secretary of state in Arizona, said she wanted to “remind voters to make a plan for participating in this election.”

In Maricopa County, the state’s largest and home to Phoenix, county officials had already made preparations for Election Day, including building a large pool of possible poll workers, though they anticipate receiving more than 80 percent of votes by mail.

“We have statutory minimum for keeping a polling place open, and we’ve staffed significantly higher than that,” said Adrian Fontes, the Maricopa County recorder. “We’ve already built in a pretty big cushion.”

Mr. Fontes said that officials planned to sterilize the voting machines every half-hour and would have hand sanitizer at every location. And while the virus may depress in-person turnout, he said, his county has already seen a surge in mail-in votes.