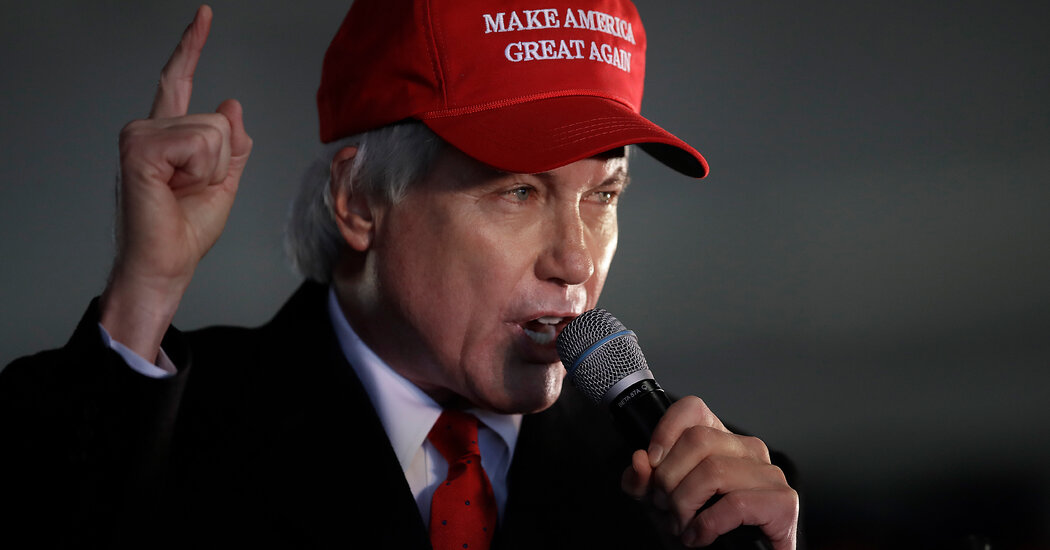 L. Lin Wood had a message from God to deliver.

“Don’t believe the media. They’re liars,” the celebrity defamation lawyer declared in October at a gathering of evangelicals in Atlanta.

Then he vowed, “We’re going to take them down,” bringing the crowd to its feet.

Mr. Wood’s speech to a packed ballroom at the Faith and Freedom Coalition’s annual conference was a preview of the role he would soon play as one of the most relentless promoters of President Trump’s conspiracy theories and baseless claims about election fraud.

It is a turn that has surprised many former associates of the theatrical lawyer, whom Dan Rather once described as “the attorney for the damned” for his roster of high-profile clients like Richard A. Jewell, who was wrongly suspected of setting off a bomb at the Atlanta Olympics, and the parents of JonBenet Ramsey, the 6-year-old whose murder became a tabloid frenzy.

But Mr. Wood has reinvented himself into an extreme Trump advocate, one who has found fame among Mr. Trump’s supporters not because he is good at notching victories for the president, but because he will amplify Mr. Trump’s wildest accusations and dive head first into the culture wars.

Mr. Wood’s lawsuits seeking to undo the election in Georgia and to ask the Supreme Court to overturn votes in other key states have been soundly rejected by judges and riddled with errors, including a misspelling of his own name.

Still, many Republicans have grown worried that Mr. Wood is harming the party’s chances of holding the Senate. His repeated suggestion that people should sit out the Georgia runoff elections to punish Republicans who weren’t sufficiently supportive of Mr. Trump led Newt Gingrich to condemn Mr. Wood as “totally destructive.” The editor of National Review described him as “an exceptionally talented demagogue.”

Ralph Reed, the chairman of the Faith and Freedom Coalition and a veteran of Georgia politics, said that control of the Senate was too important to squander.

“I like Lin. I think he’s a very brilliant guy and a first-class litigator,” Mr. Reed said. “But the stakes of the Senate races are too high to use them as a platform to express outrage about the results of the presidential election.”

Former colleagues described Mr. Wood as someone who shares many traits with Mr. Trump. He claims to loathe the mainstream media but has used it effectively to build his brand. He intimidates adversaries with lawsuits. And he thrives on shocking those around him.

Mr. Wood’s recent clients have included highly polarizing figures like Marjorie Taylor Greene, who supports the QAnon hoax and was recently elected to Congress; Mark and Patricia McCloskey, the St. Louis couple who brandished weapons at demonstrators outside their house; and Kyle Rittenhouse, the teenager charged with fatally shooting two protesters in Kenosha, Wis. He is also representing Nicholas Sandmann, a student whose encounter with a Native American protester made national news, in his libel suit against The New York Times.

Before the former national security adviser Michael T. Flynn raised the possibility with Mr. Trump of declaring martial law, the notion of enlisting the military to oversee a do-over of the election was an idea that Mr. Wood had floated in interviews with right-wing media.

Legal experts said Mr. Wood, who is well aware of what the law says about defamation and libel, appears to be betting that the targets of his most baseless claims won’t sue him because he is protected by the First Amendment and they don’t want the hassle. He has insinuated, for instance, that Chief Justice John G. Roberts Jr. may have associated with the now-deceased convicted sex offender Jeffrey Epstein.

And at a rally this month in Atlanta, where Mr. Wood appeared alongside Mr. Flynn and another pro-Trump lawyer known for pushing conspiracy theories, Sidney Powell, he accused Gov. Brian Kemp of corruption and led the crowd in chants of “Lock him up!”

His antics have earned him an audience with Mr. Trump. Mr. Wood said in an email that they had spoken about “fraud and illegality” in the election on more than one occasion, though he is not an official member of the president’s legal team.

Lawyers who have worked with Mr. Wood, 68, described him as animated and aggressive inside and outside the courtroom — someone known for showing up uninvited to the news conferences of his opponents and belittling witnesses in depositions.

But few who know him professionally said they expected him to descend into the miasmic swamp of right-wing conspiracy theories.

“The Lin Wood I see today bears basically no resemblance to the Lin Wood I knew back then,” said Timothy Terrell, a law professor at Emory.

Mr. Wood’s biggest break came in 1996 when he represented Mr. Jewell, a security guard wrongly suspected of planting a pipe bomb in Atlanta during the Summer Olympics that killed one person and injured more than 100 others.

For the next 20 years, he built a reputation as a pit bull plaintiff’s lawyer who sued the news media for a pantheon of aggrieved clients. He represented John and Patsy Ramsey in their struggle to clear their names in their daughter’s killing and the former congressman Gary Condit after the death of his intern Chandra Levy.

Though the defamation cases were headline-grabbing, his more lucrative legal work has been in areas like medical fraud and malpractice.

James Rawls, an Atlanta-based lawyer who helped Mr. Wood with some of the Ramsey family matters, said working with him was easy “when we were all on the same team.” But their relationship became untenable, Mr. Rawls said, because his firm, Powell Goldstein, had a large practice defending media companies and Mr. Wood was unwilling to stop attacking the media.

Mr. Wood was raised in Macon and experienced tragedy as a teenager, returning home one day to discover that his father — an abusive alcoholic — had beaten his mother to death. Watching the murder trial that followed inspired him to become a lawyer.

His professional life has been messy. His former law partners are suing him for unpaid compensation, alleging that he displayed bizarre, messianic behavior. They claim that he referred to himself as “Almighty Lin” and indicated that, according to a “prophecy” he saw on YouTube, he expected to be named chief justice of the United States.

“I have assessed my mental health,” he wrote in an email to his partners that is cited in the suit. “I am a little crazy, but I’m also mainly sane and possess a healthy mind.”

Mr. Wood contends that the suit is “littered with false statements and completely irrelevant factual allegations.”

After his speech at the Faith and Freedom event, Mr. Wood returned to his seat on the dais and his date, the Fox News host Jeanine Pirro, jumped up to hug him.

Mr. Reed, the M.C., raised his voice to be heard over the applause.

“Thank you for bringing the thunder, Lin,” Mr. Reed said.