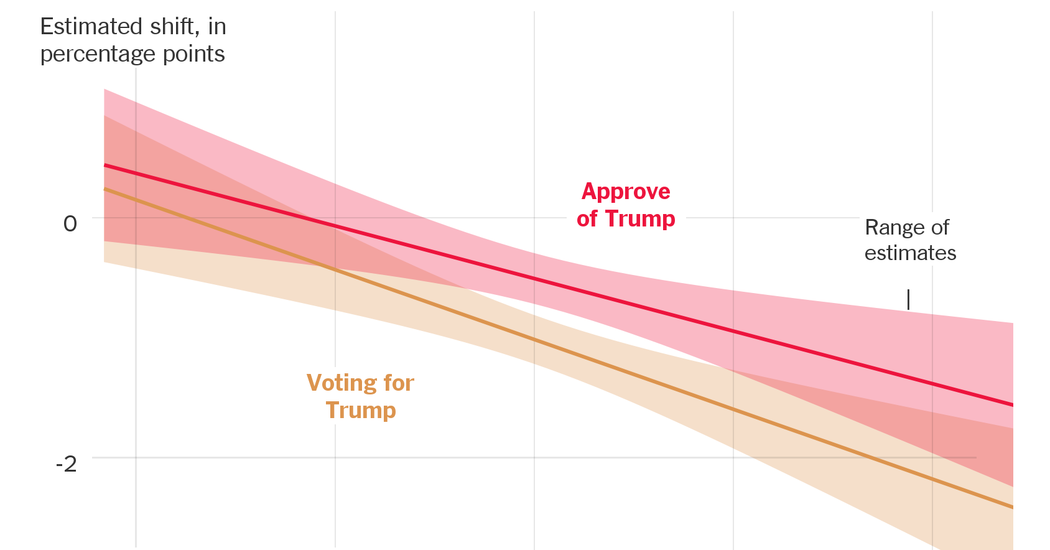 On March 18, Donald J. Trump declared himself a wartime president against “the invisible enemy” of coronavirus and invoked the Defense Production Act. Now he’s facing a downside of presiding over a war: American casualties.

In the days since that pronouncement, Covid-19 has taken the lives of almost 150,000 Americans, many more than have died in recent wars combined. Data from over 328,692 interviews in 3,025 counties across the nation suggest that coronavirus-related deaths, like casualties of war, are hurting the president’s approval rating and may cost him and his party votes.

The gap between stated voting support for Mr. Trump and Joseph R. Biden Jr. grows by about 2.5 percentage points in Mr. Biden’s favor when a county has extremely high levels of coronavirus-related deaths relative to when it has low levels. These changes may come within counties as the number of virus-related deaths change, or across counties at any given point in time. For example, Covid-19 fatalities exploded in Wayne County in Michigan in April, suggesting a 1.25-point expansion of the gap between Mr. Trump and Mr. Biden, which could grow larger if deaths there continue to increase.

Cases in Maricopa County, in Arizona, have nearly quadrupled in the last two months, suggesting an 0.6-point increase in the vote support gap between the candidates. Other places have seen little impact from Covid-19, such as Wyoming and some Plains states. Our data show that Mr. Trump has continued to do well in those states, perhaps even increasing his share of the vote in recent months.

Republicans running for the U.S. House and Senate lose just as much support as Mr. Trump does when deaths rise locally. It may feel as if all politics is national, but it is not.

Research shows that when people are killed in action during wartime, residents of the place the victims are from tend to hold elected leaders in Congress and the White House accountable. Political scientists have found this to be true for midterm and presidential elections during the Civil War, the Vietnam War, and the wars in Iraq and Afghanistan. Coronavirus-related deaths seem to be having a similar effect.

It’s also true that partisan leanings have influenced views on the nation’s current crises. July data from the Pew Research Center show a wide divide between Democrats and Republicans on coronavirus. Only 46 percent of Republicans say the outbreak is a major threat to the health of the U.S. public, compared with 85 percent of Democrats who do.

Still, reactions to the pandemic are about more than being a Democrat or Republican. The front lines of the fight against Covid-19 are in local communities where sick people try to get tested and endure quarantine; where some succumb to the disease, often alone; and where doctors fight to provide care.

To understand whether these community-level experiences are affecting people’s views of the president and his party, we need local-level data on both Covid-19 deaths and people’s views of Mr. Trump and his fellow Republicans over time — as the death tolls change place to place. This is a challenge; a typical poll of 1,000 people cannot deliver sufficiently granular data. There are more than 3,000 counties in the country, and the death tolls are changing in each of them in different ways every week.

The Democracy Fund + U.C.L.A. Nationscape Project has been interviewing 6,250 people a week since July 2019. To date, there are more than 300,000 completed interviews spanning every state in the country and most counties. The survey is conducted online and is fielded by the market research firm Lucid.

The data contain more cases in big places like Los Angeles County than in small ones, like Grafton County, N.H., but there are enough people in counties with varying rates of Covid-19 deaths over time to investigate whether a relationship exists.

For our analyses, people in the survey are assigned their county’s per-capita 60-day cumulative number of Covid-19 deaths. The 60-day period is that just preceding the date each person was interviewed. In this way, we capture variation in county-level deaths within counties because people in the same county are interviewed on different days.

Similarly, because people have been interviewed all over the country on the same dates, we also have captured variation across counties at the same moment. Some counties had high Covid-19 death rates in April, while others did not. As we moved into May and June, a different set of counties experienced rising rates. The goal is to figure out whether the differences in Covid-19 deaths per capita in a county at a given point in time is affecting how people plan to vote in 2020 and how they rate the president. (We also try to account for possible confounding factors that might also be changing broadly at the same time: See more on the methodology at bottom.)

A doubling of cases per capita in a county over the last 60 days drops Mr. Trump’s two-party vote margin against Mr. Biden by a third of a percentage point — a seemingly small gap, but not when you consider that several recent elections have been won by narrow margins. In 2016, the critical state of Michigan was won by less than a third of a point; Wisconsin and Pennsylvania were won by less than a point. And some places are seeing a tripling or quadrupling of cases.

The news for Republicans running for the House and Senate is equally bad.

A number of swing Senate elections are in states that have experienced recent rises in Covid-19 cases, including Georgia, Arizona and North Carolina. In Arizona, for example, the gap between Senator Martha McSally, the Republican, and her Democratic challenger, Mark Kelly, continues to grow as the state has surpassed 3,300 virus-related deaths (up from 941 on June 2). Local virus fatalities are costing Republicans running for Senate as much as they are costing the president, in a year when Republicans are fighting to hold on to a majority in the chamber.

There are less than 100 days until Election Day, and many Americans will vote even earlier. Voters appear to be holding the president and his party accountable for the increasing number of deaths in communities around the country. Reducing the toll of the virus is in everyone’s best interest in terms of public health. For Republicans, it is also crucial to their electoral prospects.

More on the methodology: The data on virus-related deaths come from The New York Times coronavirus tracking project, which we merge to the Nationscape survey data by county. We tried to account for other factors that might be changing everywhere at the same time, like the Black Lives Matter protests, or things that might be specific to one particular county, like its pre-existing level of support for the president. We use a method that controls for these differences across time and across counties, helping us to isolate the effects of Covid-19 deaths on vote. (We also account for some things about the people in the surveys, like their age, race, gender, ethnicity, education and 2016 vote choice).

By doing this, we try to be sure that the relationships we’ve uncovered aren’t being driven by characteristics of the people we have interviewed or things like how many Democrats live in a county or the fact that case counts went up at the same time protests swept the nation in many places. The details of our analyses are laid out in a paper we’ve written with the U.C.L.A. Ph.D. student Ryan Baxter-King. You can read more about the Nationscape methodology here.

Lynn Vavreck, the Marvin Hoffenberg Professor of American Politics and Public Policy at U.C.L.A., is a co-author of “Identity Crisis: The 2016 Presidential Campaign and the Battle for the Meaning of America.” Follow her on Twitter at @vavreck. Christopher Warshaw is Associate Professor of Political Science at George Washington University. Follow him on Twitter at @cwarshaw.