WASHINGTON — The abrupt uprooting of the Republican National Convention from Charlotte to Jacksonville has created a tangled financial predicament for party officials as they effectively try to pay for two big events instead of one.

Tens of millions of dollars have already been spent in a city that will now host little more than a G.O.P. business meeting, and donors are wary of opening their wallets again to bankroll a Jacksonville gathering thrown into uncertainty by a surge in coronavirus cases.

Organizers are trying to assuage vexed Republicans who collectively gave millions of dollars for a Charlotte event that has mostly been scrapped. The host committee there has spent virtually all of the $38 million it raised before the convention was moved, leaving almost nothing to return to donors, or to pass on to the new host city.

In Jacksonville, fund-raisers are describing the process as the most difficult they have ever confronted: Florida has been setting daily records for new virus cases, freezing money as donors wait and worry about the safety risks of the pandemic.

“I don’t want to encourage people getting sick,” said Stanley S. Hubbard, a Minnesota billionaire who has donated more than $2 million to help Republicans, including President Trump, since the beginning of the 2016 election.

Mr. Hubbard, who donated $25,000 to the R.N.C.’s convention account in 2018, is hesitant to give to the Jacksonville host committee because he thinks it is ill advised to hold the convention in the midst of a pandemic. “Unless this thing goes away, I think it’s a bad choice,” he said.

The threat of the virus and the complicated financial entanglements are just the latest problems to beset an event that Mr. Trump upended last month, after concluding that Charlotte could not guarantee the celebratory coronation he covets. The sudden acrimonious split with Charlotte — and the scramble in Jacksonville to organize in weeks an event that typically takes years — has produced mounting confusion about what the convention will look like and who will pay to help stage it.

Organizers are not holding their breath for generous contributions from big donors, like Sheldon Adelson, the billionaire casino owner, who has given to host committees in the past but has not indicated he plans to support the Jacksonville event. Instead, they are working down long lists of donors who might be willing to give smaller amounts.

But the virus has proved a debilitating impediment for Jacksonville. Florida had recorded almost 180,000 total coronavirus cases through Friday, but the surge in the last month has been dramatic. After reporting 667 new cases on June 1, the state has had more than 5,000 every day since June 24, including more than 10,000 on Thursday. Hospitals across the state have started to sound the alarm about becoming overburdened.

Mr. Trump shunned Charlotte because North Carolina’s Democratic governor, Roy Cooper, would not promise to forgo safety measures like distancing and mask-wearing. In Florida, lawmakers had seemed intent on offering him as unfettered a convention as possible, though in recent days the city of Jacksonville began requiring masks in indoor public settings, a stipulation that will presumably apply at the convention.

Dan Eberhart, a Republican donor who has helped raise money for Mr. Trump in the past, said the Jacksonville convention was “a tough sell,” noting that “many donors’ businesses are severely impacted by the virus and large corporations have pulled in their horns on spending.”

Mr. Eberhart is planning to attend the convention, and said he had been approached by the Jacksonville host committee about donating, but hasn’t decided whether to do so. “There are so many variables right now,” he said.

By the time Mr. Trump decided to move the convention, almost all of the money raised by the Charlotte host committee had been spent on things like salaries, insurance, prepayments on contracts, and other expenses.

Mr. Burr said it was still far from clear exactly what the final run of show will look like, or how many people will attend Mr. Trump’s renominating speech, which is scheduled for Aug. 27. Even some members of the host committee in Jacksonville are privately wondering if the city and the R.N.C. have a Plan B — actually, a Plan C — as they watch the number of coronavirus cases in their state rise.

“This path is a twisty path,” Mr. Burr said. “A lot of things continue to change.”

“I’ve got plenty of friends who said this is a bad thing to do,” he added, “but we are doing it.” 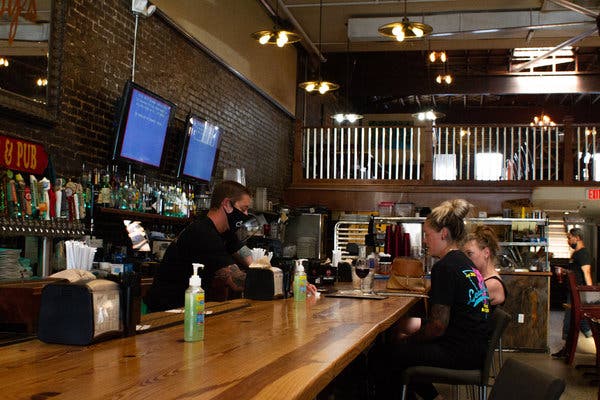 The average economic impact of hosting a convention is about $200 million, and officials in Jacksonville initially estimated that even a hurried version of the Republican event would bring in at least half of that.Credit…Malcolm Jackson for The New York Times

Ronna McDaniel, chairwoman of the Republican National Committee, which supervises the convention, said in a statement that her team “will be providing a safe, first-rate experience for convention goers, and we have a highly-skilled team working around the clock to make that happen.”

And Republican officials compared the mad cash dash to a special election, when a condensed time frame creates anxiety, but ultimately the money comes through.

Brian Ballard, the top Republican lobbyist in Florida and one of the party’s major fund-raisers, has been leading the fund-raising operation, along with Katie Walsh, an adviser to the R.N.C. who also helped oversee fund-raising for Charlotte, and Jeff Miller, a leading fund-raiser for Mr. Trump’s re-election campaign.

Big corporate donors who typically make $1 million contributions do so because they want to capitalize on social and branding opportunities at an event that draws lawmakers, lobbyists and business leaders. But right now, it’s not clear to them what the Jacksonville proceedings will look like.

As they start from scratch, fund-raisers are also being delicate about asking Charlotte donors to give again for the Jacksonville run. In an effort to smooth over raw feelings, donors who have already contributed will be able to use any of the perks that came with their donations — like V.I.P. access and reserved hotel rooms — in Jacksonville.

“There’s deep frustration,” said Tariq Bokhari, a Republican City Council member in Charlotte, describing exasperation among prominent local donors. “There are people who’ve put hundreds of thousands if not millions into this. They care that their investment comes to fruition, that our city hosts a major convention and our businesses and hospitality workers get the benefits.”

Organizers in Jacksonville are expecting — hoping — that 15,000 people attend, enough to fill the VyStar Veterans Memorial Arena, which cost about $150,000 for the week (a fraction of the cost of the arena in Charlotte). Still, many delegates remain noncommittal about attending, potentially diminishing the economic boost Jacksonville was counting on.

Perhaps taking that into account — and working on a far tighter timetable — Jacksonville organizers have expressed more modest fund-raising goals, aspiring to raise a fraction of the $70 million Charlotte officials aimed for.

The Democratic National Convention, scheduled for mid-August in Milwaukee, has already scaled back its ambitions: Organizers have relocated the event to a smaller venue, and state delegations have been urged not to travel in light of the virus.

In 2016, organizers of the Republican convention in Cleveland spent more than $1 million on national fund-raising consultants as they sought to hit their donation goals; they wound up raising about $60 million.

“It was all based on the contract signed two years out that we had spent months negotiating, and months before that understanding what the obligation would be for Cleveland,” said David Gilbert, who organized the 2016 Republican gathering.

Some Republican donors said that, like Mr. Trump, they blamed Mr. Cooper, North Carolina’s governor, for foiling the plans for Charlotte.

“You see the convention go to another state and you know they’re going to reap the benefits, and we desperately needed that,” said Elaine Wordsworth, whose husband, Steve Wordsworth, is a North Carolina businessman who has donated generously to Mr. Trump’s re-election fund.

Indeed, when Jacksonville was selected as the host city for the convention in June, the news was seen by leaders there as a huge financial shot in the arm for a second-tier city that would never have been considered for such a role under normal circumstances. The average economic impact of hosting a convention for the local economy is about $200 million, and officials in Jacksonville initially estimated that even a hurried version of the Republican event would bring in at least half of that.

But now, many of the people involved in the process in Jacksonville are beginning to feel like the dog that caught the car. About 58 percent of registered voters in Duval County, which encompasses Jacksonville, say they are opposed to the city hosting the mass gathering, according to a new poll from the University of Florida, which also showed that 71 percent of voters said they were at least somewhat concerned about transmission of coronavirus.

For Republican officials, untangling the financial knot from the Charlotte convention remains a work in progress. Given the contracts that had been signed and the many parties around the table — including the local host committee, the R.N.C. and the city itself, among others — concerns about potential legal action have figured into managing the fallout, several people connected to the process said.

Patrick Baker, Charlotte’s city attorney, said in an interview that the city itself had spent roughly $14 million preparing for the convention. Much of that went toward insurance and security costs, he said, and the city expected to be reimbursed in full through a federal grant from the Justice Department.

“The focus of the City Council has been to make sure, at a minimum, that we’re made whole and not left holding the bag,” Mr. Baker said.

The Charlotte program has been scaled back to the bare minimum. Only the 168 national committeemen are expected to visit Charlotte. While there, they will attend meetings at one hotel and then take a bus together to the airport, where they will board a chartered plane and fly to Jacksonville for the remainder of the convention, according to someone briefed on the plans.

It’s not clear that Charlotte has gotten the message that the party has fully moved to Jacksonville. The web address 2020venues.com still reflects a full Charlotte program, referring visitors to an array of destinations and assisting them with details for booking.

“The economic benefit that comes with all the visitor spending, obviously we’re not going to get that, but with the virus we weren’t going to get it anyway,” Mr. Baker said. “I’m glad it’s not my job to put on a convention.”