LEXINGTON, Ky. — Senate Democrats thought they had it all planned out.

Maybe they couldn’t defeat Senator Mitch McConnell, their legislative bête noire, in Kentucky this November. But by nominating Amy McGrath, a former Marine fighter pilot who earned a national following in a close 2018 House race, they figured they could keep the race relatively competitive, raise a Brinks truck full of cash against the majority leader and perhaps draw some extra money for their efforts to reclaim the Senate.

Then came the fatal police shooting of Breonna Taylor, who was shot eight times after officers entered her apartment in Louisville with a battering ram. And suddenly everything changed.

Ms. McGrath now finds herself in a rapidly tightening race against Charles Booker, a 35-year-old African-American state representative who was tear-gassed by the police at a recent protest

With just over a week until the Democratic primary, the fury in Kentucky over Ms. Taylor’s death, uncertainty about voting in a pandemic and a host of late endorsements from progressive leaders have provided fresh momentum to Mr. Booker’s candidacy — upending a nominating contest few in the national party were even following last month.

Polls indicate Mr. Booker is closing the gap against Ms. McGrath, even though she had raised nearly $41 million to his $788,000 as of the start of the month. Since then, though, he has raised almost $3 million.

“I’m traveling Kentucky talking about structural racism and I’m seeing folks, even 99 percent white, putting their fists in the air because they know that we can’t let this moment pass,” Mr. Booker, clad in a “No More No Knocks” T-shirt, recounted to a multiracial audience on Saturday in Lexington.

Then Mr. Booker asked the college-town crowd — a mix of local black residents, former University of Kentucky athletes and white students and faculty in Wildcat tailgating chairs — to raise a fist. And they did, some seemingly for the first time.

Ms. McGrath’s mammoth fund-raising advantage and the decision by a number of Kentucky Democrats to cast early ballots may still propel her to victory.

But that Mr. Booker could make the primary competitive at all illustrates the increasingly progressive tilt of the Democratic Party, as outrage over racial injustice amplifies the calls for transformative change. An unabashed progressive, Mr. Booker is running on “Medicare for all” and the Green New Deal. 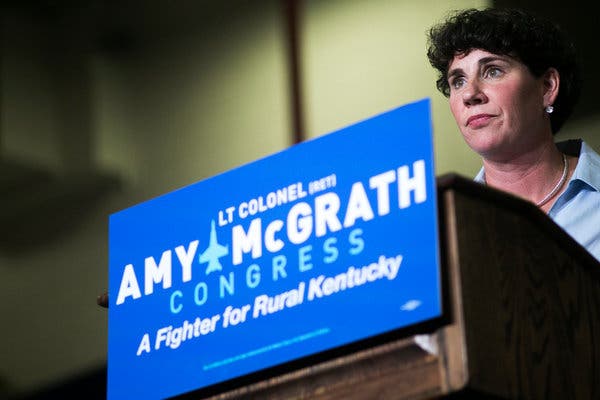 Amy McGrath, who lost a congressional race in 2018, has raised nearly $41 million for her Senate campaign.Credit…Maddie McGarvey for The New York Times

More significantly, this contest foreshadows the difficultly that establishment-aligned Democratic leaders like Senator Chuck Schumer may have with their restive base should the party’s most powerful force for unity, its loathing of President Trump, be eliminated by the time the 2022 midterms roll around.

The ascendant left could prove especially formidable if, as in Kentucky and New York this year, they keep rallying behind nonwhite insurgents who are able to build coalitions between liberal whites and racial minority groups.

“You’re going to see young people, people of color, working-class people participating in the Democratic Party in a way that we have not seen for a very, very long time,” predicted Senator Bernie Sanders, who, along with Senator Elizabeth Warren and Representative Alexandria Ocasio-Cortez of New York, has gotten behind Mr. Booker . “That is not going to be able to be controlled by the Democratic establishment.”

Kentucky, then, amounts to something of a dry run for the left, a test of whether grass-roots energy can overcome fearsome fund-raising, and whether Mr. Schumer’s ability to keep coronating candidates from Washington can be sustained should Democrats take full control of the government, and liberals grow frustrated with the glacial pace of the upper chamber.

Harry Reid, the former Senate Democratic leader who is not taking sides in the Kentucky race but who called Mr. Booker “a terrific candidate,” said Mr. Schumer would face considerable pressure to eliminate the 60-vote threshold in order to pass the sort of sweeping legislation many in the party are demanding.

No matter who wins the Kentucky primary on Tuesday, he or she will confront an uphill race against Mr. McConnell in a state that Mr. Trump carried by about 30 points four years ago. Even with his poll numbers plummeting, Republican and Democratic surveys still show the president enjoying a comfortable, double-digit advantage in Kentucky.

The more consequential question, though, is determining how to run r in a red state against a figure like Mr. McConnell, who, in addition to being the second-most detested man in blue America, is the architect of the modern Kentucky Republican Party and, at 78, is determined to serve at least one more term.

In an interview outside a forum on race relations she attended in Lexington, Ms. McGrath, 45, said that “most Kentuckians believe in common sense approaches to solutions” and are “tired of the partisanship.”

She has stressed her military service, as she did in her well-funded, if unsuccessful, House race, while also highlighting her role as a mother. But Ms. McGrath has irritated some Kentucky Democrats with her attempts to veer to the political center. She indicated she would have supported the confirmation of Justice Brett M. Kavanaugh to the Supreme Court before quickly reversing course, and has even argued that Mr. McConnell is an impediment to Mr. Trump’s agenda.

The winner of the Democratic primary will confront an uphill race against Senator Mitch McConnell, left, in a state that President Trump carried by about 30 points four years ago.Credit…Erin Schaff/The New York Times

“It’s the same playbook that loses every time,” Mr. Booker said in an interview, referring to Ms. McGrath’s approach. “This political B.S. that says the only way you can beat him is just raise a whole lot of money, flood the airwaves, don’t talk about real issues, don’t talk about poverty.”

He flatly declared that she would lose to Mr. McConnell, while Ms. McGrath declined to predict that Mr. Booker would face the same fate. She did, though, note the breadth of her coalition, arguing that to win the general election, “We need support from all around Kentucky.”

Mr. Booker, who likes to point out that he is from Kentucky’s poorest ZIP code, said such rhetoric is a thinly veiled suggestion that his support is limited to his native Louisville and other black enclaves in the overwhelmingly white state.

The idea, he said, is that “if you look like I do, and you come from where I come from, that you don’t connect to Appalachia.”

The former state House speaker Greg Stumbo, an institution in eastern Kentucky politics, said the swelling crowds for Mr. Booker in rural communities like his own indicated otherwise.

“My buddy Charles Booker is in the right place at the right time,” said Mr. Stumbo, who is white. He expressed awe at the crowds showing up for Mr. Booker and for Black Lives Matter rallies “in a place like Prestonburg, Ky., which as far as I know there are no African-Americans living within the city limits.”

Interviews with voters at protests in Louisville and Lexington last weekend revealed considerable support for Mr. Booker across racial lines — and in part because of his own participation in the demonstrations.

Cameron French, 21, and his two siblings said there was similar enthusiasm in the mountains of their native Wolfe. County

“We’re all three from eastern Kentucky and we’re seeing Black Lives Matter protests across eastern Kentucky,” Mr. French said at the Lexington rally shortly before posing for a picture with Mr. Booker.

Mr. Booker is trying to capitalize on the protests with a new ad featuring Ms. McGrath’s stilted answer from a recent debate, in which she conceded she had not been to any demonstrations.

Ms. McGrath has responded with a new spot of her own that invokes the killing of George Floyd while in Minneapolis police custody — but also somewhat awkwardly tries to tie him and his dying pleas for his mother to her own message.

Mr. Booker would be the first African-American candidate to be nominated by Kentucky Democrats to statewide office.Credit…Erik Branch for The New York Times

“Everyone is someone’s child and as a mom I will never forget that,” she says in the ad.

No congressional candidate has ever raised so much money only to lose a primarybut some forces in Kentucky are rallying against her, while others are staying notably quiet.

Despite her missteps, and the notable lack of public support from state leaders, Ms. McGrath enjoys not only a financial advantage, but also an assumption among many voters that she’d run more closely against Mr. McConnell.

“Her military background is very appealing to folks, this is a more conservative state,” said Mairead Moloney, a University of Kentucky professor who attended the race forum.

Jimmi Nicholson, who also works at the university, said that she was supporting Mr. Booker but that he probably could not win the general election because “it’s Kentucky and he’s an African-American male.”

Joni Jenkins, the state House minority leader and a Booker supporter, said that Mr. Booker’s authenticity was more important than his race.

“Some of us elected officials run not to lose and play the safe game, but there ain’t nothing safe about Charles Booker’s campaign,” Ms. Jenkins said.

That, of course, is what worries leaders like Mr. Schumer, who Mr. Booker said has not reached out to him.

The Senate Democratic leader repeatedly pressed some prominent Kentucky Democrats to help him squelch a primary challenge to Ms. McGrath, admitting privately that she would not be a top-tier candidate, but that they could use her to raise money against Mr. McConnell and keep him pinned down in his own race, according to officials familiar with the conversations.

Speaking to reporters on Tuesday, Mr. Schumer expressed confidence in Ms. McGrath, but also nodded at how pleased he was that the race was diverting G.O.P. resources. “The Republican super PAC put $10 million into Kentucky,” he said, alluding to the Senate Leadership Fund.

Ms. McGrath may still hang on. It was not difficult to find voters who had already cast their absentee ballots for her. And to protect people from the coronavirus, Mr. Booker’s hometown, Louisville, will only have one polling place on Tuesday.

Yet requests for absentee ballots have soared, particularly in the two largest cities, where store after store displays signs honoring Ms. Taylor.

Mr. Booker mentioned her name at the Lexington rally, vowing to make her and other black people killed by the police proud.

“The whole country is looking to see how we lead in this moment, and we’re showing them just what Kentucky does,” he said.