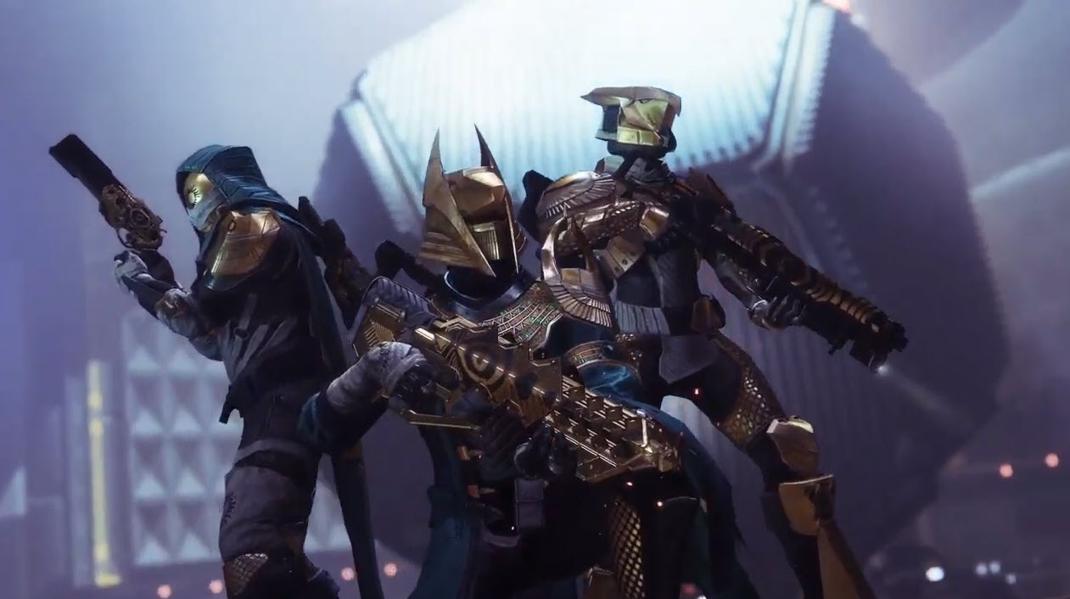 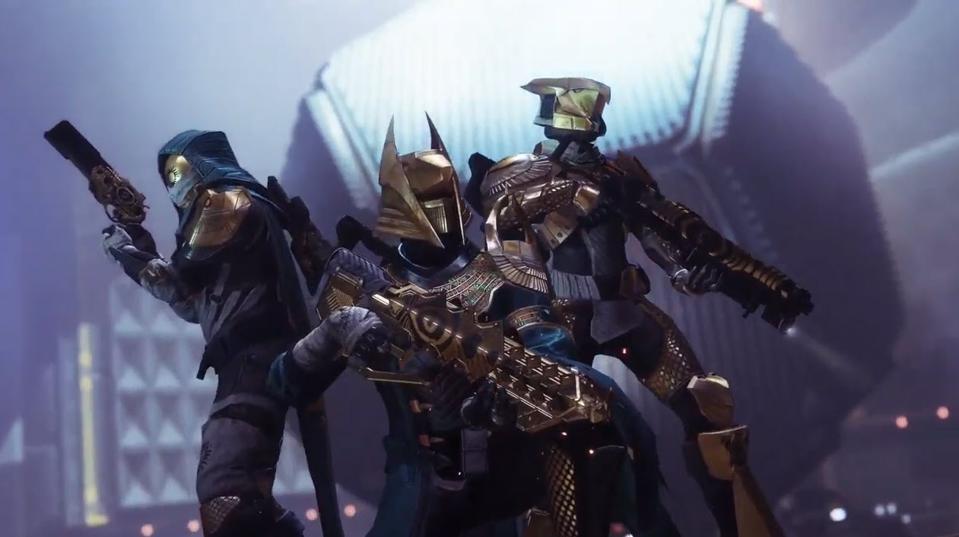 Now that Trials of Osiris has officially been confirmed for Destiny 2 next season, it’s time to start preparing for it. And that means farming some weapons.

Everyone has their own takes on the best PvP weapons, but today I’m just going by the data, what’s the most popular. I got these stats, as ever, from Charlemagne, and again, keep in mind that there is probably going to be some stuff you like that’s missing. Off the top of my head I’m surprised not to see things like Blast Furnace or Mountaintop or Last Hope make these top ten lists for each category, but these also can rotate depending on how the wind blows. This one is at least a couple days old.

For now, we have the top ten weapons in each slot, as ranked by use. I have written brief summaries about them along with how to get them, and recommended rolls. Only a select few are actually hard to get, though finding the right roll on some of the legendaries may be a struggle. Some of my top picks are definitely in here, but again, your personal favorites may be missing. This is more for PvP players who are newer rather than veterans who already have their loadouts done. And also keep in mind we don’t know the full extent of all the coming nerfs and buffs. With all that said, here we go. Remember, these are in order of popularity, not like, what’s empirically best because that’s sort of impossible to quantify: 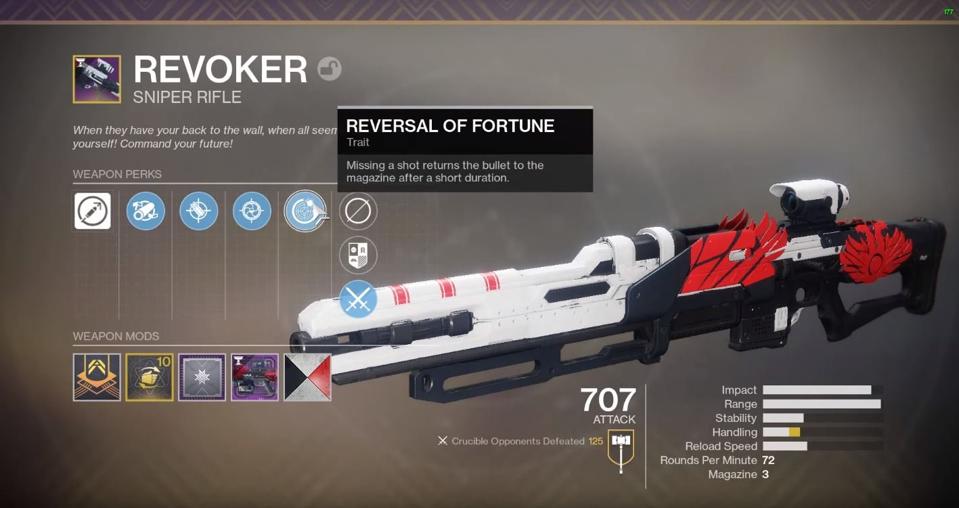 1. Revoker – You are going to see a whole of lot Revoker in Trials. It’s already strong and none of the sniper nerfs have affected it in the least in PvP. It’s a pinnacle weapon where you need 300 sniper kills (double progress during Iron Banner) and get 3500 total Glory. Even as a bad sniper, I managed to get this during this past season.

2. Crimson – Crimson got stealth buffed a little while ago and now it’s kind of a monster PvP exotic in this slot. It’s a random world drop, as is the catalyst, which should not be hard to find, but masterworking it is a must. Xur also sells this.

3. Bygones – My favorite pulse rifle in the game, I am a little sad I am not being original by using it in the Crucible. You can grind these out endlessly by using Fractaline bounties for Season of Dawn right now. Otherwise it’s a random Gambit drop. God roll is Outlaw/Kill Clip or Outlaw/Rampage.

4. Spare Rations – All the rage right now and should remain strong in Trials over other legendary hand cannons. The only place to get this is a random Gambit drop or you can farm it in Reckoning, but it takes forever. God roll you’re looking for is Rapid Hit/Kill Clip or maybe Rapid Hit/Rangefinder with High Caliber Rounds.

5. Dust Rock Blues – The kinetic shotgun is a hugely popular pick in Crucible. You can farm it from Menagerie with the Wealth/Any Blue Rune combo. God roll is Rifled or Full Choke with Slideshot and maybe Full Auto.

6. Randy’s Throwing Knife – Ritual weapon from last season. Get a lot of scout rifles kills and then get a total of 2100 glory which is easy. It’s a very, very good choice.

7. The Last Word – This is getting nerfed, but if you use it like you’re supposed to, hip-firing it, you should be okay. This is a full exotic quest and you can find out how to do that here.

8. Thorn – Thorn is going to be very, very strong and popular in Trials. Again, it requires one of the tougher exotic quests in the game, but not as tough as it was in Destiny 1. Find out how to do that here.

9. Arbalest – This is a random exotic drop these days and I think it’s only really this popular because people are using it to get the Komodo ritual weapon this season. But who knows, it is a one hit headshot, so we’ll see if it gets used.

10. MIDA Multi-Tool – MIDA is one of the shortest exotic quests in the game, and a forever popular choice in Crucible due to its movement speed increase and ability to always have radar up. You will never get the catalyst which is locked behind Legend Crucible, but it sucks anyway, so no great loss. 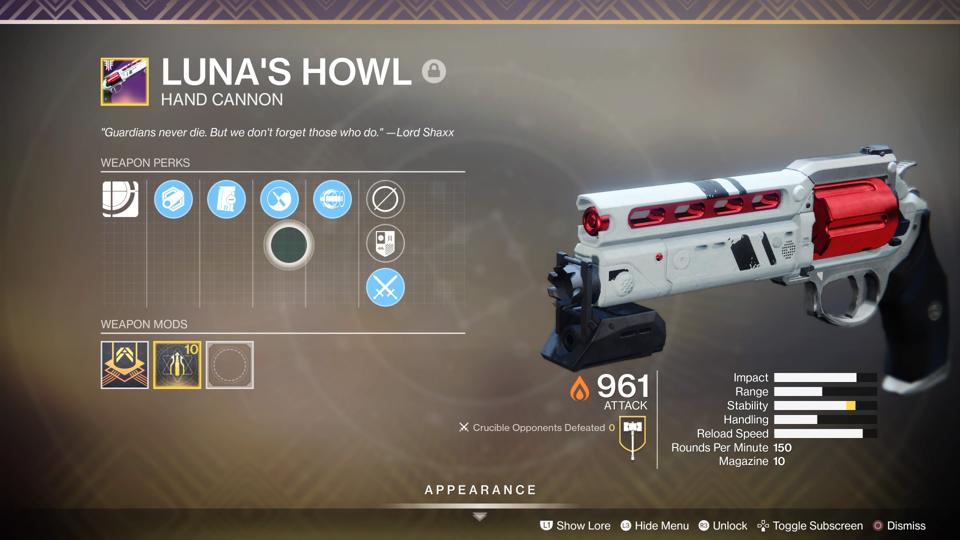 1. Luna’s Howl – A pinnacle weapon, and one of the longest quests in the game, which I only recently just finished after 1.5 years of slogging through it. Not Forgotten is the preferable alternative, but you have to start with this. Here are the quest steps.

2. Mindbender’s Ambition – The shotgun everyone loves to hate is getting somewhat nerfed next season, but for now, it’s not a bad idea to have one. It’s strike specific loot with a 20% drop rate in the Hallowed Lair Nightfall. God roll is Slideshot/Quickdraw. I settled for Threat Detector/Quickdraw/Full Choke/Assault Mag.

3. Not Forgotten – The better version of Luna’s which fewer people have. If you have gotten to Legend you probably don’t need to consult this list at all. Here’s how you get NF though, once you have Luna’s.

4. Beloved – It’s a very…beloved sniper, what can I say? And easy to farm through with Menagerie, the rune combo being Jubilation/Any Red Rune. The god rolls are Snapshot/Quickdraw or Snapshot/Moving Target, if you ask me. I have Snapshot/Box Breathing and it works for me.

5. Jotunn – The “easy button” Fusion that launches a homing missile at your enemies, I sort of forget what they changed this quest too after the Black Armor forge changes. I think I get modified into a more normal exotic quest that you get from Ada-1 now.

6. Erentil FR4 – Erentil has been a monster for a while now, but it is getting pretty hard nerfed next season to prevent it from having insane one-hit kill range. You can get it from Banshee, turning in weapon parts, or you can get it in Menagerie with the Excess/Any Blue Rune combo. You want Firmly Planted/Rangefinder, at least on the pre-nerf version.

7. Trust – This is the gun I mostly got Luna’s with, and it still sees a lot of play in this slot if you don’t have Luna’s or Not Forgotten. Another Mengarie farm with the Desire/Any Purple Rune combo. A lot of good rolls here. I like Rapid Hit/Snapshot, Outlaw/Rampage, Outlaw/Rapid Hit, Dragonfly/Rapid Hit. Yeah I dunno, hard to go wrong.

8. The Recluse – It has been nerfed from its peak, but it’s still a beast in most situations. Get a lot of SMG kills and then get to Fabled glory rank to beat the pinnacle quest.

9. Anonymous Autumn – I am surprised there’s only one sidearm out of all 30 weapons here, but expect more of them to come. This is the “True Vanguard pick,” and his roll is Outlaw/Rangefinder. You can also get Outlaw Rampage/Kill Clip. This is, surprise, another Menagerie farm, Pride/Any Green Rune.

10. Hard Light – Hearing a lot about how between the screen shake removal and the upcoming buffs to Auto Rifles, that Hard Light could be a top choice next season. Random exotic drop, Xur sells it, catalyst is from Strikes. 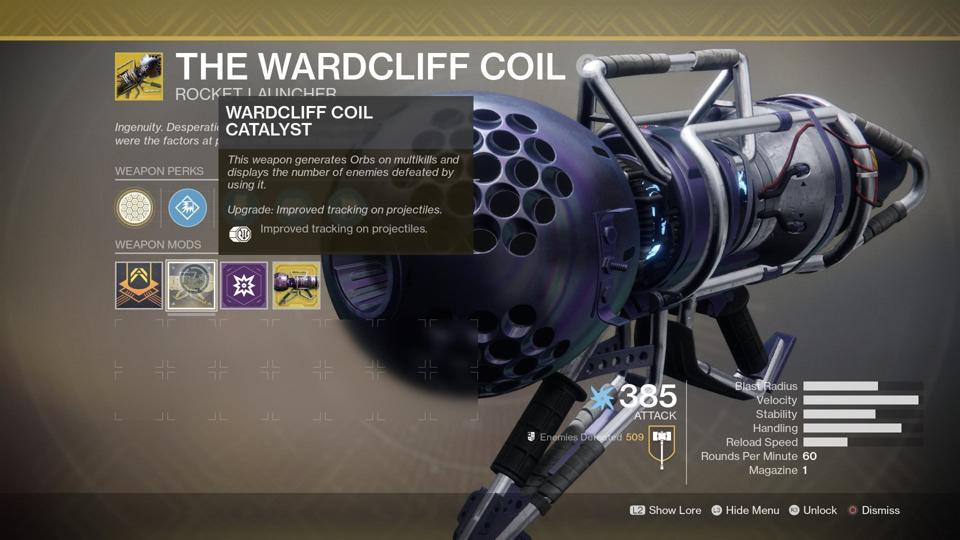 1. The Wardcliff Coil – When you want to wipe a full team bunched up, here’s your first choice. Random exotic drop, Xur sells, catalyst comes from strikes.

2. The Colony – Everyone using this to try and get their Mountaintop kills. Random drop, Xur sells, Catalyst comes from Crucible.

3. Hammerhead – Wow, is this really the first Forge weapon that made the list? This you get as a bounty from Ada-1, and the best roll is probably Feeding Frenzy/Rampage.

4. Truth – With multiple in the chamber and insane tracking, Truth is a hugely popular pick for this slot. There’s a whole exotic quest to get it, and it doesn’t have a catalyst yet.

5. Play of the Game – Crucible grenade launcher that you get from matches and from Shaxx token turn-ins. I like Autoloading/Quickdraw.

6. Roar of the Bear – You can only get this rocket launcher and there are no more Iron Banners before Trials get here, so you’re out of luck. If you have one in your vault, look for Tracking and Autoloading.

7. Pyroclastic Flow – This is the new season pass rocket launcher you can grind for endlessly with Fractaline bounties. It automatically comes with tracking, so I like Ambitious Assassin and Cluster Bombs.

8. Bad Omens – Gambit rocket launcher you can farm in Menagerie with the Ambition/Any Purple Rune combo. You want Tracking and Cluster Bombs and that’s kind of it.

9. Tractor Cannon – The boop king is a lot of fun in Crucible for easy kills and shutting down supers. Wild drop, Xur sells, catalyst drops randomly in the world.

10. Deathbringer – A solid choice for mass guardian kills if they’re too close. There was a whole quest for this that was actually a good amount of fun. Here’s how that went.