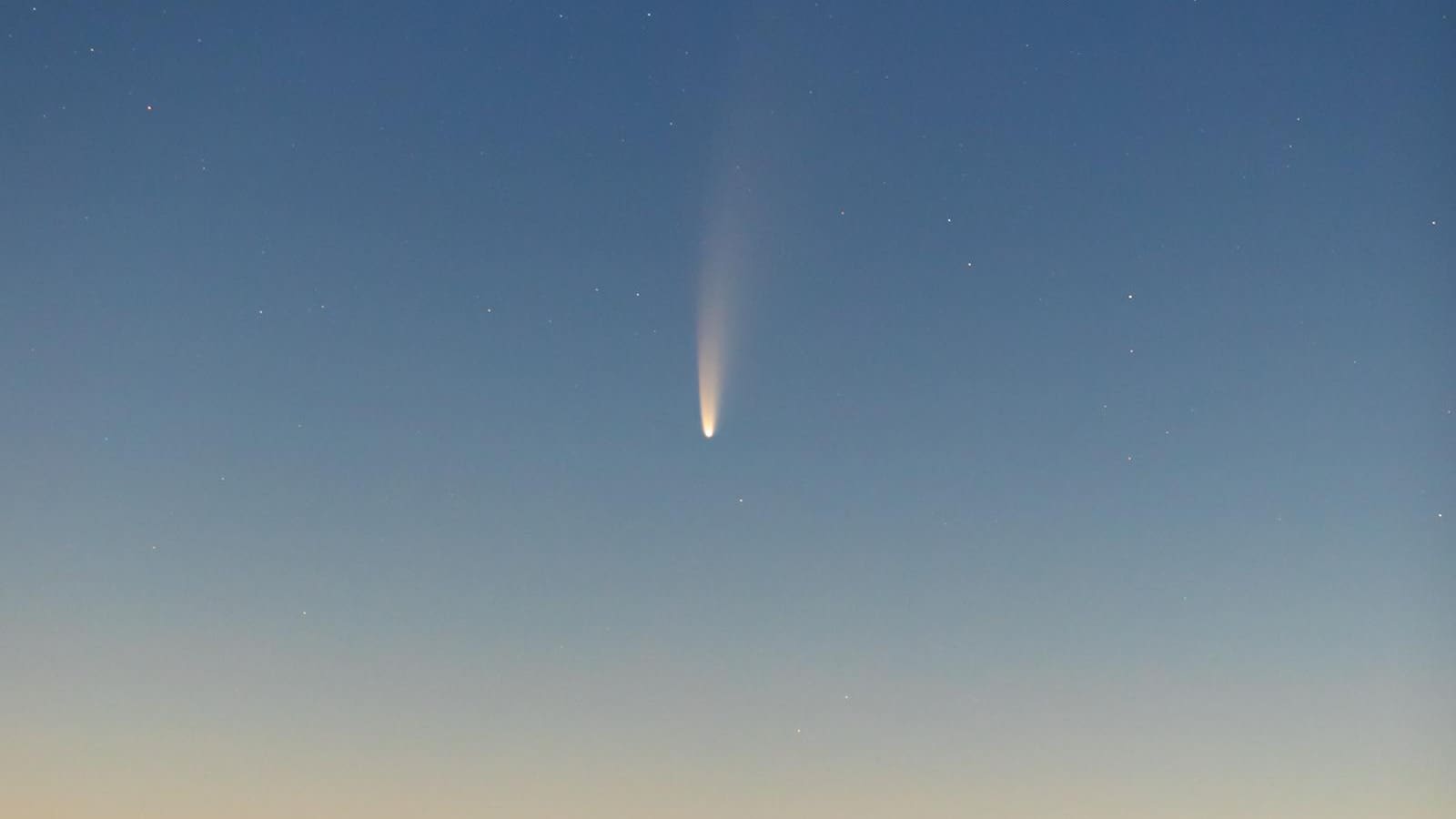 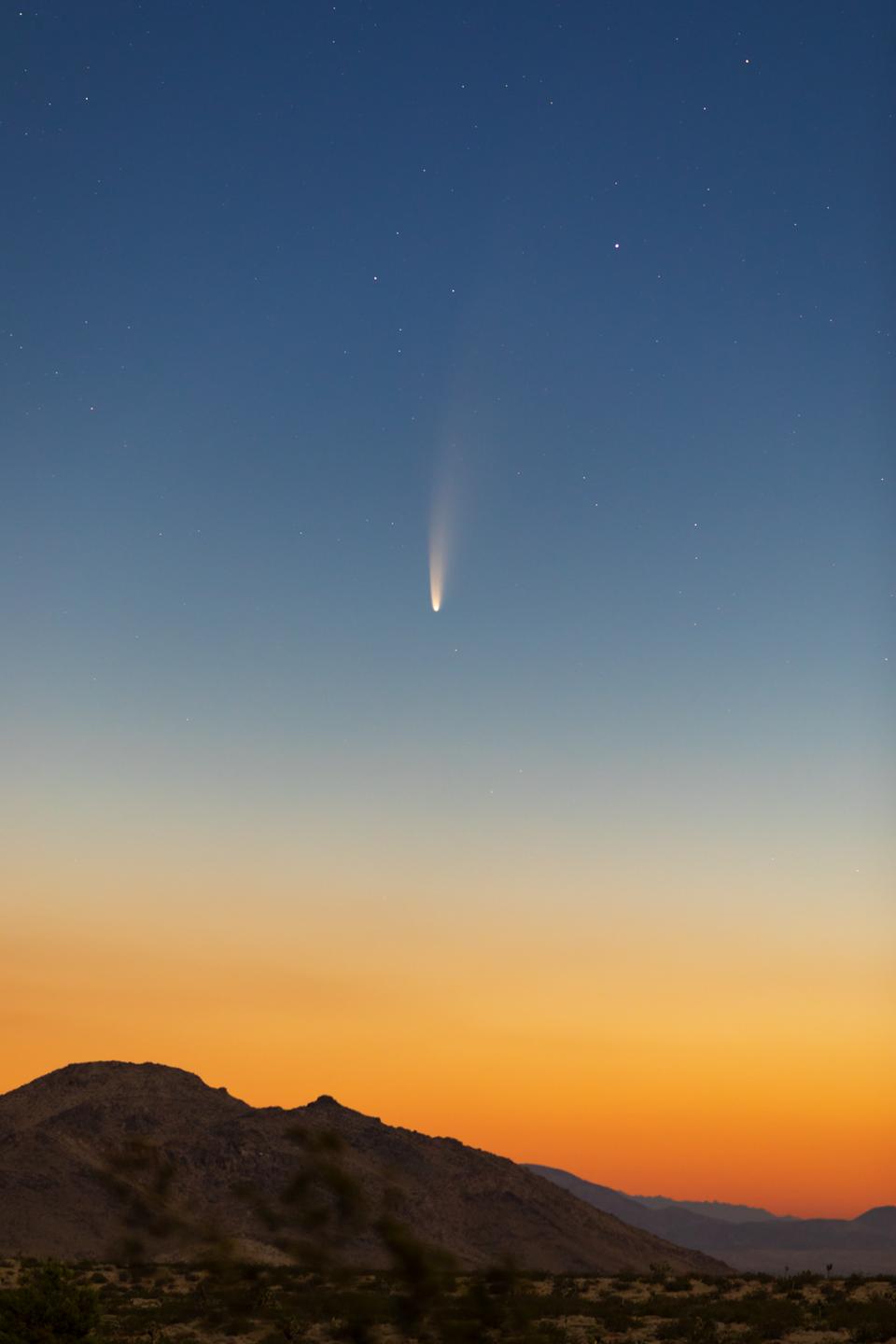 Seen here in the pre-dawn skies above the California desert, Comet NEOWISE is about to become a … [+] post-sunset object instead, making it the most spectacular comet to grace Earth’s skies in 13 years.

Every once in a while, large, icy objects pass through the inner Solar System. 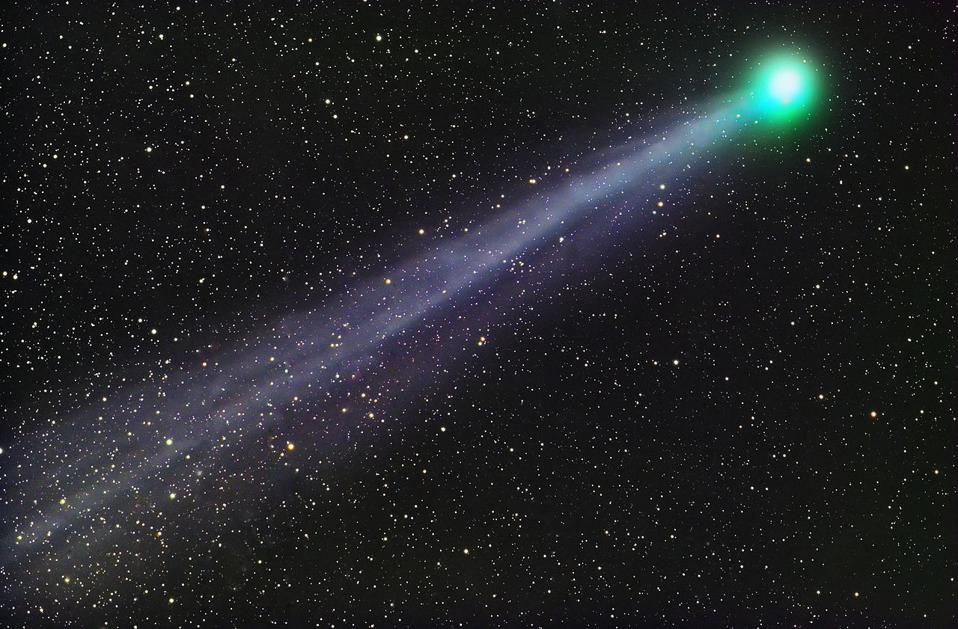 C/2014 Q2 (Lovejoy) is a long-period comet discovered on 17 August 2014 by Terry Lovejoy. This … [+] photograph was taken from Tucson, Arizona, using a Sky-Watcher 100mm APO telescope and SBIG STL-11000M camera. As spectacular as this photograph is, this comet was not visible to the naked eye.

When they near the Sun, the ices sublimate, emitting volatile gases. 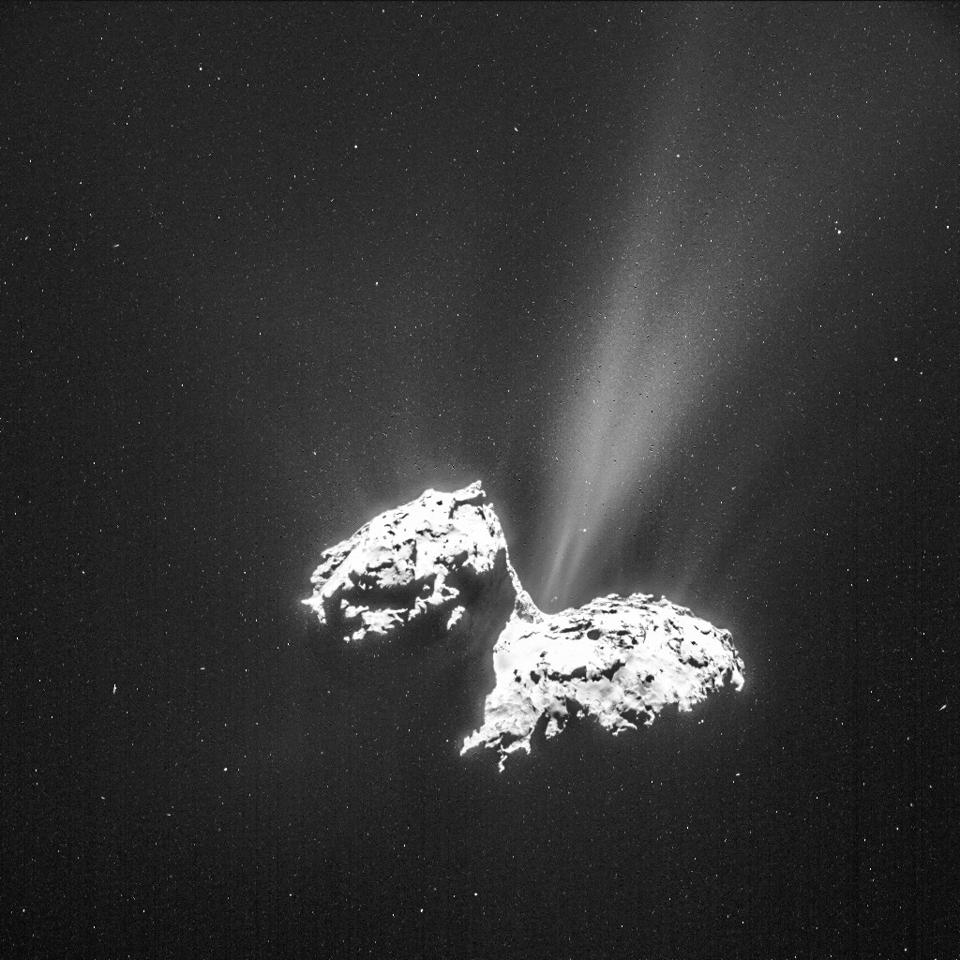 The ESA’s Rosetta mission had a close encounter with Comet 67P/Churyumov-Gerasimenko, imaging its … [+] offgassing of volatiles up close for an extended period of time.

Both dust and ions are blown off, creating spectacular cometary tails. 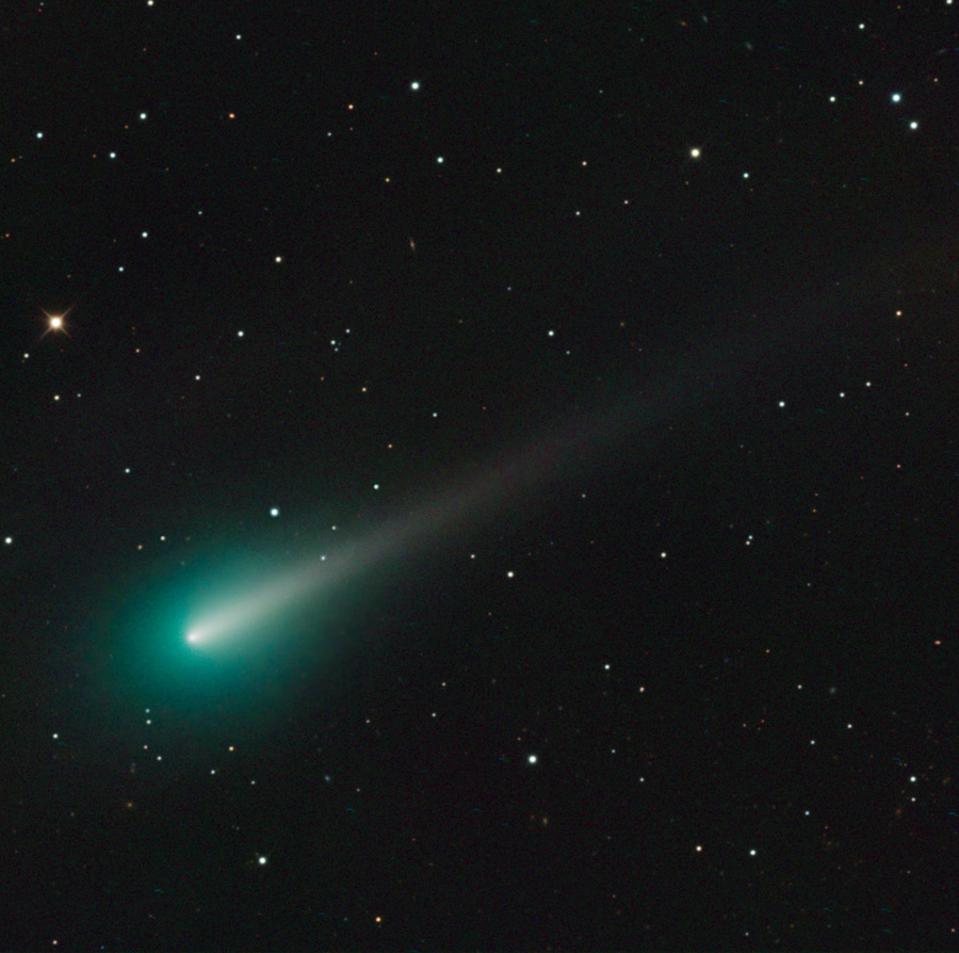 As Comet ISON passed into the inner Solar System, it developed a set of tails that pointed almost … [+] directly away from the Sun. It grazed the Sun at a distance of less than 2 million kilometers, and disintegrated thereafter from its close approach. It could have been a spectacular, great comet, but was destroyed by the Sun.

From Earth, these comets typically appear brightest during closest approach. 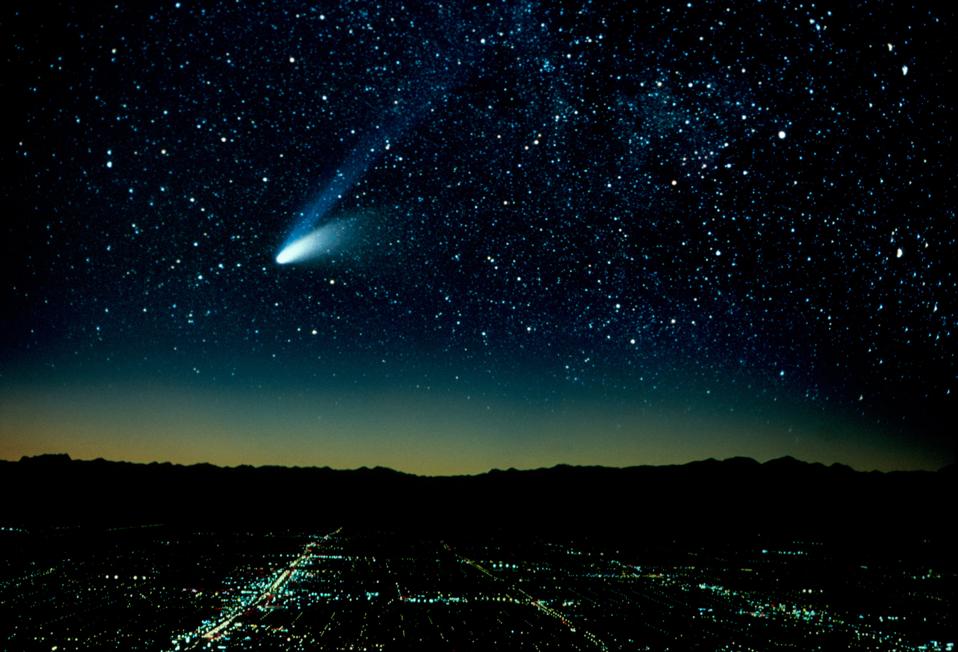 This composite image from 1997 shows Comet Hale-Bopp, the last “great comet” to visit Earth, over a … [+] bright cityscape. Note the presence of two tails to Hale-Bopp, a bright dust tail and a straight-line, bluish ion tail. (Education Images/Universal Images Group via Getty Images)

Bright, naked-eye comets are rare, with 1997’s Hale-Bopp serving as our most recent “great comet.” 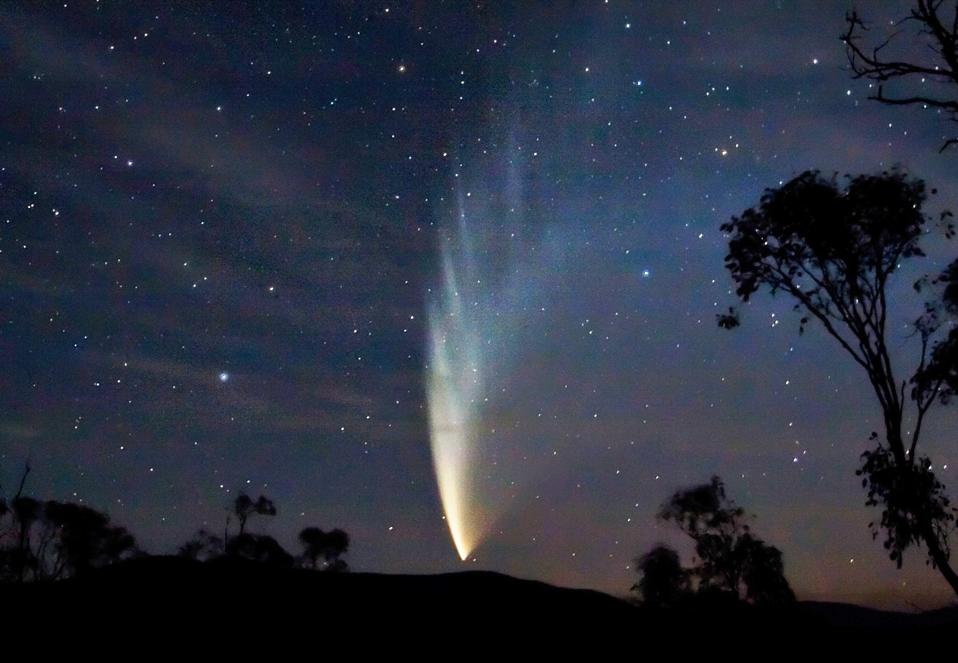 Comet McNaught, as imaged in 2006 from Victoria, Australia. The dust tail is white and diffuse (and … [+] curved), while the ion tail is thin, narrow, blue, and points directly away from the Sun.

Since then, only 2007’s Comet McNaught was comparable, primarily to southern hemisphere observers. 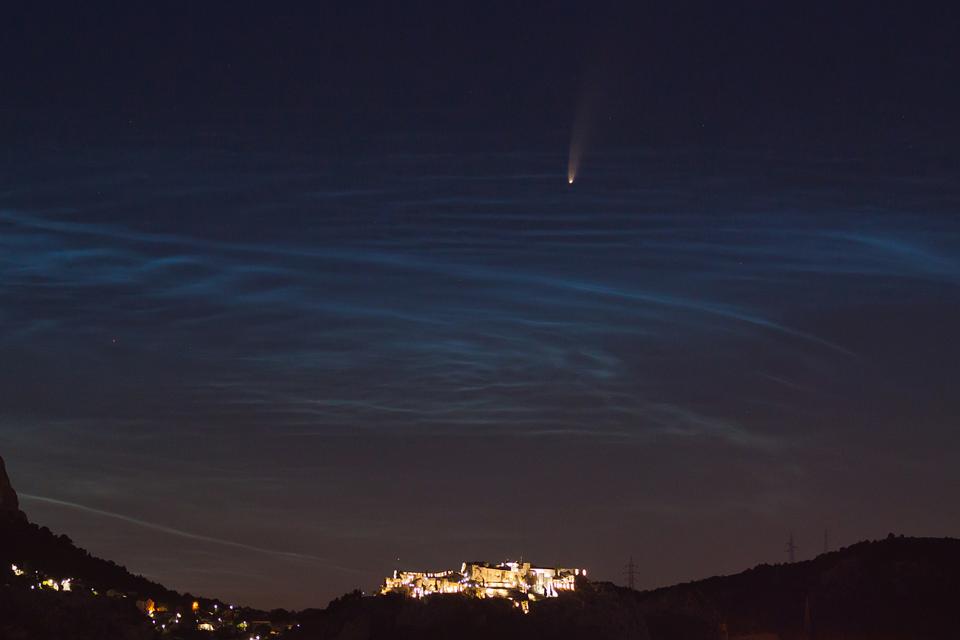 Right now, Comet NEOWISE is at magnitude +1, but its brightness is incredibly diffuse, making … [+] it difficult to see with the naked eye alone. But this has an excellent chance of changing over the next 2 weeks.

But in July of 2020, Comet NEOWISE will put on Earth’s greatest cometary show in 13 years. 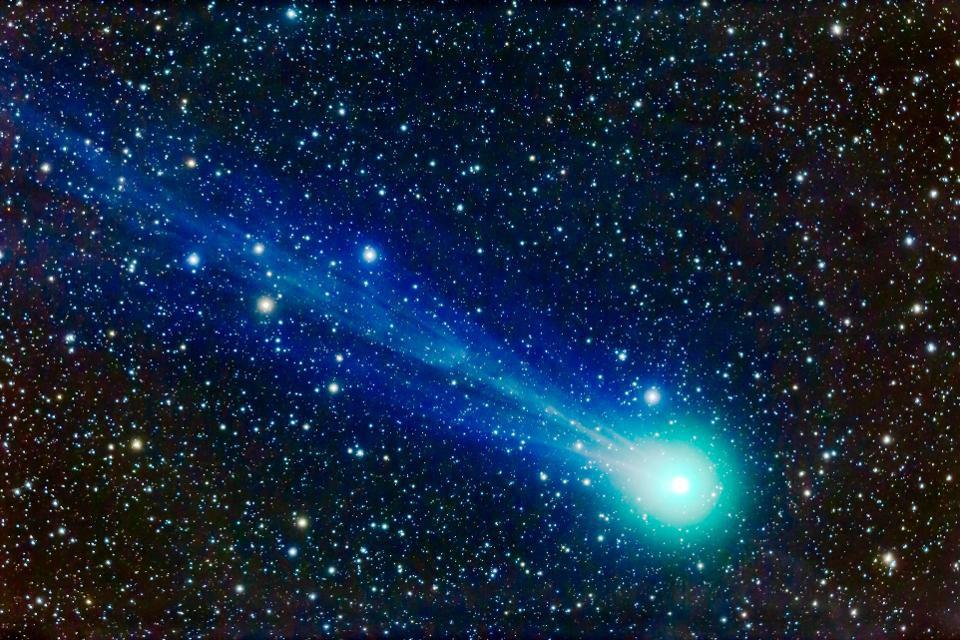 A telescopic closeup of Comet Lovejoy (C/2014 Q2) from January 17, 2015, showing structure in the … [+] ion gas tail, in the form of streamers and discontinuities. The green color in the coma is unmistakable, and is often a portent of a spectacular outburst. Through a similar setup, the current Comet NEOWISE might appear even more spectacular.

With a 6,800 year orbital period, it last appeared before the wheel was invented. 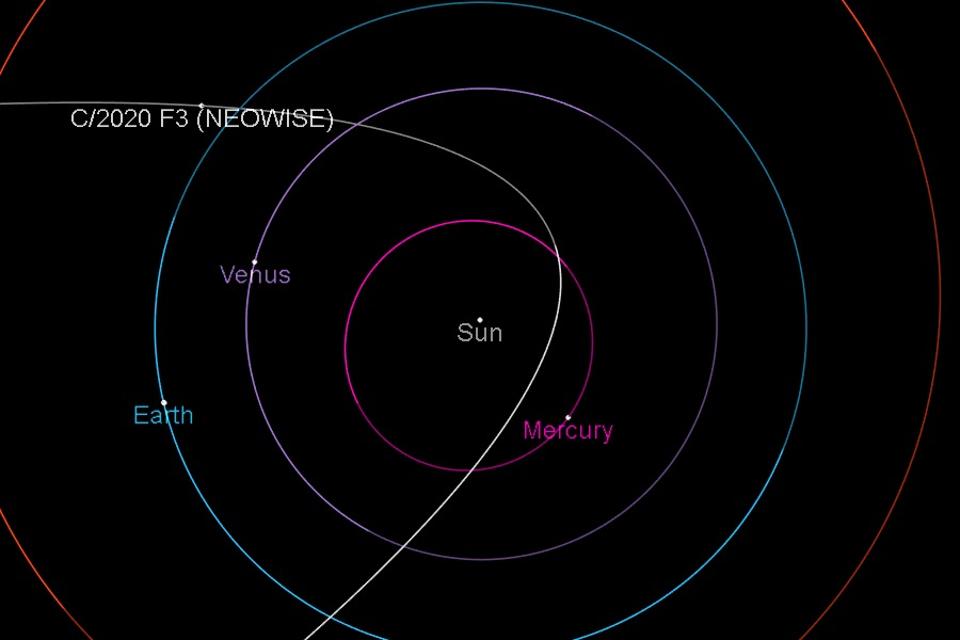 On July 3, 2020, it reached perihelion, surviving a perilous encounter with the Sun. 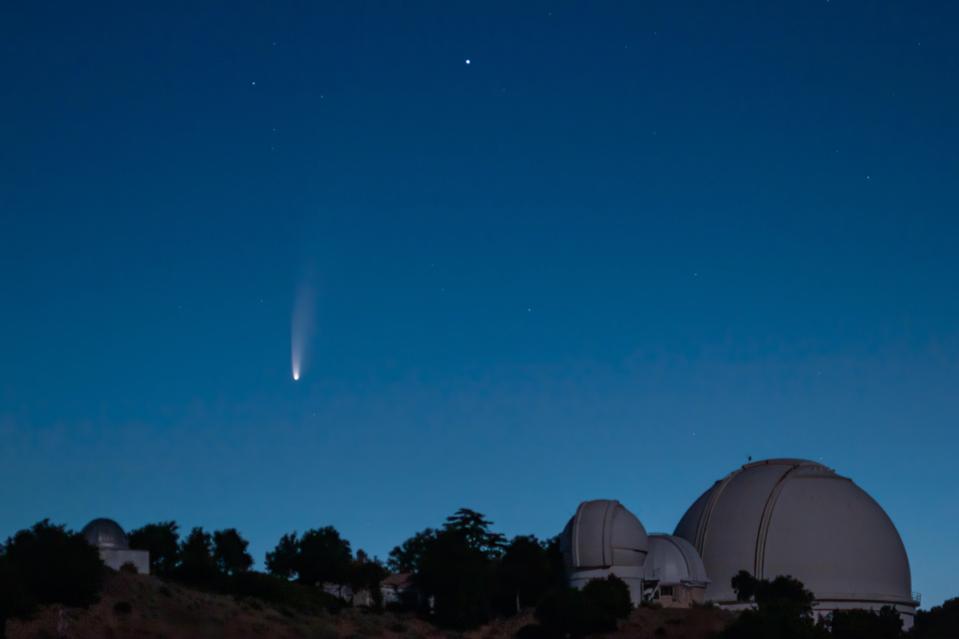 Shown here in the pre-dawn skies above Lick Observatory on July 7, 2020, Comet NEOWISE is about to … [+] make the transition from a pre-dawn to a post-sunset comet, where it should be enjoyable for a myriad of mid-to-high latitude observers in the northern hemisphere.

Since then, it’s graced our pre-dawn skies, but relative motion changes everything. 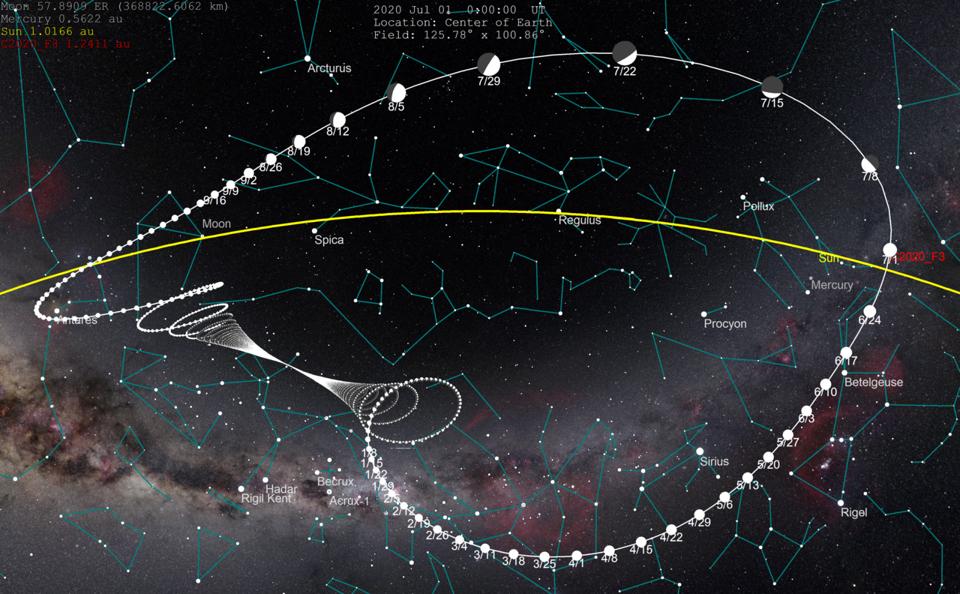 Comet NEOWISE will follow the trajectory illustrated here throughout 2020, as seen from Earth, … [+] relative to the stars in the sky. Note how rapidly it appears to move throughout the month of July, when it makes its closest approach to both the Sun (on the 3rd) and to Earth (on the 23rd). 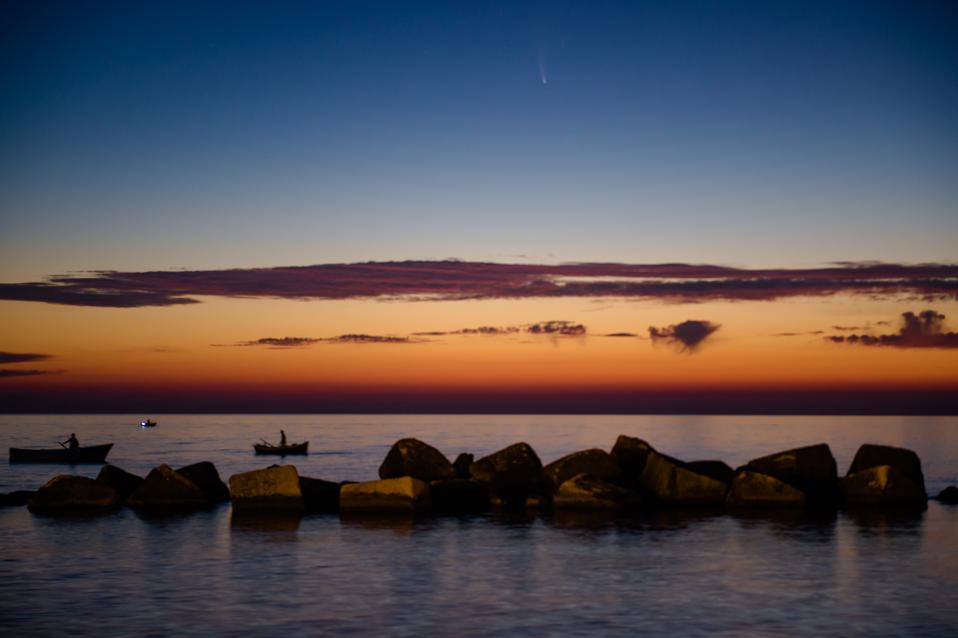 Comet Neowise (C/2020 F3) was captured here on July 11, 2020, above the Port of Molfetta in the … [+] post-sunset skies, marking one of the very first times this comet was visible from Earth after sunset, rather than in the pre-dawn skies. (Davide Pischettola/NurPhoto via Getty Images)

Although it’s brighter than all but around 20 stars, its extended, diffuse nature makes it a challenge for human eyes. 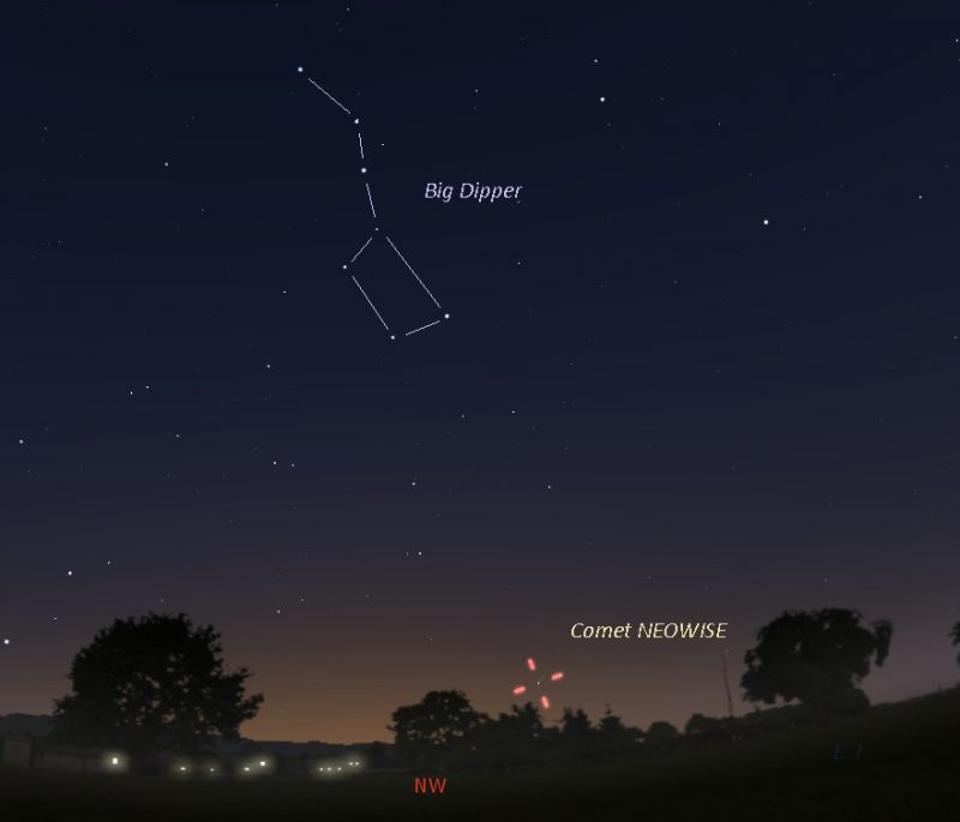 Shortly after sunset on July 13, 2020, before the sky has fully darkened, Comet NEOWISE will appear … [+] beneath the “ladle” of the Big Dipper. It will be particularly visible to northern hemisphere viewers at mid-to-high latitudes.

It’s easiest to first locate with binoculars, below the Big Dipper in the northwest skies. 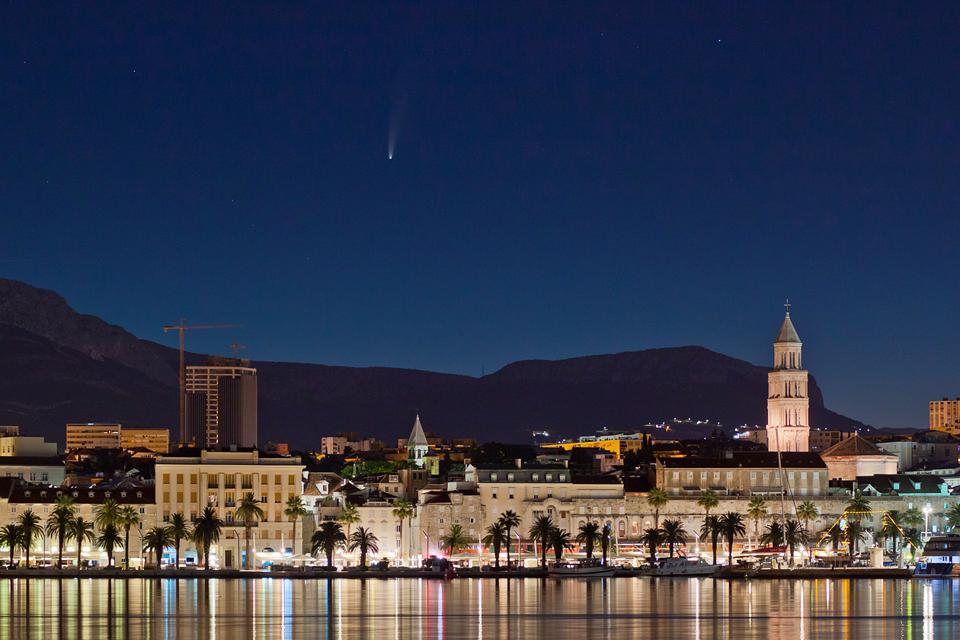 Photographed here over Split, Croatia, Comet NEOWISE appears far more spectacular in photographs … [+] than to the naked eye. It can be spotted very clearly in binoculars to someone who knows where it is; it is often identifiable without them afterwards.

It will peak on July 23: reaching its closest approach to Earth. 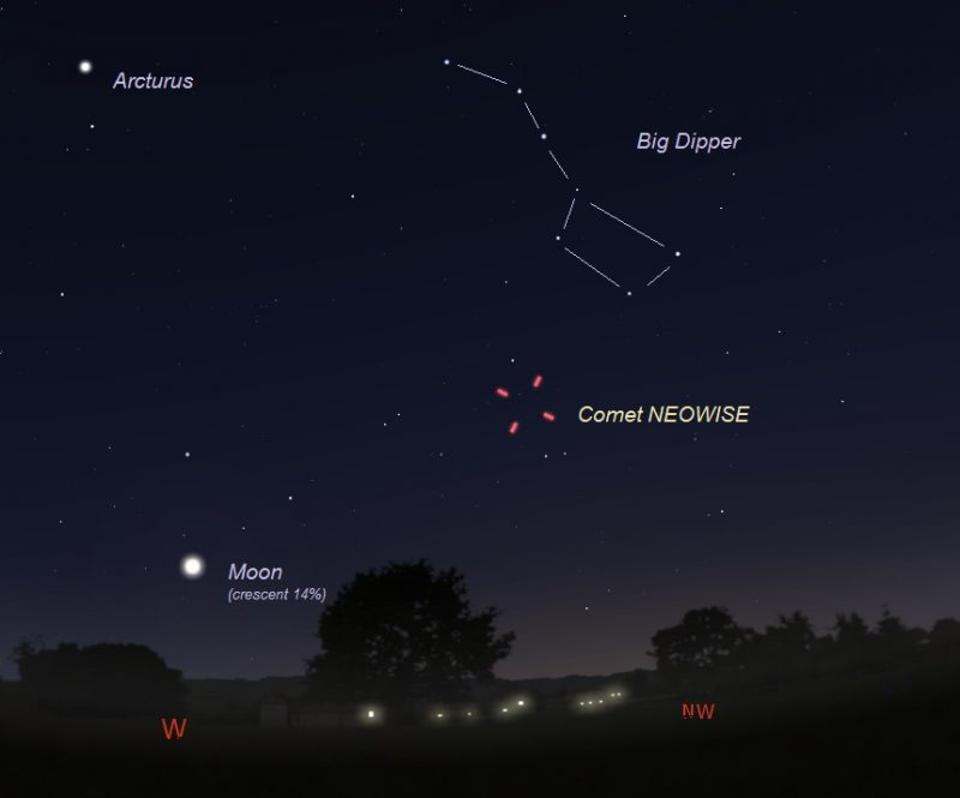 Comet NEOWISE should appear at its closest and brightest on July 23, 2020, where it appears below … [+] the ladle of the Big Dipper significantly above the northwest horizon in the post-sunset skies.

For many skywatchers, it’s already humanity’s best comet since 1997. 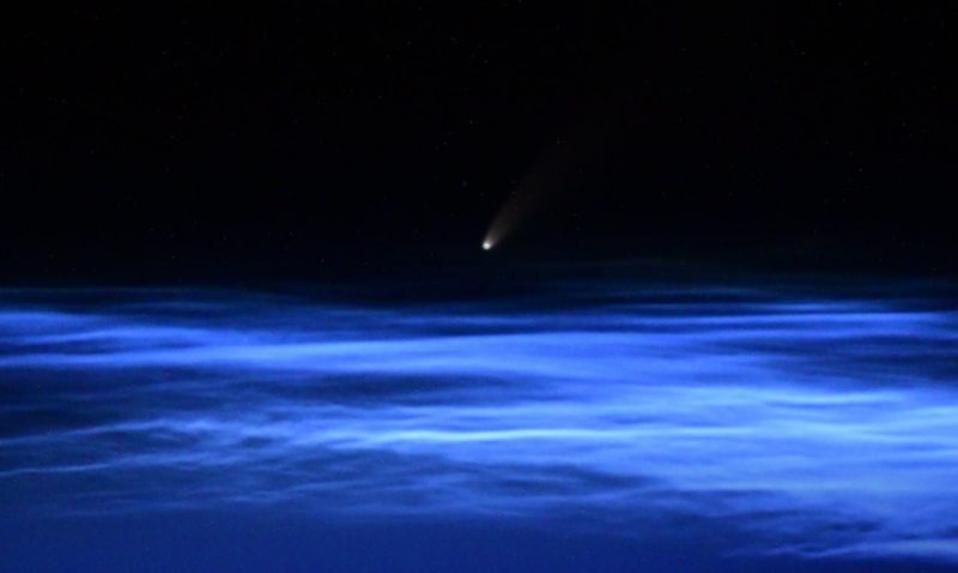 This photograph shows Comet NEOWISE above the noctilucent clouds that appear illuminated by the Sun … [+] either after sunset or before sunrise. This photo was taken from the International Space Station.